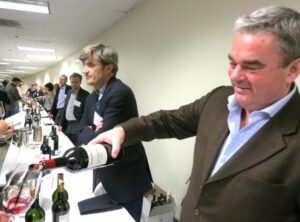 The UGCB, Union des Grands Crus de, also known as simply the UGC, is about to begin their annual grueling schedule that takes the group to numerous countries all over the world. Fortunately for wine lovers living in North America, the UGC 2016 tour begins as always, visiting cities in the United States as well as in Canada.

The UGC presents the most recently bottled vintage. The UGC 2016 tour will showcase the 2013 vintage. Yes, 2013 Bordeaux was a more than difficult vintage. Having tasted the wines, the chateaux with the ability and dedication to making the best wine possible produced forward, easy to drink wines of pleasure, and that’s with the red wines. The dry white Bordeaux wines are quite good and it’s a stunning year for the sweet wines of Sauternes and Barsac.

Even though the best wines from the 2013 vintage are the aforementioned dry and sweet, white wine, there are some interesting wines to discover from the Right Bank as well as in the Left Bank. The great thing about the UGC 2016 tour is the ability to taste with the owners and wine makers from Pauillac, St. Estephe, St. Julien, Margaux, Pessac Leognan in the Left Bank as well as growers from St. Emilion and Pomerol, and of course Sauternes!

The following cities and dates will help you find where and when you can the wines being poured during the UGC 2016 tour of America. Keep in mind that some of these events are only open to members of the trade. However, most of the UGC 2016 Bordeaux tastings are open to the general public.

January 22, Toronto, Canada – Sponsored by LCBO, the tasting is open to the public. Tickets are available from : LCBO

January 23, Montreal, Canada – Sponsored by the SAQ, takes place from 3pm to 7pm at the Bonaventure. Tickets are available from the SAQ.

January 25, New York – Ciprani on 42nd Street. This is a trade only event taking place from 1pm to 5pm. There is also a tasting is being held for the first time at Sothebys that same day.

January 28 has two tastings taking place on the same day. One is in Phoenix and the other is in Vancouver. Of course each of these 2013 Bordeaux tastings will feature different chateaux. In Phoenix, the tasting will take place at the Hyatt Regency in Scottsdale.

January 29, Los Angeles at the Fairmont Hotel for the trade, which takes place from 2pm to 5pm.

January 29, Los Angeles – There is also a tasting for the public taking place at The Museum of Flying at Santa Monica Airport – Tickets for the 2016 UGC Bordeaux wine tasting in Los Angeles are available from Wallys You can also call 310-475-0606. Tickets are $69 per person in advance, $100 at the door. Something else you should know about the Wallys 201 UGC Bordeaux wine tasting, 100% of the net proceeds from the tasting will benefit Food on Foot, a nonprofit organization providing the poor and homeless of Los Angeles with meals, clothing and assistance in the transition to employment and life off the streets.

January 30, San Francisco – The tasting at the Bentley Reserve and is hosted by K & L. The tickets are $100 and can be purchased from K & L Wine Merchants

Not all members of the UGC will attend every event. This is a list of the chateaux that will be pouring 2013 Bordeaux wines during the 2016 UGC Bordeaux tastings: