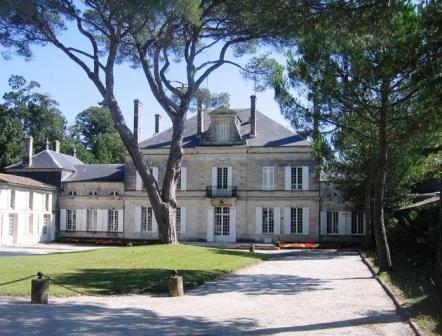 Learn everything about Chateau Batailley, Pauillac, Fifth Growth, with wine tasting notes and wine with food pairing tips. Learn about the best vintages, a history of the property, information on the vineyards and winemaking. If you want to read about other important, Bordeaux Chateaux: Links to all Bordeaux Wine Producer Profiles

In the 1700’s, the Saint-Martin family were the owners of Batailley. Chateau Batailley was well-known in those days due to its history as it was one of the older Bordeaux wine estates dating back to the 1400’s. In fact, the property took its name from a famous military battle that took place in 1452, during the hundred year war.

In 1791 Marianne and Marthe Saint-Martin sold their part of Chateau Batailley to Jean Guillaume Pecholier. In 1816 Chateau Batailley was sold to Daniel Guestier of Barton and Guestier, a famous and important Bordeaux wine negociant firm.

He acquired most of the estate and began buying more shares and land, including plots adjacent to Lynch Bages and Grand Puy Lacoste to enlarge the estate. The Guestier family was was quite well-known in Bordeaux at the time, as they also owned Chateau Beychevelle by the time of the 1855 Classification of the Medoc.

Daniel Guestier renovated the Left Bank chateau and improved the Bordeaux wine making facilities of Batailley. He died in 1847. By that time, Chateau Batailley had a good reputation. The chateau was managed by Guestier’s three children until they sold it in 1866.

It was acquired by a Parisian banker Constant Halphen. Upon Halphen’s death in 1932, the Borie family purchased the estate and continued to make the wine for another decade before the vineyard was cut in two, which as you will see, gave birth to another wine.

In 1961 the estate was transferred to Marcel´s daughter Denise and her husband Emile Casteja. Their son Philippe Casteja, with the help of his son, Frederic Casteja manages Chateau Batailley today. The family also owns Chateau Lynch-Moussas, Chateau Trottevieille and other Bordeaux estates as well as a massive Negociant company, Borie-Manoux, which dates back to 1870, when it was founded by Pierre Borie.

In 2006 Chateau Batailley renovated and modernized their vat rooms and winemaking facilities. 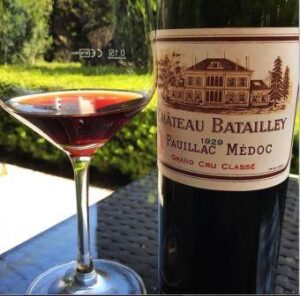 On average, the vines are 40 years of age. The vineyard is planted to a vine density of 8,000 vines per hectare. The estate is currently experimenting with biodynamic farming techniques on a 5 hectare parcel of vines.

To produce the wine of Chateau Batailley, vinification takes place in a total of 60, temperature controlled stainless steel vats that vary in size from 110 hectoliters to 130 hectoliters.

The vats do not vary much in size, as the majority of parcels are quite similar in size at close to 1 hectare per parcel. The 60 vats correspond directly to the number of parcels in the vines allowing for precision fermentations. Malolactic fermentation takes place in vat.

Chateau Batailley can be enjoyed on the young side with a few hours of air. But I find it too tannic to enjoy without cellaring. I find that the wine is usually better with 8-12 years of bottle age. Of course that can vary slightly, depending on the vintage character.

In the best vintages, the wine will be at its best when it reached peak maturity between 10-25 years of age after the vintage. Young vintages can be decanted for an average of 2-3 hours, give or take. This allows the wine to soften and open its perfume. Older vintages might need very little decanting, just enough to remove the sediment.