Learn everything about Chateau Haut Batailley, Pauillac, Fifth Growth with wine tasting notes, and wine with food pairing tips. Learn all the best vintages, a history of the property, information about the vineyards and winemaking. If you want to read about other important, Bordeaux Chateaux: Links to all Bordeaux Wine Producer Profiles

Francois Borie kept the smaller part of the Medoc vineyard which became Haut Batailley. Chateau Batailley went to his brother, Marcel Borie. François Borie was able to enlarge the size of the Haut Batailley vineyards, due to the purchase of an additional 15 hectares of vines from Chateau Duhart-Milon in 1951.

In 1953, after Francois Borie passed away, his daughter Françoise de Brest-Borie inherited Haut Batailley. She asked her brother Jean-Eugene Borie to manage the estate for the family. Following in his father’s footsteps, his son François-Xavier Borie took charge.

Along with the help of his daughter, the charming and attractive Emeline Borie, they continued managing the property for years. In 2006, Francois Xavier Borie began a renovation and modernization of the wine-making facilities and cellars.

This allowed Chateau Haut Batailley to begin doing parcel by parcel vinification. This was a huge change for the estate. To understand how important this renovation was, you have to keep in mind that there is no actual chateau at the vineyard.

Until the 1970s, the wines were made at another Borie family-owned estate, Chateau Ducru Beaucaillou in St. Julien. Once the wines were vinified, they were moved to Haut Batailley for barrel aging.

Chateau Batailley was ably managed by the Francois Xavier Borie Family who also own Chateau Grand Puy Lacoste until 2017. Things changed at the property in 2017 when the Cazes family, of neighboring Chateau Lynch Bages purchased the vineyard from Françoise Des Brest.

The sale caused some issues as François Xavier Borie, who had just finished making the 2016 vintage, was also interested in purchasing the vineyard. Jean Charles Cazes took control of the estate in 2017. While he’ll be responsible for selling the previous vintage, 2017 will be the first harvest the Cazes family will be completely responsible for.

The first change at the chateau was a facelift. The previously drab, sandy walls were painted bright pink. Now, you can see the chateau all the way from Saint Julien! The next step was cultivating 16 additional hectares of vines. 2 more hectares were planted in 2020. A needed renovation of the cellars is also underway. 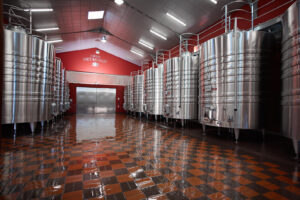 The 41 hectare Bordeaux vineyard of Haut Batailley is planted to 62% Cabernet Sauvignon, 36% Merlot and 2% Petit Verdot. The vineyard year has gone through a major replanting project since the Cazes family took over the estate. They increased their plantings with 19 hectares of previously fallow parcels Those vines will be integrated into Chateau Haut Batailley.

The vineyard is located inland, off the D1, close to the southeastern side of Pauillac. You can divide the vineyard into 2 parts, with a portion of the vines planted directly behind the chateau on what is known as Petit Batailley.

They share this part of Pauillac with Chateau Latour. The other part of their vineyard is due north on the Bages plateau, next to Chateau Lynch Bages.

Originally the second wine was called La Tour L’Aspic. The name was inspired by a white tower located on the property that was created in 1875. Starting with the 2017 vintage, a new second wine, with a completely different label was created, “Verso”.

For a period of time, the estate also produced a third wine, La Couronne, which was a parcel selection. But that wine is no longer made. On average, the production is close to 9,000 cases of Chateau Haut Batailley per year.

Chateau Haut Batailley can be enjoyed on the young side with decanting. Young vintages can be decanted for an average of 2-4 hours, give or take. This allows the wine to soften and open its perfume. Older vintages might need very little decanting, just enough to remove the sediment.