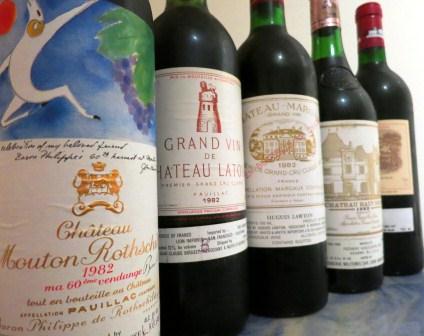 Learn everything you need to know about all the different classifications of Bordeaux wine.

The French love to classify just about everything including their wines and the various wine regions, vineyards and chateaux of Bordeaux are no exception. Due to the fact of its size, over 120,000 planted hecares of vines, volume, wide range of terroirs and having as many as 60 separate appellations, The Bordeaux Appellations Guide Bordeaux is the most classified wine region in world!

Simply, put, the best Bordeaux wines from the Left Bank were classed according to their price and quality in five different classes; First Growth, Second Growth, Third Growth, Fourth Growth and Fifth Growth. The sweet, white Bordeaux wine of Sauternes and Barsac were also classified in the same 1855 classification.

There are those that say the 1855 classification is outdated. True, if done today, there would be numerous changes to what took place in 1855. The vineyards have changed, some estates are no longer in existence.

There are chateau producing wine well above their previous level of growth while there are perforce other estates making wine that is not at the level expected of their classified status. And none of that takes into consideration all the stunning wines from the Right Bank being produced in Pomerol and St. Emilion!

There are also wines from the lesser known Satellite Appellations that would surely merit inclusion as equal to 5th Growth status. The truth is, at the end of the day the price the marketplace sets the price and that price.

The market setting the price predates the 1855 Classification for the determination of the true level of status and classification each chateau and vineyard deserves. Still, if you think about it, when you recognize that you’re really only considering the Left Bank with the original 1855 classification, as hard as it is to believe, the majority of the 1855 classification remains valid today!

What makes that even more amazing is that the 1855 Classification at more than 160 years old was put together over just a few short weeks and if you really look at it objectively, for what it covers, it’s still fairly reliable today!

Following the 1855 Classification of the Medoc, it took 100 years until the next major classification occurred, which took place in 1955, when Saint Emilion, became the first and still the only Right Bank appellation to classify their wines.

Pomerol remains steadfast in their refusal to classify their wine or terroir. And with the marketplace paying more money for the what are really the best wines from appellation in each vintage, why should they bother to change and classify their wines?

The reason for this is simple. In 1885, it was the chateau that were classified. In St. Emilion, it is the terroir, and to some extent the wine and the estate that is classified.

Clearly the climate and vintage conditions are some of the key factors creating the character and style of wine a vineyard can produce. However, terroir or soil alone does not make a quality wine. The winemaking decisions of the grower and winemaker can have an equal, if not more of on impact on the quality and style of a wine.

If that was not the case, how do you explain two completely different expressions of wine produced from the same vineyard in the same vintage? Because of those reasons we outlined, those are the reasons and logic behind updating the classification of Saint Emilion every 10 years.

No changes have taken place to the 1959 classification of Graves. With the classified estates wanting to hold on to their status, and as they hold the majority of the great terroir in the appellation, it is unlikely that any changes will take place.

In theory, the Graves classification could be updated to reflect some of the new, producers that are making wine at a higher level than some of the previously classified estates. But getting those established properties to recognize and agree is going to be close to impossible to accomplish.

Almost as complex as the classification of St Emilion, but not nearly as acrimonious is the Crus Bourgeois Classification which continues to change time and time again. For more than a decade, believe it or not, that classification was updated on a yearly basis!

Below you will find links to detailed, current articles on the various classifications of Bordeaux wines.