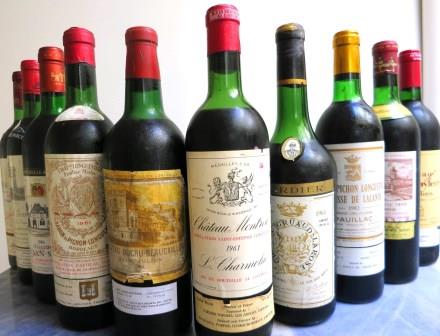 Learn everything about Second Growth Bordeaux.

The links on the left side of the page bring you detailed profiles of all Second Growth Bordeaux producers. The pages offer numerous, wine tasting notes, information on the vineyards and winemaking, images, detailed histories and wine buying guides.

The 1855 Bordeaux classification came up with a ranking of the best Bordeaux wines in five, unique classes for the red wines. The wines included were all from Medoc, except for the already legendary Château Haut-Brion, which was from Graves and not from the Left Bank, like all the other classified growths. Chateau Haut Brion had to be included in the original classification.

In 1855, Haut Brion was already one of the world’s most famous wines. More importantly, the wine sold for as much, if not more money than the other First Growth wines of the Medoc!

In the Classification, the rankings were determined by in large part, by their selling price over an extended period of time. In this case, when the official rankings for the 1855 classification were produced, the average selling price covering the period of 1815 to 1855 was considered.

In all, a total of 61 Bordeaux chateaux are included in the 1855 Bordeaux Classification for chateaux making red Bordeaux wine.

Second Growth Bordeaux wine was selling for an average of 2,500 and 2700 French Francs per barrel. If only the spread was that close today!

To help you understand the meaning of the term “Second Growth Bordeaux,” you can look at it like this as a general idea. The 1855 Classification placed the top wines of Bordeaux in five different ranking categories. The ranking categories were called Growths.

But they provide you with a good idea on what the term Second Growth means in relationship to the other Classified Growths in Bordeaux.

Over the years, a new term developed, Super Seconds. The consumer marketplace eventually came to create its own classification of Second Growth Bordeaux. These wines sell for a price today that is often between the First Growths and the other Second Growths.

If changes were made to the 1855 Classified Second Growth wines, we think would see a lot of movement, both, with estates that could deserve First Growth status, and down, as there are 4 notable chateau that are not producing wine worthy of their Second Growth status and they should be demoted.

Who knows, perhaps an official new ranking could be added, which would include the wines that truly deserve their unofficial, Super Second classification that the market has awarded to a handful of wines!

Red Bordeaux wine was not all that classified in 1855. The sweet white wine of Sauternes and Barsac, were also included in the original 1855 Classification, but with only two classes, First Growth and Second Growth. For a look at the 1855 classification of Sauternes wines” List of 1855 Sauternes- Barsac Classifications