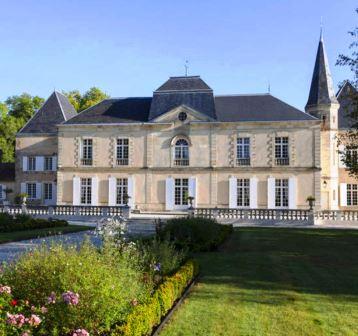 Learn everything about Chateau Lynch Moussas, Pauillac, Fifth Growth, with wine tasting notes and wine with food pairing tips. Learn the best vintages, a history of the property, information on the vineyards and winemaking. If you want to read about other important, Bordeaux Chateaux: Links to all Bordeaux Wine Producer Profiles

The classically designed chateau was constructed in 1850. In 1919, Chateau Lynch Moussas was purchased by the Casteja family and its negociant arm, Borie Manoux, which owns numerous other Bordeaux estates in the Medoc and the Right Bank including Chateau Batailley and Chateau Trotte Vieille. At the time of the purchase, they also owned Chateau Duhart-Milon.

Starting in 1970, Emile Casteja began managing Lynch Moussas. However, it was a difficult task in those days as the Pauillac vineyards and estate had become completely dilapidated by that point in time. Less than 10 hectares remained under vine. In 1970, Chateau Lynch Moussas received a complete overhaul of the Medoc vineyards and winemaking facilities.

The vineyard, like many estates in Bordeaux has vines in various different communes in the appellation. Lynch Moussas has vines planted not far from Pichon Lalande, Grand Puy Lacoste and Batailley. But there best parcels are placed close to the chateau.

On average, the vines are 25 years of age. The vineyard is planted to a vine density of 8,300 vines per hectare. The terroir of Chateau Lynch Moussas is mostly gravel, clay, sand and limestone based soils.

Lynch Moussas is a massive estate. Much of their property is not cultivated with vines. In fact, close to 140 hectares of land are devoted to greenery, forest and park lands.

The wine of Lynch Moussas is aged in 60% new, French oak barrels for an average of 18 months. There is a second wine, Les Hauts de Lynch-Moussas, which made its debut in 2001. On average, Chateau Lynch Moussas produces close to 20,000 cases of wine per vintage.

Chateau Lynch Moussas can be enjoyed on the young side with decanting. Young vintages can be decanted for an average of 1-3 hours, give or take. This allows the wine to soften and open its perfume. Older vintages might need very little decanting, just enough to remove the sediment.