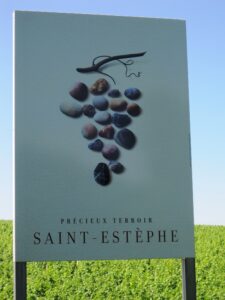 Learn everything about St. Estephe Bordeaux Wine in our complete guide, with information on the history, character, and style of all the best wines and wineries in Saint Estephe, with links to detailed profiles on every wine producer, wine tasting notes, top ten facts about St. Estephe, information on vineyards, plus images, ratings, reviews, histories, and wine buying guides, as well as wine and food pairing tips for the wines of Saint Estephe.

Complete Guide to the all the best wines, vineyards, producers and chateaux in St. Estephe.

Overview of the St. Estephe appellation: The best of these wines from the northernmost appellation of the Medoc offers purity and intensity that is seldom found in other Bordeaux wines. However, the region also produces a myriad of wines that are rustic and austere in style.

Cabernet Sauvignon and Merlot are the kings here. Even though some Cabernet Franc and Petit Verdot are planted in the region, they only play a minor role.

While St. Estephe is close to the same size as Pauillac and is located right next door to Pauillac, St. Estephe has very few 1855 Classified Growths. What savvy consumers can find in St. Estephe are numerous Cru Bourgeois wines that are easily at the level of many 5th growths, yet they sell for a pittance when compared to numerous more expensive wines from the Left Bank.

If a new classification of the Medoc ever took place, there are numerous candidates for Fifth Growth status from Saint Estephe that are producing wine as good or better than several of the better known, Fifth Growth classified wines today.

Size of St. Estephe appellation: St. Estephe, with 1,377 hectares under vine is the largest of the major, Bordeaux appellations in the Medoc. There are roughly 136 growers in Saint Estephe. Of those growers, there are about 56 different chateaux and roughly 80 growers that provide their harvest to negociants or cooperatives.

On average, 585,000 cases of wine are produced here each year. St. Estephe is located in the most northern part of the Left Bank. The St. Estephe appellation borders the northern end of Pauillac, next to Chateau Lafite Rothschild, in the middle of Bordeaux and the Pointe-de-Grave.

You know you are instantly in the St. Estephe appellation because once you have driven past Lafite Rothschild, the first thing you see when traveling north, on the right hand side of the D2 highway is the famous frontage of Chateau Cos d’Estournel.

Even though Saint Estephe is the largest major appellation in the Medoc, it’s interesting to note that while all the other major appellations in Bordeaux are created from several communes, that is not the case with St. Estephe. The entire region is centered around the village of St. Estephe.

There are no other villages or communes in the region. There are however a series of small hamlets, (hameau in French) that are in essence lieux-dits, or vineyards; Blanquet, Leyssac, Marbuzet, Pez, and St. Corbian for example that make up the region. St. Estephe has a long history in Bordeaux.

In the late 1600s, the region was better known under the name of Saint Esteve de Calonne. Saint Esteve comes from the original name for Saint Stephen, who is the Patron Saint of Stonemasons. The region changed its name at some point to St. Estephe in the early 1700s. 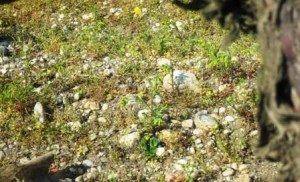 Terroir and soil of St. Estephe: Even casual observers of the soils can see the rich mixture of rocks, clay, limestone and gravel that rests on the surface and of course below, deep in the terroir. Beneath the surface lies a complex blend of different soils, subsoils and terroirs.

St. Estephe, because it is not far from the river, with its slopes and elevations, offers a myriad of microclimate as well for the top chateaux. These divergent terroirs appear all over the Saint Estephe appellation. The slopes and elevations range from 0 to 20 meters in St. Estephe with the highest elevation located on the hill of Cos. The upper terrace of St. Estephe is based on sand and gravel.

The lower terrace has more gravel soils. If you move east, you encounter soils featuring marine limestone as a major component of the terroir. The lesser St. Estephe areas feature terroir with lighter, sandy soil, along with a blend of sandstone and quartz. When you head west, you encounter more sand, small gravel pebbles, and clay in the soil.

Lastly, travel south and look below the surface and you will uncover a concentration of subsoils filled with loam. As you can guess, the gravel and clay are paramount to the wines of St. Estephe.

A large part of what makes Saint Estephe however is the addition of clay in the soil. You find more clay in St. Estephe than you do in Pauillac, St. Julien or Margaux. This is important to know because while the gravel assists with natural drainage, holds the warmth of the sun, reflecting its light and heat to the vines, which in turn aids the grapes ability to ripen, the clay retains moisture in the hot, dry vintages.

That is why vintages like 2003 and 2009 were so successful in St. Estephe. The rich diversity of terroirs and soils explain the diverse styles of Bordeaux wines that come from St. Estephe.

Previously, well before the 1982 vintage, the wines of St. Estephe were always thought of as the biggest, most rustic, tannic wines of Bordeaux. That is not the case today at the top estates in the St. Estephe appellation.

The finest terroir in the appellation is situated on the hill of Cos, where Chateau Cos d’Estournel is located. Not far from the vineyards of Cos d’Estournel, you have perfect views of their neighbor, Chateau Lafite Rothschild.

In large part, the combination of the percentages of grape varieties cultivated and the terroir, is what determines The difference between Right Bank wines and Left Bank wine. To get an idea of how the soil and terroir of St. Estephe compares to the other important appellations in Bordeaux; The terroir and soil of Bordeaux

The taste, character, and style of St. Estephe wine: Due to its massive size, it’s easy to find a diverse array of wines from growers in the St. Estephe region. The top two producers are quite different in style. Chateau Cos d’Estournel can produce the ripest, most exotic style of wine in the appellation. Chateau Montrose is more structured, powerful, denser and perhaps longer lived.

In vintages where the grapes are capable of fully ripening, the wines from those two chateaux, as well as at the other top estates are never harsh. However, in lesser vintages, or from numerous smaller estates, the wines can be some of the more rustic, austere wines in the Left Bank. When mature, the wines of St. Estephe deliver rich, concentrated, complex wines with notes of cassis, fresh blackberry, tobacco, cigar box, stone, and Asian spice.

The Top Ten Facts You Need to Know about St. Estephe

#1 St. Estephe, due to its cooler terroir is usually the last major appellation in the Medoc to start harvesting.

#3 St. Estephe has the largest concentration of Cru Bourgeois classified growths in the Medoc, with 35 chateaux classed as Cru Bourgeois.

#4 St. Estephe, with 1,377 hectares under vine is the largest of the major Bordeaux appellations in the Medoc.

#5 St. Estephe is located in the most northern part of the Left Bank of any of the major appellations.

#6 St. Estephe has large concentrations of clay in their terroir, which helps the region in the hot, dry vintages, as well as provide great soils for Merlot.

#7 St. Estephe vineyards have slowly been increasing the amount of Merlot planted in the vineyards for several decades.

#8 St. Estephe has the least amount of chateaux named in the 1855 Classification of any of the major appellations in the Medoc. While only 5 estates were classified in 1855, they occupy 20% of the entire appellation.

#9 Cabernet Sauvignon and Merlot are the two most important grapes planted in the St. Estephe appellation.

#10 St. Estephe was at one point in time considered to produce the most rustic, hard wines in Bordeaux. With the search for riper fruit, better vinification and more Merlot in the vineyards, that is no longer the case. 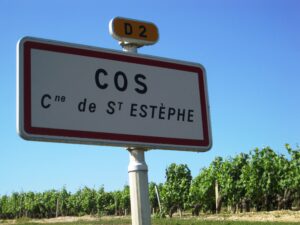 Most of that has to do with the fact that during the 1940s, 1950’s, 1960’s and 1970’s, the chateaux in the region did not have the funds needed to make the investments that were needed to produce the best wines possible.

That situation began to change for the better during the early 1980s and continues improving today as owners now continuously make much-needed investments in their vineyards and cellars. To read about vintages from St. Estephe and all the other Bordeaux appellations Bordeaux Vintage Charts 1959 Through Today If you are interested in reading more detailed information on other vintages for St. Estephe and all the top Bordeaux appellations, please read: Bordeaux Year to Year Detailed Vintage Reports 1900 to Today

Because St. Estephe is the appellation furthest north, it’s a little cooler and is often the last area in the Medoc to harvest. The proximity to water aids the vines in the dry vintages, while the clay helps the soil retain moisture. It is interesting to note that St. Estephe not only borders Pauillac, with some of the vineyards in the appellation abutting Chateau Lafite Rothschild which is in the neighboring appellation of Pauillac.

The grapes of St. Estephe: Over the past several decades, the general trend in the St. Estephe vineyards has been to add more Merlot, which has added a lot of softness to the tannins and the wines.

Merlot works well in the appellation due to a large amount of clay found in the soils. The trend to pick later, coupled with global warming has also helped the wines of St. Estephe. Smaller plantings of Cabernet Franc and occasionally Petit Verdot are also planted in St. Estephe.

Today is a great time to be a lover of the wines from the St. Estephe appellation. While Montrose and Cos d’Estournel remain the two best wines, Calon Segur as of 2014 is also in contention to be among the elite chateau in the region.

1855 Classification of St. Estephe: Only five wines from St. Estephe were included in the original 1855 classification. Those classified vineyards make up about 20% of the entire St. Estephe appellation.

That is less than every other commune in the Left Bank. In the 1855 Classification, the top two chateaux of Saint Estephe, are the same top two wines of the appellation today, Cos d’Estournel and Montrose.

Although starting with the 2014 vintage, Chateau Calon Segur began producing some of the finest wines in the history of the estate making it a three-way contest for the best wine of the Saint Estephe appellation!

AOC Law and Rules for St. Estephe: What does it take to be a Saint Estephe wine? According to the decree of November 14, 1936, the St. Estephe AOC wines must meet precise production conditions: grape varieties, minimum sugar content, alcoholic strength 10.5% alcohol, and limited yields. There is also a yearly blind tasting of each new vintage produced in the appellation.

You can also read detailed information about other, smaller chateaux, wines, and vineyards located in St. Estephe as well as in other appellations here: Extensive Guide to the Smaller, Lesser Known Bordeaux Chateaux, Vineyards