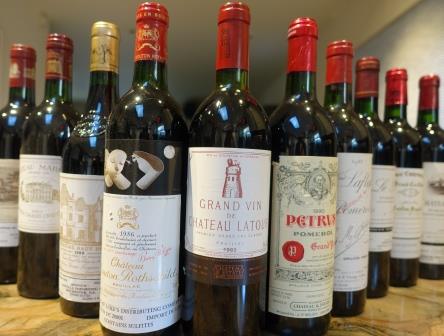 The culture of each region differs and because each area has its own unique style and character, as you might expect, the wines are quite different as well. The wines from each area taste, smell, feel and age differently. And that is just to get things started. So, as you can see, there are very important differences between wines from the Left Bank of Bordeaux, when compared with wines from the Right Bank of Bordeaux.

For more on Bordeaux, especially if you’re new to the wines of the region, you should read Bordeaux 101, Everything a Beginner needs to know about Bordeaux

But for now, let’s start with the wines, vineyards and chateau located in the Left Bank of Bordeaux.

The Medoc also includes the Haut Medoc, Moulis, Medoc and Listrac appellations. In total, there are 13,727 hectares planted with vines in the Medoc. Looking on a map, the Medoc starts just north of the city of Bordeaux and extends north, past St. Estephe to the Le Verdon port. However, many people also consider the Left Bank to include the wines of Pessac Leognan, which adds an additional 1,199 hectares under vine bring the total amount of hectares under vine to 14,926!

The Left Bank is where you will find all the First Growth Bordeaux, as well as all the other 1855 Classified Bordeaux wines of the Medoc including the Second Growths, Third Growths, Fourth Growths and Fifth Growths. In the Left Bank of Bordeaux, more than 200 chateaux can be found that are classified as Cru Bourgeois.

The Left Bank is also the home of all the Cru Bourgeois estates. While most of the Cru Bourgeois are located in Haut Medoc, others are situated all over the area from as far north as slightly above St. Estephe to below Margaux in the south as well. You can also find more than 40 chateaux classed as Artisan Crus, cooperatives and a countless array of small, unknown growers in the Left Bank of Bordeaux.

While all the wines from the Left Bank of Bordeaux are blends, in the Medoc, Cabernet Sauvignon is the dominant grape, followed by Merlot and Cabernet Franc. To a lesser degree, Petit Verdot, Malbec and small amounts of Carmenere are also planted in the Left Bank of Bordeaux. While the vast majority of wines produced in the Medoc are red Bordeaux wine, there are a few producers that also make white Bordeaux wine, most notably Chateau Margaux.

However, the best white Bordeaux wines are produced in the Pessac Leognan appellation. With the exception of Chateau Haut Brion, all the chateaux that earned their place in the 1855 Classification are located in the Medoc, which is the heart and soul of the Left Bank of Bordeaux.

Aside from the grapes and the styles of the wines found in the Left Bank of Bordeaux, when it comes to culture, the biggest difference between chateaux in the Right Bank, vs. chateaux in the Left Bank is the famous, 1855 Classification. The classification included 61 different chateaux, ranking them in order from First Growth, Second Growth, Third Growth, Fourth Growth and Fifth Growth.

When the classification of 1855 was initially created, it was not intended to be a fixed document that would continue for centuries. But that is exactly what happened.

The wines, vineyards and chateau from Right Bank of Bordeaux

While Pomerol and Saint Emilion together have roughly 6,369 hectares planted with grape vines, the entire area known as the Right Bank is much larger and more diverse, when you consider the important, satellite appellations. 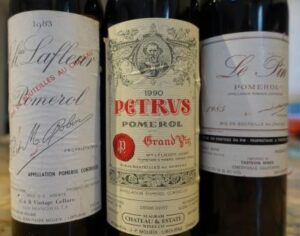 On this page, you can read about all the different soils and terroirs, found in the Right Bank. We cover the famous clay soils of Pomerol and the limestone based vineyards found in many of the best St. Emilion terroirs.

There are vintages that are definitely better for Right Bank Bordeaux wines than those in the Left Bank, it is not that simple. For example, there are years when Pomerol is much better than St. Emilion.

The Right Bank looks and feels differently than the Left Bank starting with the vineyards and the majority of the actual chateaux that are in the region. In the Left Bank, you find numerous large, if not massive estates and vineyards that can be over 100 hectares in size.

That is not the case with Right Bank vineyards, which are often closer to an average of 5 hectares in size. There are a few, stunning, massive, architecturally, stunning chateau in the Right Bank, but generally speaking, you find more family homes and smaller, classic chateaux here.