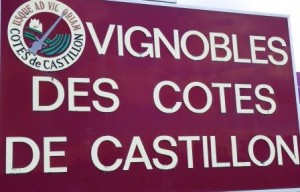 The finest terroir of Cotes de Castillon is located on the plateau with large deposits of limestone and clay soils. Further down the slopes, you find more clay, gravel, and sand.

On the plateau, the soils are similar to that which you find in some of the best St. Emilion terroirs. The least desirable terroir is located close to the Dordogne river, with its alluvial soils.

Small plantings of Malbec, Petit Verdot and Carmenere can be found. The vines at the best estates are old. There are numerous vineyards with old vines that average 50 years of age in the Cotes de Castillon appellation.

Gerard Perse of Chateau Pavie, Stephan von Neipperg of Canon La Gaffeliere, and Juliette Becot of Beau-Sejour Becot are just three of the well-known growers from St. Emilion to recognize the potential of the soils found in Cotes de Castillon. Growers in Cotes de Castillon generally speaking pick up to a week later than they do in St. Emilion.

Cotes de Castillon is a new and continuously, changing designation. Before it became an official AOC designated appellation in 1989, the region was known as Bordeaux Superieur Cotes de Castillon. Prior to that, the wines were sold under the much simpler banner as near St. Emilion.

There are numerous other strong producers making outstanding wine in Cotes de Castillon today. The appellation is making better wines all the time! Part of the reason the wines are so good here, is the commitment to environmentally sound, vineyard management. In Cotes de Castillon, you find one of the highest concentrations of growers using either Organic, Biodynamic or self-sustaining, vineyard management farming techniques.

Here is a tip for you when visiting the Cotes de Castillon appellation, if you are spending the day and do not want to drive all the way back to Saint Emilion, for lunch or dinner, stop in at Le Comptoir de Genes. The restaurant is owned by the founder of Lathwaithe wines, located in London, England. Le Comptoir de Genes is famous in the appellation because it only sells wines made in chateaux located in the Cotes de Castillon appellation.