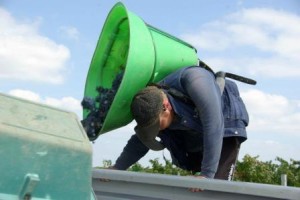 Learn everything about Cotes de Bordeaux wine, with a history of the Cotes de Bordeaux appellation, a look at the style and character of the wines, with detailed profiles on all the top wines, wineries, vineyards, and winemakers, with wine tasting notes, histories, best vintages and buying guides for all the tops wines.

Things started coming together by 2003, and in 2009, the new Cotes de Bordeaux appellation was created with the purpose of helping to promote the wines from the previously separate appellations as a united group. The specific appellations were chosen because they shared similar terroirs of gravel, clay, and limestone soils.

Another consideration was the fact that the vast majority of the wines produced in those soils were dominated by the Merlot grape. One problem or virtue, (Depending on your point of view) found in the new appellation is the ability for producers from any terroir in the now, very large Cotes de Bordeaux appellation to incorporate grapes from any of the previously, separate appellations; Cotes de Castillon, Cotes de Blaye, Cotes de Bordeaux, and Cotes de Francs into their wine.

Merlot and Cabernet Franc occupy the largest portions of the area’s vineyards. But Cabernet Sauvignon along with Malbec and Petit Verdot are also planted in smaller amounts. While the majority of Cotes de Bordeaux is devoted to the production of red Bordeaux wine at 97% of the region’s production, white wine is also produced here.