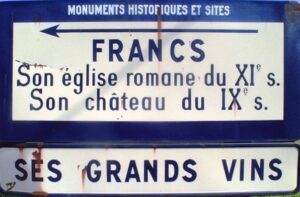 Learn everything about Cotes de Francs wine, with a history of the Cotes de Francs appellation, a look at the style and character of the wines, with detailed profiles on all the best wines, wineries, vineyards, and winemakers, with wine tasting notes, best vintages, histories and buying guides for all the best wines and vintages. For other, important Bordeaux value wine regions: Bordeaux Value Wine Appellation Guide

If you want to read about other Bordeaux wine producers in different Bordeaux appellations or have questions about everything Bordeaux, All About Bordeaux Wine Guide

Close to 50 producers are currently making wine in the Cotes de Francs appellation today. There is 1 cooperative.

You’d think that with an appellation that small the terroir would be mostly homogeneous. That is relatively true, however, one property, Chateau Le Puy did not agree.

Chateau Le Puy thought their terroir was so distinctive, they petitioned the INAO saying that they deserved their own appellation. Their request was denied. Chateau Le Puy, however, earned recognition for being the first Demeter-certified, biodynamic vineyard in the appellation.

The region of Cotes de Francs owes its name to the commune of Francs, which is the most important area of the appellation. The city of Francs took its name after the first King of the Francs victory over the Visigoths.

The terroir of Cotes de Francs consists of clay and limestone soil, with a limestone plateau. It’s important to note there are vineyards with slopes and elevations, similar to what you can find in St. Emilion.

The region is mostly planted to Merlot. However, vines are also planted to the other major, red wine, Bordeaux varieties as well. Cabernet Sauvignon, Cabernet Franc, Malbec, and Petit Verdot can also be found in the vineyards.

Some growers in the Cotes de Francs appellation also plant grapes for the production of white, Bordeaux wine, most notably, Semillon, Muscadelle, Sauvignon Blanc, and small plantings of Colombard.

While a minor amount of white wine is produced here, more than 95% of all wine from the Cotes de Francs is devoted to the production of red Bordeaux wine.

There are a few notable chateaus in the Cotes de Francs appellation that is owned by some of the most important families in the Right Bank of Bordeaux. The Thienpont family who own estates in Pomerol and St. Emilion own Chateau La Prade and Chateau Puygueraud.

To honor that purchase, a special wine was created, “Cuvee’ George,” which is produced from a blend that features up to 45% Malbec, which is one of the highest portions of Malbec used in Bordeaux today.

The Cotes de Francs appellation is a very good name to know, as the region produces quality, stylish, value Bordeaux wine with character at affordable prices, making its wines worth seeking out for savvy wine buyers.