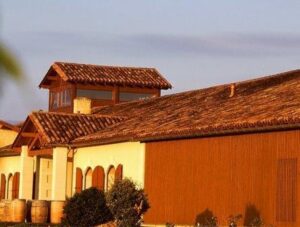 Learn everything about Clos Puy Arnaud Cotes de Castillon with wine tasting notes, wine, and food pairing tips, best vintages, a history of the property, information on the vineyards, and winemaking. If you want to read about other important, Bordeaux Chateaux: Links to all Bordeaux Wine Producer Profiles

Clos Puy Arnaud has a history that dates back to at least 1871 in the Cotes de Castillon region. However, the modern era for the estate begins in the year 2000 when Thierry Valette purchased the estate. If the Valette name sounds familiar, it should.

Thierry Valette is related to the Valette family that also owns Chateau Troplong Mondot and previously, Chateau Pavie. In fact, Thierry Valette was one of the owners of Chateau Pavie before the estate was sold to Gerard Perse. He also owned Chateau La Prade, until 2000, before taking over Clos Puy Arnaud.

Small amounts of those ancient Bordeaux grape varieties can already be found in the vineyard as well. Between 1% to 2% of the vines are planted to Castets and Mancin!

On average, the vines are close to 30 years of age. But they also have old vines that are more than 60 years of age. The vineyard has a terroir of limestone and clay soils.

However, because they are located on the top of the Castillon plateau and the limestone in their soil is unique. It is known as Asteries, which is the hardest type of limestone found in nature.

The Cotes de Bordeaux vineyard is managed exclusively by using 100% biodynamic farming techniques since 2008. They tried to become 100% biodynamic in 2004, but the difficult, wet, 2007 vintage set the property back. It took the next 3 vintages before they were certified by Biodyvin as organic. The estate is now also 100% biodynamic.

While Stephane Derenoncourt is no longer the consultant to the estate, it was Derenoncourt who sparked the idea to try new things, first by using first organic farming methods, and then biodynamic techniques to Thierry Valette.

To produce the wine of Clos Puy Arnaud, after the cold, pre-fermentation maceration is completed, the grapes are whole berry vinified in large, oak, wood tanks.

Malolactic fermentation takes place in a combination of vats and French oak barrels. The wines are then aged in 30% new, French oak barrels with a portion of the wine being aged in 500-liter vats and amphora for 12 to 14 months before bottling.

The estate produces two main wines, Clos Puy Arnaud and Les Ormeaux. In addition, there is also a second wine, Clos Puy Arnaud Cuvee Pervenche. The estate also makes a third wine, which is primarily sold to restaurants, La Cuvee Bistrot de Puy Arnaud, which made its debut in 2009. On average, more than 5,000 cases of wine are produced at Clos Puy Arnaud in each vintage.

In addition, the estate produces small amounts of wine made from 100% Cabernet Franc, Les Acacias, as well as a wine without the use of sulphur, aged entirely in Amphora, Clos Puy Arnaud Anada.

Clos Puy Arnaud is better with at least 2-3 years of aging in good vintages. Young vintages can be decanted for up to 1 hour, helping the wine soften to help develop the aromatic character.

Older vintages might need very little decanting, just enough to remove the sediment. Clos Puy Arnaud offers its best drinking and should reach peak maturity between 2-9 years of age after the vintage.