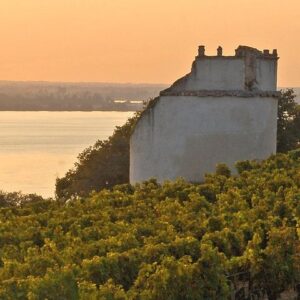 Learn everything about Cotes de Bourg Bordeaux wine, with a history of the Cotes de Bordeaux appellation, a look at the style and character of the wines, with detailed profiles on all the best wines, wineries, vineyards, and winemakers, with wine tasting notes, histories, best vintages and buying guides for all the top wines.

Cotes de Bourg is one of the oldest wine-producing regions in France. In fact, Cotes de Bourg has a history dating back to the days of the Ancient Romans. This was due to its strategic, geographical location in the Bourg, which is a port.

The port offered a natural situation to locate the wine trade, due to the ease in shipping. This is because the Cotes de Bourg provides access to both the Dordogne and Garonne rivers which empties into the Atlantic ocean. The sloping hills were perfect for the Romans to plant grapes, create wineries, provide sustenance for their legions of thirsty soldiers, and of course to ship their goods.

It’s easy to find ancient ruins from the region’s formative years when it was part of the vast Roman empire. Archaeological diggings and studies are still taking place. If you’re in the area, it’s worth a visit for history buffs.

The modern era for the Cotes de Bourg starts in 1936 when the appellation was created by the INAO. The region takes its name from the historic town of Bourg Sur Gironde. Cotes de Bourg is a massive region with 3,884 hectares under vine.

Close to 400 growers are active in producing wine in the Cotes de Bourg appellation. There are also 4 large cooperatives, which purchase close to 25% of the harvest from various growers each vintage.

In 2009, when the other Cotes appellations formed a new Bordeaux AOC, Cotes de Bordeaux, vintners in Cotes de Bourg declined to participate. In 2015, the region received bad news. After reports of almost 2 dozen people becoming ill, due to pesticide treatments in the region.

Starting in late 2015, after the harvest, and continuing into 2016, producers in Cotes de Bourg became the first appellation in Bordeaux to plant rows of hedges to help reduce future risks to people from pesticide spraying.

The Cotes de Bourg region is situated slightly north of Fronsac, south of Cotes de Bordeaux and not that far from the Cotes de Blaye appellation and it’s just northwest of the Bordeaux City Center.

The vineyards are connected to the quaint Bourg-sur-Gironde village. You can easily get to the Cotes de Bourg by car, or if you’re on the Left Bank, you can take the ferry which only takes about 20 minutes. The ferry departs from the Haut Medoc appellation, located just across the river, near Chateau Lamarque.

The region of Cotes de Bourg is littered with variable terroir. At its best, there are vineyards with clay and limestone soils.

However, much of the terroir is situated on sand, clay, gravel, and limestone soils. Cotes de Bourg is a cooler, marine climate terroir with close proximity to the where the Garonne and the Dordogne rivers intersects.

The cool climate and naturally moist conditions of the appellation can make it difficult for the grapes to achieve full ripeness, especially in difficult, cold, or rainy vintages.

For the red wine, Merlot is the key grape that takes up close to 65% of all the vines in the appellation, this is followed by Cabernet Franc, making those two grape varieties the two most important grapes in the region.

That makes the Cotes de Bourg the appellation with the highest concentration of Malbec in all of Bordeaux. If you think 10% of the region being devoted to Malbec is high, during the mid-1800s, close to 80% of Cotes de Bourg was planted to Malbec, before those vines were decimated by phylloxera.

Today there is a push to have it back to at least 10% of all plantings. They have been in partnership with a local nursery to develop 25 genetically diverse clonal selections since 2007 (working w Cahors & Argentina

In fact, there are producers in the region that make wines from using 100% Malbec in the blend!

For the white Bordeaux wine, which as we mentioned, takes up less than 2% of all the vines cultivated in the entire Cotes de Bourg region, Sauvignon Blanc, Muscadelle and Semillon are the dominant grapes planted here. But you also find lesser-known grapes such as; Colombard and Ugni Blanc planted in the vineyards as well. In fact, Cotes de Bourg has the largest percentage of Colombard planted in the entire Bordeaux region.

For more information on the Cotes de Bourg appellation www.cotes-de-bourg.com