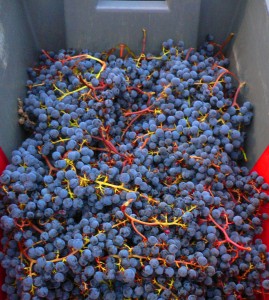 Originally the grape was first known as Auxerrois. In time that grape changed its name to Noir de Pressac, which was shortened for expediency to Pressac. Malbec was also known as Cot.

At first, the grape enjoyed popularity in Saint Emilion and in other Right Bank areas. In the 1700s, Sieur Malbek brought the grape from the Right Bank and planted it in a wide variety of terroirs in the Medoc. Due to the success and popularity of Pressac in the Left Bank of Bordeaux, it was renamed Malbec, in honor of Sieur Malbek.

However, Malbec had other issues in Bordeaux. The grape is naturally prone to high yields. Malbec grapes, due to the large size of its berries, it often had the propensity to produce dilute wines. The final fall from favor for Malbec in Bordeaux began with the famous frost of 1956.

After the frost, growers began replacing it with varieties better suited to the region like Cabernet Sauvignon and Merlot. Even today, Malbec continues declining in popularity in Bordeaux.

Malbec is the star grape of Argentina. It is thought that the grape was first brought to Argentina in the 1850s by Michel Pouget. The dark-colored, thin-skinned Malbec grape requires specific climatic conditions to fully ripen. In Mendoza, Malbec became a star!

The Malbec plantings in Lujan de Cuyo can produce just fabulous wines. Mendoza, has the perfect terroir for Malbec, with its dry climate, sunny weather and high elevations. Here, Malbec is to reach its best expression.

When ripe, it adds color, tannin and spicy characteristics to the wine, producing deep-colored, rich wines with freshness, balanced acidity, lush, round, supple textures and flavors of plum and blackberry.

Mendoza is of course not the only region in Argentina to produce Malbec. You also find plantings in cooler terroir that produce good, but less exuberant wines in regions like Patagonia and Rio Negro.

In France, Malbec produces a different expression than what is created in Argentina. This is important because French Malbec wine is quite different than the wines produced in South America from Malbec. In France, Malbec is often rustic and tannic, which is why in much of France, it’s only used as part of the blend.

But in Mendoza, Argentina, Malbec is the undisputed star of the show. Other areas in Argentina are also perfect for the grape including Salta, La Rioja, San Juan, and Catamarca. Malbec is now so popular, the grape has its own holiday, International Malbec Day, which is also known as World Malbec day is celebrated every April 17.

They will tell you Malbec is perfect with grilled or barbecued meats and sausage. Due to its rich, supple textures and spicy personality, match Malbec with beef, veal, chicken, pork, sausage, braised or stewed dishes, spicy cuisine, cured meats and dry cheeses.

Today, Malbec is only used as a minor part of blends in Bordeaux. Domaine de Chevalier has one of the larger portions of Malbec remaining in Bordeaux with close to 5% of their Pessac Leognan vineyards devoted to Malbec. In St. Emilion, Jean Faure is planted to 6% Malbec, Chateau Coutet St. Emilion is planted to 5% and some Malbec is even planted at Chateau Cheval Blanc!

Haut Bailly in Pessac Leognan and Gruaud Larose in St. Julien both have small plantings in their vineyards. Chateau Clerc Milon in Pauillac and Brane Cantenac in Margaux uses the varietal in their blend. In the Right Bank, the original name for the grape was Noir de Pressac. In fact, that is where Chateau de Pressac takes its name.

Today, not much Malbec is planted or used in the blends for Bordeaux wine. One of the larger amounts of plantings found was in Pomerol at Chateau LEnclos. Previously they devoted close to 3% of their vineyards to old vine Malbec. Those vines have since been removed.

However, that is topped by Chateau Clos Rene, with 10% of their vineyard devoted to Malbec! Some of the less prestigious Bordeaux appellations retain slightly larger plantings of the grape including the Entre Deux Mers region, Cotes de Blaye and Cotes de Bourg areas where some estates bottle Bordeaux wine produced from 100% Malbec.

Those Bordeaux chateaux could have the largest holdings of Malbec vines in the Bordeaux appellation. However, the wine with the highest portion of Malbec included in the blend is made by Nicolas Thienpont at his estate in the Cotes de Francs appellation. Chateau Puygueraud Cuvee George included 45% in the blend for the 2010 Bordeaux vintage. Chateau Bel-Air la Royere in the Cotes de Blaye appellation is another fan of the variety, as 45% of their vines are planted to Malbec.

While all those estates listed above produce Bordeaux made from 100% Malbec, in truth, Cahors remains the spiritual home for Malbec in France. AOC law dictates that no less than 70% of the variety be included in the blend. The grape continues to enjoy a long history in the region that could date back to the ancient Romans. It continued to be popular in the middle ages.

In Argentina, several quality producers are making wine from 100% Malbec with great success in the high altitudes and terroir of Argentina. In fact, the fruit reaches its best expression today in the Mendoza region of Argentina. There are numerous producers making outstanding wine in Mendoza.

The Clos de Los Siete project, spearheaded by Michel Rolland with Catherine Pere Verge who owns numerous estates in Pomerol produces Monteviejo and Helene Garcin with Vignobles Garcin and Poesia and the Bonnie family of Chateau Malartic Lagraviere, are just some of the better-known producers from Bordeaux working with Malbec in the Mendoza region of Argentina.

Malbec is also planted to different levels of success in Chile, the Napa Valley, and Paso Robles in California, Washington state, Oregon, Australia, New Zealand, South Africa, and Canada. In California, until Prohibition became law in the United States, Malbec was a popular grape that was often used to produce inexpensive jug wine.

By the time Prohibition was ended, very little Malbec remained planted in California. By the mid-1990s, Malbec began increasing in popularity. Plantings grew more than 700%, moving from about 1,000 acres to more than 7,000 acres today!