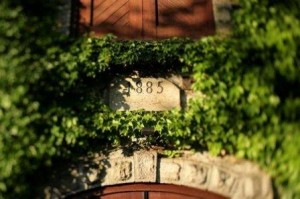 Beaulieu Vineyards, which took its name from the French translation of the term for beautiful place was founded in 1904 by Georges de Latour when he obtained 40 acres of vines cultivated in the late 1870’s. The first commercial endeavor on his own in California came when Latour bought the Ewer and Atkinson Winery. The company came with a vineyard first cultivated in 1880. Those purchases were augmented in 1907 when he obtained the Hastings vineyard, just east from Rutherford.

By the time of those purchases, Georges de Latour, who had moved from France to California, was no stranger to the wine industry as he was well known for selling phylloxera resistant root stock to growers in California. The vineyard started to come together in 1900, when Georges de Latour began purchasing vines in Rutherford. The initial wines released by Beaulieu Vineyards were made from purchased grapes, or wines that were produced by other growers, as their vineyards yet productive.

Georges de Latour was definitely a smart person who never passed on opportunities. His initial fortune came from selling phylloxera resistant root stock to vineyard owners. During Prohibition, he took the opportunity to purchase vineyards at reduced prices, as they were being abandoned. Beaulieu Vineyards managed to stay alive during Prohibition due to their production of wine for religious services. See, I told you he was clever. But his next move was his smartest yet.

Beaulieu Vineyards and Georges de Latour are two important names to know in the history of California wine. Beaulieu Vineyards was one of the first Napa Valley estates to begin popularizing the first use of modern, French wine making techniques. They also deserve credit for making what could be the first wine produced from mostly Cabernet Sauvignon, Beaulieu Vineyards Private Reserve. None of this could have been accomplished without the help of a true legend in the newly minted California wine industry, Andre Tchelistcheff.

Beaulieu Vineyards is one of the largest land owners in Napa Valley with more 1,100 acres in vines. Their best parcels are located in the Rutherford appellation. They have plantings of all the major Bordeaux varieties, Cabernet Sauvignon, Merlot, Cabernet Franc, Malbec and Petit Verdot. They also have vineyards with Chardonnay, Pinot Noir, Zinfandel and Petite Sirah. In addition, they maintain a vineyard that is used to experiment with a wide variety of different grape varieties including; Carignane, Petite Sirah and Valdiguie.

BV Vineyards wines are best served at 15.5 degrees Celsius, 60 degrees Fahrenheit. The cool, almost cellar temperature gives the wine more freshness and lift. Young vintages of their red wine can be decanted for 1-3 hours, depending on the character of the vintage. This allows the wine to soften and open its perfume. Older vintages might need very little decanting, just enough to remove the sediment.

The white wine of BV Vineyards is a perfect wine and food match for all types of seafood, sushi, sashimi, shellfish, chicken, veal, pork and cheese.