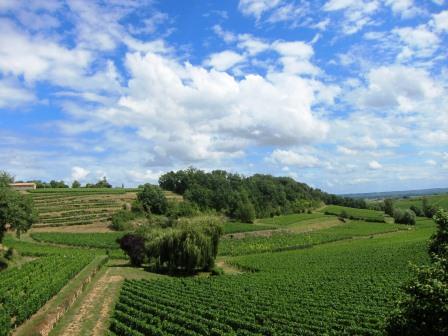 Learn everything about Fronsac Canon Fronsac Bordeaux wines with a history of the appellations, and a detailed look at all the best wines, vineyards, and producers in the region.

We’ll also cover the style and character of the wines, detailed profiles on all the best wines, vineyards, and chateau with wine tasting notes, histories, and wine with food pairing tips. For a look at other, important Bordeaux value wine regions: Bordeaux Value Wine Appellation Guide

Fronsac and Canon Fronsac are two of the strongest Bordeaux satellite appellations. The regions are located just west of Libourne and not far from Pomerol or Saint Emilion, and about 25 kilometers from Bordeaux. The wines are delicious, rich, ripe, and affordable.

They drink well young and offer some of the best value Bordeaux wines. The regions were not always inexpensive. Of the two appellations, Fronsac produces the finer, more elegant wine.

From the mid 18th century to the start of the 19th century, the top Right Bank estates in Fronsac and Canon Fronsac were better known and often sold for more money than many wines from Pomerol and St. Emilion. Wines from Fronsac and Canon Fronsac remained in high demand until the late 1800s. The devastating effect of phylloxera was the final straw, as both appellations were decimated.

Fronsac and Canon Fronsac enjoy a long and extensive history as vines were planted in both regions by the ancient Romans. In fact, in Fronsac, the Romans created the famous Gauls market, where the ancient Romans also constructed a massive altar.

Fronsac produces the best wines of the two appellations. The main reason for this is, more of the soils in the region are devoted to limestone with clay, which leads to richer wines, while you find more clay and sand in the soils of Canon Fronsac. Both regions are ideally situated with slopes overlooking the main water source of the area, the Dordogne river.

Interestingly, two of those communes, Fronsac and Saint Michel de Fronsac can place the appellation of either Fronsac or Canon Fronsac on their label. Out of all the appellations in Bordeaux, Fronsac has the largest percentage of foreign ownership. 13% of the vineyards are owned by Chinese investors.

American and Canadian owners are also present in the appellation. Much of the wine is sold to local residents and wine lovers in France, with close to 25% of the wines produced in the region going to export.

The terroir has clay and limestone soils that are not that different from what you find in Saint Emilion. Some of the best terroirs are located on the limestone bluffs with elevations close to 300 feet that overlook the Dordogne river. However, several of the vineyards in the region also have soils with sand, along with clay and limestone.

On the plateau, the terroir is mostly limestone. As you travel further down the slopes, you find clay with limestone and at the base, the soils are more sand with clay. Merlot and Cabernet Franc are the two most important grapes planted in the appellation. You can also find small amounts of Malbec and Cabernet Sauvignon planted in vineyards, but neither of those grape varieties plays an important role at any estates in the region.

Canon Fronsac is the smaller of the two appellations with about 299 hectares under vine. Close to 150 growers currently work in the appellations. As many as 50 growers prefer selling their harvest, or at least a portion of their harvest to local cooperatives. In Canon Fronsac, the average annual production is close to 140,000 cases of wine per vintage.

The terroir and soils are clay and limestone, which is often similar to what you find in St. Emilion. The best vineyards are situated on the limestone hillsides slopes that gently rise to 90 meters. As you travel further down the hillsides the soils have more clay and sand. Merlot is the dominant grape, followed by Cabernet Franc, similar to what you find in the best Right Bank vineyards. There are also vineyards with small amounts of Malbec and Cabernet Sauvignon.

For a look at some of the best wines in the Fronsac and Canon Fronsac appellations: La Dauphine, Fontenil, G Guinaudeau, Haut Carles, Moulin Haut Laroque, La Riviere, Vieille Cure, Vrai Canon Bouche and Villars are the top wines of these rapidly improving Bordeaux wine regions. But there are other chateau worth seeking out from this appellation as well.

For more on Fronsac www.vins-fronsac.com