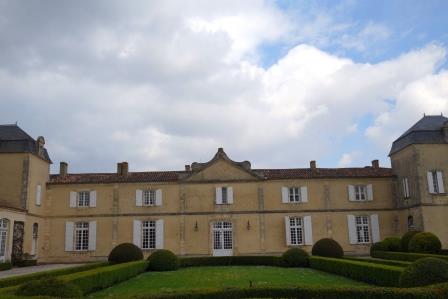 Learn everything about Chateau Calon Segur St. Estephe Third Growth with wine tasting notes and wine with food pairing tips. Learn the best vintages, a history of the property, information on the vineyards and winemaking. If you want to read about other Bordeaux wine producers: Links to all Bordeaux Wine Producer Profiles

Historic records show that Calon Segur was in existence as far back as 1147, when it was owned by Monseigneur de Calon. He was an important Bishop in the community. This makes Chateau Calon Segur a contender for the oldest property in Saint Estephe. Eventually the Medoc property came to be owned by Nicolas Alexandre de Segur. Which as you can see is where the name Calon Segur comes from.

After passing through generations, the estate became the property of the famous Marquis de Segur. de Segur is an important figure in Bordeaux history, not only for his ownership of numerous top Bordeaux estates of the day, (he also owned Lafite and Latour) but de Segur is credited with uttering the words that spawned the idea behind the heart shaped logo of Calon Segur.

Legend has it, de Segur is quoted as saying: “I make my wine at Lafite and Latour, but my heart is in Calon.” That famous saying lives forever on the label of Chateau Calon Segur, where the drawing of a heart is prominently featured on the logo.

Chateau Calon Segur was one of the original three Bordeaux vineyards in Saint Estephe. In 1825 Chateau Montrose was a forest, not yet cultivated with vines belonging to the massive Calon Segur estate.

In fact, Chateau Phelan Segur was also once part of the vast Segur estate. The holdings of the powerful Segur family were so large, they included not only what later became Chateau Lafite Rothschild, but also Chateau Latour and Chateau Mouton Rothschild!

The first part of the modern era for Chateau Calon Segur begins in 1894 when its Left Bank vineyards were purchased by Georges Gasqueton and Charles Hanappier. Hanappier was a large negociant at the time. The Gasqueton family managed the estate until 2012.

Most recently, the figurehead of Calon Segur was the charming, albeit eccentric, and occasionally stern, Madame Denise Gasqueton. Madame Gasqueton ran the estate while marching to the beat of her own drummer until she passed away at the age of 87 in late September, 2011.

The following year, July 2012, Chateau Calon Segur was sold for 170 million Euros, which at the current exchange rate, comes close to 215 million dollars. The buyer is the large French Insurance Company, Suravenir Insurance. Jean-Pierre Moueix, the owner of Petrus and the massive negociant company Duclot, took a minority stake in Chateau Calon Segur. 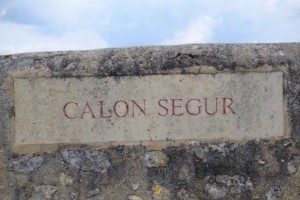 Since the new owners took over Calon Segur, they started a serious program of renovating the property with a focus on the wine making facilities. Following the trend to vinify on a parcel by parcel basis, the estate replaced their older vats with new, stainless steel tanks that vary in size and number to match all the various parcels in the large vineyard.

The new tanks accompany a completely new vat room as well with everything moving completely by gravity. The new tasting room features a skylight giving it a more spacious feel, along with much better light. The renovations were completed in 2016.

More than work in the cellars was needed here. Immediately after the sale was closed, the new owners began an extensive replanting of the Calon Segur vineyard. There are numerous reasons the new owners chose to do this. They needed to increase the level of vine density and add more Cabernet Sauvignon in the vineyard.

The extensive renovation of Chateau Calon Segur is expected to cost at least 20 Million Euros. One of the other changes that took place when the new owners took control was bringing in Vincent Millet as the Technical Director.

In September 2020, the owners of Calon Segur added to their portfolio of vineyards with the purchase of 3 properties they purchased from the owners of Chateau Latour: Chateau Vray Croix de Gay, Pomerol, Chateau Siaurac, which is located in the Lalande de Pomerol appellation and Chateau Le Prieure in St. Emilion.

The large, 55 hectare St. Estephe Bordeaux vineyard of Calon Segur is planted to 53% Cabernet Sauvignon 38% Merlot 7% Cabernet Franc and 2% Petit Verdot. This shows a slight change, with a small reduction in the Cabernet Sauvignon and an increase in the Merlot.

The goal of the new owners of Calon Segur is to decrease the percentage of the Merlot, reducing it to only 20% of the vineyard and add more Cabernet Sauvignon vines in their place. Historically speaking, this is similar to how the vineyard was planted in previous generations.

The vine density varies, but it is not as full as most vineyards in the Medoc. In fact as many as 20 hectares were in such poor condition when the property as sold in 2012, they were planted to as low as 5,900 vines per hectare.

Those parcels are used for the Grand Vin. Much of the vineyard has a view of the Gironde, which adds to their micro-climate.

The vineyard is just north of the small village of Saint Estephe. While there are slopes found here, they are slight, ranging from 2 meters up to 23 meters. The peak elevation is close to the small chapel on the property, just east of the chateau.

The vineyard is divided into 3 large blocks, each of which has small hills and slopes. The smallest block, is due south of the 2 main vineyards. The 3 main blocks can be further divided into 60 different parcels. The best terroir is placed to the east, close to the chapel, with views of the Gironde.

The terroir of Calon Segur is a blend of gravel, rocks, clay, sand and limestone soils on the surface with gravel that can go as deep as 5 meters. Underneath, you find marl, clay and limestone. The clay is unique to Calon Segur as here you find a mix of blue clay, yellow clay and dark black clay. On average, the vines are 25 years of age. However, you can expect that to change as the vineyard ages.

The young age is due to the replanting program. However, they have old vines, placed close to the small chapel, which range from 45-60 years of age.

The vineyard of Chateau Calon Segur remains almost exactly the same as it did at the time of the 1855 Classification. While the vineyard is large at 55 hectares, most of the time, only 50 hectares of vines are planted. This allows time for the soils to remain fallow and become revitalized. 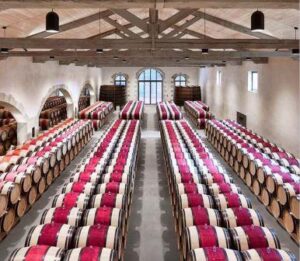 Because the vineyard is situated in the northernmost part of the St. Estephe appellation, quite often, Chateau Calon Segur can have one of the coolest terroirs in the northern Medoc. Thus, they can be one of the last properties to finish harvesting, depending on the vintage.

Chateau Calon Segur is also one of the most difficult estates to find as there are no signs to lead the way. Trust me on this one, as I got lost the first few times I visited the property. The previous owner was not fond of visitors.

Making the Wine of Calon Segur

To produce the wine of Chateau Calon Segur today, vinification takes place in a gleaming new, facility that was completed in 2016, after a multi year, top to bottom renovation. Now, the fermentation takes place in 70 conical shaped, stainless steel tanks that range in size from 25 hectoliters to 120 hectoliters allowing for very precise, parcel by parcel vinification.

Prior to the new owners taking over the estate in 2012, the wine was aged in up to 50% new, French oak barrels for between 12 to 18 months before bottling.

Today, the best vintages are now aged in 90% to 100% new, French oak barrels for up to 20 months in an effort to soften the wine while also adding more layers of more richness to the texture. Previously, the percentage of new oak was closer to 60%, on average.

There is also a third wine, which is sold under 2 names, La Chapelle de Calon, and St. Estephe de Calon Segur, which is produced from vines that for the most part comes from their specific plot with more limestone in the soil.

The owners control another estate, a cru bourgeois property, which is also located in the St. Estephe appellation, Chateau Capbern Gasqueton, which has been renamed, Chateau Capbern.

Chateau Calon Segur is a powerful, tannic wine that in the best vintages requires more than a decade, and often 2 decades to soften and come together. While there are numerous older vintages that are sublime, the best wine produced in the history of the estate is probably the 2016! It is absolutely stunning in every sense of the word.

The style of Calon Segur wine until the new owners took over were masculine, sturdy, tannic, structured and traditional in its textures with a lean to a brawny of St. Estephe wine that often took more than decade or two, or longer to become civilized.

Starting with the 2014 vintage, the wines have taken on a new style. Under the direction of Laurent Dufau, the wines of Calon Segur and Capbern Gasqueton are softer, lusher, riper, more forward and refined in their approach with a better purity of fruit that in my view, are dramatically better.

Chateau Calon Segur needs time before it begins to show its true character. Calon Segur needs at least 10-15 years of aging in good vintages until it is ready to be enjoyed. Young vintages can be decanted for 2-4 hours, or more. This allows the wine to soften and open its perfume.

Older vintages might need very little decanting, just enough to remove the sediment. Chateau Calon Segur offers its best drinking and should reach peak maturity between 15-50 years of age after the vintage.