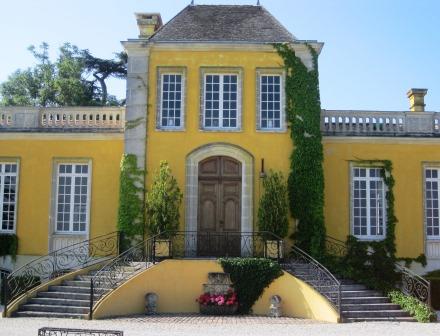 Learn everything about Chateau Lafon Rochet St. Estephe Fourth Growth, with wine tasting notes and wine with food pairing tips. Learn about the best vintages, the history of the property, information on the vineyards, and winemaking. If you want to read about other Bordeaux wine producers: Links to all Bordeaux Wine Producer Profiles

What we know of today as Chateau Lafon Rochet in St. Estephe, dates back to the middle of the 17th century. The estate was founded In 1650, when Antoinette de Guillemotte, brought the land of Rochette as her dowry to her husband, Pierre de Lafon.

Shortly after they were married, following the custom of the day, they renamed the estate, using their last name, coupled with the previous name of the property, Chateau Rochet, and Chateau Lafon Rochet was born.

While many Bordeaux vineyards were confiscated during the French Revolution, that did not happen to Lafon Rochet. In fact, the Left Bank estate remained the property of the same family for more than two centuries.

Everything changed at Chateau Lafon Rochet in 1959 when Guy Tesseron purchased the estate. The property needed extensive work as it had fallen into a dilapidated state. The Tesseron family, under the direction of Guy Tesseron completely renovated Lafon Rochet from top to bottom.

This was something that had to be done as most of the original buildings were in such bad shape, they could no longer be used. The vineyard also needed extensive replanting. At the time of the purchase, the vineyard was only 17 hectares.

Through replanting and subsequent purchases, the estate has more than doubled in size since the Tesseron family took control of the property. That marked the start of the modern era for Chateau Lafon Rochet.

Tesseron had his work cut out for him at his Medoc property in the 1960s. The vineyards were as we mentioned in poor shape.

Much of the land needed to be replanted in part, but the grape varieties that already existed in the vineyards were planted in the wrong types of soils for their varietal. The Merlot was in the gravel and the Cabernets were in the clay.

That is still slowly being corrected today, although currently, almost everything is as it should be. This explains why the wines are so much better today.

Even the Chateau had to be replaced! In fact, Chateau Lafon Rochet is the only 1855 Classified growth with a new chateau that was constructed in the 20th century! 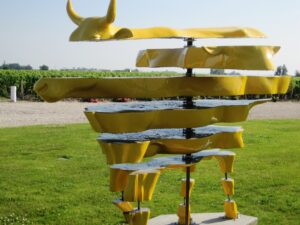 In 1999, after being in the Bordeaux wine trade for more than four decades, Michel Tesseron took over the property and decided to change the classic style of the 18th-century design that was created for the chateau. Michel Tesseron did it by adding some color to Lafon Rochet in 2000.

As you can see, the chateau of Lafon Rochet is now a bright, sunny, bold, Mediterranean shade of yellow. It’s an artistic statement according to Michel Tesseron.

At the same time, the labels of Chateau Lafon Rochet were also changed to showcase the new, artistic, sun-filled, yellow theme.

It was under the management of Basile Tesseron that Chateau Lafon Rochet was ushered into the modern age. Basile Tesseron started at the estate in 2007, after training with negociants. He speaks perfect English, with a subtle British accent. That is something he picked up while living in England.

Things changed in September 2021 when Chateau Lafon Rochet was sold to Jacky Lorenzetti. Jacky Lorenzetti is an experienced vineyard owner as he already owns neighboring Chateau Lilian Ladouys, also located in Saint Estephe as well as Chateau Pedesclaux in Pauillac and Chateau dIssan in Margaux. Emmanuelle Cruse will take over as the director of the estate.

On average, the vines are kept at 37 years of age. However, the estate has old vines. Their oldest parcels have Merlot vines that were planted all the way back in 1938.

As we mentioned previously, the vineyard of Lafon Rochet is in one large block that can be subdivided into 40 separate parcels. They have slopes and hills that rise to 26 meters in elevation.

The vineyard of Lafon Rochet is in almost one single, large parcel, which is unusual for the region, although the vineyard does make a few odd twists, turns, and angles to remain in its single block of vines.

They have 38 hectares under vine. The vineyard was slightly reduced in size as they sold 3 hectares of vines. Their terroir is mostly gravel, clay, sand, limestone, and marl soils. Their best parcels are located on the west side of the estate, where find a mix of deep gravel and clay.

Part of what makes their terroir unique is that some of the clay in their vineyards is the same type of hard, blue clay found in Pomerol at Petrus.

Chateau Lafon Rochet has good neighbors. They are ideally placed not far from Chateau Cos dEstournel, Chateau Cos Labory, and Chateau Lafite Rothschild in Pauillac. This places much of their vines in the southern part of the Saint Estephe appellation.

Lafon Rochet continues to experiment with various farming techniques. Over time they have tried using organic farming on at least 10% of their vineyards. But the results were not what they were hoping for.

In 2015, Lafon Rochet completed a renovation and renovation of their cellars and vat rooms. This was a much-needed improvement, as the cellars were more than 35 years old.

The biggest change was to bring in all-new, gleaming, stainless steel tanks and concrete vats. The design and concrete vats were created by the same architect that designed the new cellars at Chateau Cheval Blanc, Christian de Portzamparc.

The new cement tanks at Lafon Rochet are stunningly beautiful to see, as well as being incredibly smooth to touch.

70% of the vinification now takes place in their new, concrete tanks, which is where the Cabernet Sauvignon is fermented. The remainder of the grape varieties, Merlot, Cabernet Franc, and Petit Verdot are vinified in stainless steel.

The wine of Chateau Lafon Rochet is then aged in 55% new, French oak barrels for 9 months before the wine is moved to one-year-old barrels, where it remains for an additional 9 months of aging before bottling.

In 2012, in a continuing effort to make even better wine, Lafon Rochet made two significant moves.

First, they hired the well-known consultant Jean-Claude Berrouet, who is best for his work at Petrus to help with the winemaking. They also used optical sorting technology for the first time.

Speaking of first’s, Lafon Rochet became the first Bordeaux chateau to take part in the Google Street View Program, which allows online viewers the chance to see the entire estate in 3D. However, that is not the only first for the estate.

At Chateau Lafon Rochet, they maintain a unique practice during the late winter months that combines wine with health. From November until March, the owner, Michel Tesseron, joins members of his team twice a week for 20 minutes of Tai Chi in their cellars.

Chateau Lafon Rochet can be enjoyed somewhat early. However, the wine is often better with at least a few years of bottle age. Of course, that can vary slightly, depending on the vintage.

Chateau Lafon Rochet is usually best enjoyed in the first 10-25 years of life. Young vintages can be decanted for 1-3 hours. This allows the wine to soften and open its perfume. Older vintages might need very little decanting, just enough to remove the sediment.