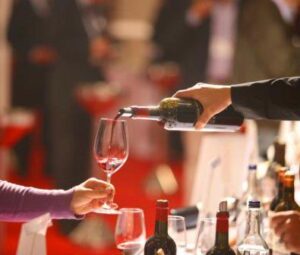 It’s that time once again for the UGCB as the 2015 UGC tour is about to begin. The UGC, (The Union of Grand Crus Bordeaux) is the best wine trade group in the world with about 135 chateaux active members from every appellation in Bordeaux. Fortunately for American consumers, the first tour of the year always kicks off in North America every January. It’s good for the Bordelais as well as this provides with the excuse, or chance, depending on their point of view to escape the bitter cold, snowy, January weather Bordeaux and enjoy some warmth and sunshine, depending on where they visit.

After Olivier Bernard of Domaine de Chevalier from Pessac Leognan was voted in as the President of the UGCB, the group has continued expanding their touring schedule covering more cities over a longer period of time. You can really see this when you look over the 2015 UGC schedule of tastings. While this can be a pain for many owners and directors, it’s great for consumers and wine lovers as they have the chance to taste more than 100 different wines from many of the top chateau in Bordeaux from the Left Bank, The Right Bank, Pessac Leognan and Sauternes!

For a look at the 2012 Bordeaux wines tasted in barrel:

Keep in mind that some of these events are only open to members of the trade. Other 2015 UGC Bordeaux tastings are open to the general public.

January 21 Orlando, Florida – This is not a 2015 UGC sponsored event. So all the Bordeaux chateaux will not be present. But many of the top estates will be in Orlando showing their 2012 vintage. Tickets are available at ABC Wines.

This is the list of cities the UGC will visit in the United States and Canada in January, 2014.

January 23 Toronto Canada – Sponsored by LCBO, the tasting is open to the public. Tickets are available from : LCBO

January 24 St. Johns Newfoundland – The tasting is being held at the Sheraton Hotel. Tickets are available from Newfoundland Labrador Liquor Corporation.

January 26 New York – There are two different 2015 UGC Bordeaux tastings taking place. During the day, there is a trade only event at Cipriani on 42nd Street. Later that night, Le Du’s Wines is hosting a small tasting with a limited amount of chateau participating. Tickets are available from Le Du’s Wines.

January 28 Chicago – There is a trade tasting that is taking place in the early afternoon, which is followed by a tasting for the general public of 2012 Bordeaux. Tickets are available from Binnys. Both events are being held at the Drake Hotel.

January 29 has two tastings taking place in Denver and in Las Vegas. Of course each of these 2012 Bordeaux tastings will feature different chateaux. In Denver, tickets are available from Applejack.

January 30 San Francisco – The tasting at the Palace Hotel is hosted by K & L. For tickets and information K & L Wine Merchants

January 31 Los Angeles- The Museum of Flying at Santa Monica Airport – Tickets for the 2015 UGC Bordeaux wine tasting in Los Angeles are available from Wallys You can also call 310-475-0606. Tickets are $69 per person in advance, $100 at the door. Something else you should know about the Wallys 2015 UGC Bordeaux wine tasting, 100% of the net proceeds from the tasting will benefit Food on Foot, a nonprofit organization providing the poor and homeless of Los Angeles with meals, clothing and assistance in the transition to employment and life off the streets.

Not all members of the UGC will attend every event. This is a list of the 2012 Bordeaux wines being poured by the various Chateaux for the 2015 UGC Bordeaux tastings: