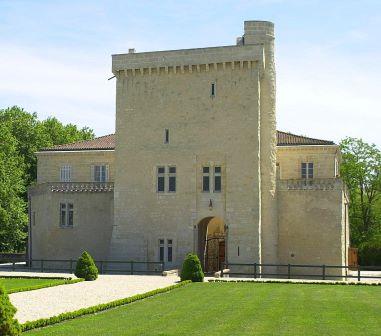 Learn everything about Chateau La Tour Carnet Haut Medoc, Fourth Growth, producer with wine tasting notes and wine with food pairing tips. Learn the best vintages, a history of the property and information on the vineyards and winemaking. If you want to read about other important, Bordeaux Chateaux: Links to all Bordeaux Wine Producer Profiles

Chateau La Tour Carnet, owned by Bernard Magrez, is one of the oldest Bordeaux wine producers that has remained continually active in the entire Bordeaux appellation. The chateau is also one of the oldest structures in the region.

In fact, some parts of the building, specifically the round tower, date all the way back to the 11th Century. At the time, it was a fortress that was inhabited by the English as early as the 12th Century. What we know of as Chateau La Tour Carnet today, was an important fort that was used by the military as an outpost in Bordeaux.

The chateau of La Tour Carnet is one of the few remaining Bordeaux estates to have a working moat and drawbridge. Originally, the property went under the name of Chateau de St. Laurent.

The land eventually fell to French rule. After centuries of war, the ruined property passed through the hands of a succession of owners, before it was obtained by Charles de Leutken. Chateau La Tour Carnet remained with the Leutken family for generations.

The current owner of La Tour Carnet is Bernard Magrez. Magrez is the proprietor of a number of other Bordeaux estates, most notably Chateau Pape Clement in Pessac Leognan. Bernard Magrez bought the estate from the Pelegrin family in 1999.

Additionally, Bernard Magrez owns numerous other Bordeaux estates including Fombrauge in St. Emilion. One of the first things Bernard Magrez did after taking over Chateau La Tour Carnet was to increase the size of the vineyards.

When the property was first taken over by Bernard Magrez, the estate had only 44 hectares of vines. By 2018, their holdings had increased to 190 hectares.

Chateau La Tour Carnet is now one of the largest vineyards in Bordeaux and they are also one of the top producers in the Haut Medoc appellation area today.

The massive 190 hectare Left Bank vineyard of La Tour Carnet is the largest of all of the 1855 Classified Growths. The vines are well placed in the Haut Medoc appellation.

They are not far from some of the top vineyards in the St. Julien appellation like Chateau Lagrange. The vineyard is planted to 56% Merlot, 39% Cabernet Sauvignon, 4% Cabernet Franc and 1% Petit Verdot, marking an increase in the Merlot.

The percentage of Merlot planted in the vineyard has increased since it was purchased by Bernard Magrez. The majority of the vines are in one massive parcel, which is unusual for the region.

The terroir of La Tour Carnet is gravel, clay, and limestone soils with gentle, rolling slopes. They are inland, between the 2 main roads, the D2 and the D1. The vines are on average 30 years of age.

The vineyard is planted to a vine density that ranges from 8,000 to 10,000 vines per hectare. The newer plantings are down at the higher levels of vine density. The humongous vineyard is divided into a whopping 304 separate parcels with a range of terroirs, as the vineyards are spread among 6 divergent communes.

To produce the wine of La Tour Carnet, the grapes are whole berry fermented, after being cooled to 8 degrees Celsius in a cryogenic tunnel by using liquid Azote, which is a type of nitrogen gas.

The remaining 10-15% of the wine is aged in large, clay, amphora. The aging period is on average about 18 months before bottling. 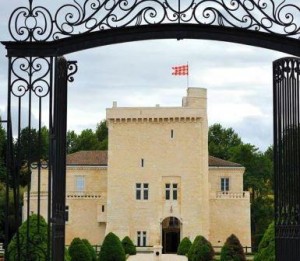 Chateau La Tour Carnet added a dry, white Bordeaux wine to their portfolio in 2008. The grapes come from a small, 2-hectare parcel of vines. For the white wine, the vines are planted to 33% Sauvignon Blanc, 33% Semillon, 29% Sauvignon Gris and 5% Muscadelle.

However, the actual blend for the white wine can vary widely. The vines are planted in a cooler terroir with more limestone in the soils. As you can see, Bernard Magrez is a fan of Sauvignon Gris. In fact, Bernard Magrez also includes the grape as a large part of their blend for use in Chateau Pape Clement Blanc as well.

Because white wine grapes are not allowed by law in the appellation, the wine is sold as a generic AOC Bordeaux Blanc. On average, close to 75,000 cases of Chateau La Tour Carnet are produced each vintage.

Bernard Magrez also produces a special Cuvee from 100% Merlot from the vineyards of La Tour Carnet called Servitude Volontaire. The vines are located in the northeast portion of the Medoc, close to St. Seurin. The tiny, 500 case production of Servitude Volontaire is sold exclusively at retail shops owned by Magrez in Bordeaux as well as in Paris.

Servitude Volontaire made its debut in 2003. Starting with the 2010 vintage, Chateau La Tour Carnet began taking anti-counterfeiting measures using the Intaglio method of bottle etching coupled with Spottag, which adds an invisible ink on the labels.

There is a second wine, Les Douves de Carnet. The estate also produces wine from vines located outside the Haut Medoc appellation, La Tour Carnet Cuvee La Bravoure, which is sold as a Medoc Bordeaux wine. As you should expect from the size of the vineyard, almost 75,000 cases of wine, (900,000 bottles) are produced here each year!

Chateau La Tour Carnet needs time before it can be enjoyed. Young vintages can be decanted for an average of 1 -2 hours or so. This allows the wine to soften and open its perfume. Older vintages might need very little decanting, just enough to remove the sediment.

Chateau La Tour Carnet is a perfect match with Asian dishes, hearty fish courses like tuna, mushrooms, and pasta as well as a wide variety of hard and soft cheeses.

La Tour Carnet maintains one of the strongest research programs in Bordeaux, focusing on the potential, future problems Bordeaux will face, due to continuing climate change.

Much of this is due to the fear that eventually it will become too warm for the Merlot grape. Experiments are taking place with various different grape varieties and clones to protect the heritage and quality of Bordeaux wine.