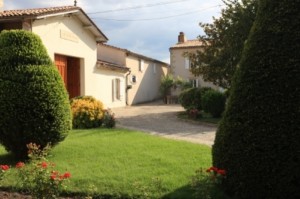 Learn everything about Chateau Doisy Daene Sauternes, Deuxiemes Crus with wine tasting notes and wine with food pairing tips. Learn the best vintages, a history of the property, information on the vineyards and winemaking. If you want to read about other important, Bordeaux Chateaux: Links to all Bordeaux Wine Producer Profiles

The name Doisy-Daene was inspired by an owner in the late 1800s, Jacques Emmanuel Daëne. Daene took the vineyard’s name of Doisy and used his name to come up with what we know of today as Chateau, Doisy Daene.

In 1875, J.J.E. Daene’s three sons inherited their estate. Later that same year, they sold a portion of Doisy Daene to the Dubroca Brothers. Starting in 1878, Doisy Daene was sold again, again and again.

Finally, in 1924, Georges Dubourdieu purchased Doisy Daene from Deban’s heirs. At the time, the property had only 4 hectares under vine. Slowly but surely, the family continued acquiring more land and increasing the size of the vineyard.

Pierre Dubourdieu took over management of the estate in 1949. One of his initial decisions was introducing the first dry white wine in the appellation, Cuvée Saint Martin. At the time, their new dry white Bordeaux wine was a massive 70% of the estates total production!

In 2000, the noted wine consultant, Denis Dubourdieu took over managing all of the family estates from his father, Pierre Dubourdieu who was now retired. Denis Dubourdieu was perfect for the job. He was a respected professor at Bordeaux University and was already consulting numerous Bordeaux estates in the Medoc, the Right Bank, and of course Sauternes on the production of their red, dry white, and sweet wines.

That is because, in 2012, the entire vineyard of Doisy Dubroca was ripped up. It was not expected that replanting will take place before 2016, to allow the soils to recover. In 2017, Chateau Doisy Daene completed the construction of its new, modernized, tasting room.

Aside from being the owner of several vineyards, Denis Dubourdieu was even better known for being a Professor of Oenology, tireless researcher, scientist, and a consultant for red and white Bordeaux at a myriad of Chateaux.

While Bordeaux is of course better known for red wine, it was white Bordeaux wine that really captured his focus. In fact, consumers of dry and sweet white Bordeaux wines have much to be thankful for, due to the numerous contributions of Denis Dubourdieu.

Dubourdieu was responsible for many of the changes in the vineyards and the cellars that have led to an explosion in quality for white Bordeaux wine, including using less new oak, during the vinification and aging process as well as harvesting dates and soil studies.

For the red wines, Denis Dubourdieu was not a big fan of picking grapes that some growers and other consultants considered fully ripe, or overripe. Denis Dubourdieu was more interested in producing wines with more freshness and vibrancy. He did not favor the trend to produce darker, more extracted wines that have become more popular in Bordeaux today.

2016 was a year of honors and sadness for the Dubourdieu family. In 2016, Denis Dubourdieu was awarded the distinguished Legion d’Honneur from the French government.

He was also given the award for the Man of the Year from Decanter magazine. Denis Dubourdieu passed away July 25 after a long bout with cancer at the age of 67. His passing left a large hole in Bordeaux. His two sons, Jean Jacques Dubourdieu and Fabrice Dubourdieu have taken over managing all of the Dubourdieu family estates.

The 18.2 hectare Chateau Doisy Daene is planted to 86% Semillon and 14% Sauvignon Blanc. Although there is a small section of vines planted to Muscadelle as well. This marks a change in the vineyard, as today, you find a higher percentage of Semillon planted.

Situated quite close to Chateau Climens, in Barsac, the vineyard has a terroir that consists of red sand, clay and limestone soils. The vines are planted to a density of 7,000 vines per hectare. On average, the vines are maintained at 35 years of age.

Aside from their sweet, white Bordeaux wine, which is their mainstay, Chateau Doisy Daene produces two additional wines. They make a dry white wine from 100% Sauvignon Blanc, which is sold as a Bordeaux blanc. This is denoted by the term Grand Vin Sec, which appears on the label for Doisy Daene Grand Vin Sec. 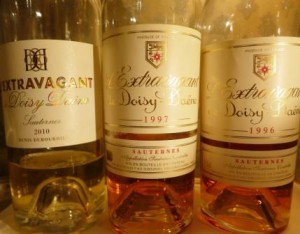 What separates this wine from their regular Cuvee, and frankly all other Sauternes wines are the extremely high sugar levels. l’Extravagance de Doisy Daene can be close to twice as high in sugar levels as their regular wine. It can also be lower in alcohol.

l’Extravagance de Doisy Daene is priced to compete with Chateau d’Yquem. Not much is made, making it one of the most difficult Sauternes to find, as well as one of the most expensive. The wine is only sold in half bottles. Each 375 ml bottle of this wine is packaged in its own wooden case and the capsules are topped with wax.

Chateau Doisy Daene can be enjoyed on the young side with no decanting. In fact, it is delicious and quite a treat young, even on release! However, like all great wines, Chateau Doisy Daene is much better with age and does not reach full maturity until it’s between 12-30 of age, or in some years, perhaps even longer in the best vintages!

That is when the magic happens! But that is unrealistic for 99% of the world’s wine drinkers. So, enjoy it on any special occasion that calls for it.

Of course, the wine is sweet, but there is so much, incredible, racy acidity, the wine always feels fresh, and never cloying, which makes it quite fun to enjoy young. With Chateau Doisy Daene and frankly, all Sauternes, the temperature is more important than decanting.

The wine will naturally warm in the glass, while it develops more aromatic complexities and fleshes out. Chateau Doisy Daene can be served with seafood dishes, especially shellfish, lobster, crab, and oysters on the half shell. Foie gras is a perfect pairing with its natural sweet, salty and savory characteristics.

Chateau Doisy Daene can also be paired with roasted chicken, veal, and pork dishes that are either spicy or prepared with a touch of sweetness. Spicy Asian cuisine, raw fish, like sushi or sashimi, and cheese, both hard and soft also make great pairings with Chateau Doisy Daene.

Denis Dubourdieu also owns Clos Floridene in the Graves appellation, not far from Pessac Leognan and Chateau Reynon, which is a Premieres Cotes de Bordeaux.

Aside from his work in Bordeaux, Denis Dubourdieu is involved with several projects in different regions all over the world. One of his most interesting ventures is in the Stellenbosch region of South Africa with 4 G Wines in a partnership with Girogio Dalla Cia.