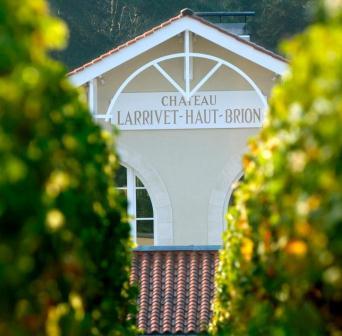 Learn everything about Chateau Larrivet HautBrion Pessac Leognan with wine tasting notes and wine with food pairing tips. Learn all the best vintages, a history of the property, and information on the vineyards and winemaking. If you want to read about other important, Bordeaux Chateaux: Links to all Bordeaux Wine Producer Profiles

What we know of today as Chateau Larrivet Haut Brion came into being with the original name of La Rivette. This took place during the 1800’s. In 1874, the estate began calling itself Chateau Haut Brion Larrivet by the new owner, Ernest Laurent.

This was much to the consternation of Chateau Haut Brion. Although it took decades until an official lawsuit was filed to remedy the situation. In 1893, the property was sold to the Canolle family who were already experienced in the Bordeaux wine trade as they also owned Chateau Belair in St. Emilion.

At that time, the property  was much larger than it was today. For various reasons having to do with needing money, portions of their vineyards for Larrivet Haut Brion were sold to other neighboring properties like Chateau Haut Bailly.

In the late 1800’s, the estate was sold to Thomas Conseil. It was Thomas Conseil who changed the name of the chateau in 1949. The name change came about due to a lawsuit filed by the owners of Chateau Haut Brion.

The estate was allowed to retain Haut Brion in their name, provided it followed at the end of the title. This was easy enough. From that point forward, the wines were sold under the name of Larrivet Haut Brion.

Chateau Larrivet Haut Brion changed hands again when it passed to Jacques Guillemaud. Jacques Guillemaud began to replant the vineyards which had become dilapidated. In fact, only 3 hectares of vines were planted when he took over the property.

Chateau Larrivet Haut Brion is quite a popular wine these days. In fact, I think it is safe to say that their wines are probably the best known of the unclassified wineries in the appellation.

Today Chateau Larrivet Haut Brion is owned and managed by the Gervoson family who took over the property in 1987. The Gervoson family are better known for producing the popular line of jams and jellies from Bonne Maman.

Here’s a secret for you. When you visit the estate. make sure you ask to walk through their stunning, lush, verdant gardens, ponds and parkland. It’s incredibly verdant and peaceful.

It is possible that in the moderate future, some Malbec and Petit Verdot could also added to their vineyards. Larrivet Haut Brion has good neighbors.

They are close to Haut Bailly and La Louviere and they also have vines bordering Smith Haut Lafitte. The red wine grape varietals are on average, 25 years of age.

The vineyard is planted to produce both red and white Bordeaux wine grapes. For the white wine grape varieties, 11 hectares of vines are planted to 60% Sauvignon Blanc and 40% Semillon. Although there are some Muscadelle grape vines planted in their vineyards as well.

The terroir at Chateau Larrivet Haut Brion is a mixture of gravel and sandy soils. They have good neighbors. They are close to Haut Bailly and La Louviere and they also have vines bordering Smith Haut Lafitte. 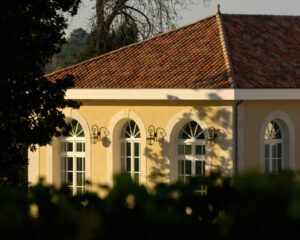 To produce the red wines of Chateau Larrivet Haut Brion, vinification takes place in stainless steel vats. Malolactic fermentation takes place in vat. The wine is aged in a combination of 70% new, French oak barrels and 24 large, clay amphora jars for between 15 and 18 months before bottling.

To produce the white Bordeaux wine of Chateau Larrivet Haut Brion, the grapes are whole cluster pressed. Vinification takes place in 100% new, French oak barrels. There is no malolactic fermentation. The white wines are aged on its lees in 100% new oak for about 12 months prior to bottling.

In 2013, the daughters and the estate’s second wine were both honored when they became one of the few Bordeaux chateau to have a flower named after them. The roses are called, Les Demoiselles Larrivet Haut Brion. Michel Rolland was the consultant. He was replaced by Stephane Derenoncourt.

Chateau Larrivet Haut Brion can be enjoyed on the young side with decanting. Young vintages can be decanted for an average of 1-2 hours, give or take. This allows the wine to soften and open its perfume.

Older vintages might need very little decanting, just enough to remove the sediment. Chateau Larrivet Haut Brion is usually better with at least 5-7 years of bottle age. Of course that can vary slightly, depending on the vintage character. Chateau Bouscaut offers its best drinking and should reach peak maturity between 8-18 years of age after the vintage.

Chateau Larrivet Haut Brion is a perfect match with Asian dishes, hearty fish courses like tuna, mushrooms and pasta as well as cheese.

The white wine of Chateau Larrivet Haut Brion is a perfect wine to serve with shellfish, sashimi, sushi, all types of seafood, chicken, veal and cheese.

In 2012, Larrivet Haut Brion began conducting a fun set of experiments. Bruno Lemoine, the director of the property held back two barrels of 2009 wine for extra aging. One barrel remained at Chateau Larrivet Haut Brion, the other was covered with cement and placed in the ocean in the oyster beds of Cap Ferret.

According to Bruno Lemoine, “We often hear about wines aged at sea being better quality, so I wanted to see what happened if we tried it as well.” He was referring to wines from 19th or 20th century that were lost at sea, due to shipwrecks.

Laboratory analysis showed the wine aged in the ocean had softer tannins and a slightly lower alcohol levels. As you might expect, there was also more saline in the wine as well.