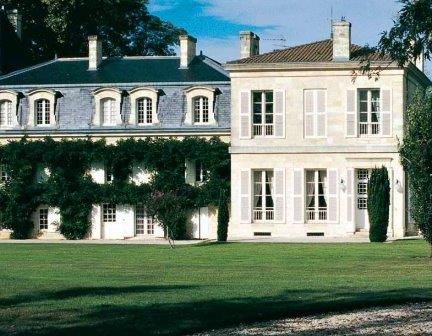 Learn everything about Chateau Saint-Pierre St. Julien, Fourth Growth with wine tasting notes and wine with food pairing tips. Learn the best vintages, a history of the property, information on the vineyards and winemaking. If you want to read about other important, Bordeaux Chateaux: Links to all the best Bordeaux Wine Producer Profiles

Chateau Saint Pierre dates back well into the 17th century. We know this from several, historical documents on the St. Julien estate. It was first planted in 1693. Before that, the land was used a farm, At the time the documents were written, the property went by the name of Serançon.

Managing a vineyard was not something the children were equipped to do. Between selling off parcels and their lack of investment, by the 1920’s, less than 2.5 hectares of vines remained! Shortly after that low point, the vineyards came under new Dutch ownership by The Van den Bussche company and both estates were once again reunited.

To add to the story, and bring us into the modern era, some of the better vineyard parcels were purchased by Alfred Martin, the father of Henri Martin. Henri Martin later added those plots to the vineyards for his other Saint Julien vineyard, Chateau Gloria.

In 1982, Henri Martin purchased the Medoc estate of what was known as Saint Pierre Sevaistre. Henri Martin recreated and renamed the property, St. Pierre. Henri Martin was born into a family with deep roots in the Bordeaux region, as their history can be dated back more than 300 years. Through marriage and inheritance, Chateau St. Pierre remains in the hands of the Martin family.

Today, Chateau St. Pierre is managed by Jean-Louis Triaud who is also in charge of Gloria and a few other estates as well. However, wine is not the only passion for Jean Louis Triaud, he is also the owner of the Girondins de Bordeaux, the professional football team of Bordeaux.

A complete renovation of the estate was finished in 2016. The renovation was designed by Alain Triaud. If the Triaud name sounds familiar, that is because he is the brother of Jean Louis Triaud, the owner of Chateau Saint Pierre. 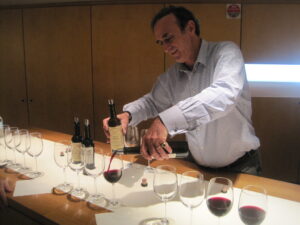 At 17 hectares, Chateau Saint Pierre is the smallest classified estate in the appellation. The vineyard can be divided into 4 main blocks with parcels spread all over the appellation.

The bulk of their vines are located close to the village of Saint Julien not far from Chateau Ducru Beaucaillou and Chateau Beychevelle. The vine density is 10,000 vines per hectare. The property has old vines. On average, many of their vines are close to 50 years of age. The terroir of Chateau Saint Pierre is gravel, sand and clay soils.

In 2016, Chateau Saint Pierre finished a multi year long, complete renovation of the entire wine making facilities, vat rooms, cellars, offices, reception areas and tasting tasting room. Even though the chateau has new cellars, interestingly, the wine is not made at Chateau Saint Pierre.

Due to a long standing arrangement in the St. Julien appellation, after harvesting, the grapes are transported to the chai of their other neighboring estate, Chateau Gloria, for vinification.

To produce the wine of Chateau Saint Pierre and Chateau Gloria, the grapes are fermented in 76 different stainless steel tanks that range in size from 50 hectoliters up to 178 hectoliters.

Malolactic fermentation takes place in barrel. The wine is then aged in an average of 60% new, French oak barrels for between of 14 to 16 months, depending on the style and character of the vintage.

While there is no official second wine, declassified lots and young vines are placed into Peymartin, the second wine of Chateau Gloria.

The Triaud family also produces the following Bordeaux wines; Bel Air from the Haut Medoc. From the St. Julien appellation, Peymartin, Haut Beychevelle and of course, Chateau Gloria. Interestingly, Chateau Saint Pierre remains one of the very few 1855 Classified Growth’s that does not produce a second wine. Production hovers close to 6,000 cases per year.

Starting with the 2005 vintage, Chateau Saint Pierre began investing time and serious money in their vineyards and cellars to produce the best wine possible. The results speak for themselves. The wines of Chateau Saint Pierre have never been better. 2009 is an outstanding wine as well as the 2010 from St. Pierre.

Chateau Saint Pierre can be enjoyed on the young side with a lot of decanting. Young vintages can be decanted for an average of 2-3 hours, give or take. This allows the wine to soften and open its perfume. Older vintages might need very little decanting, just enough to remove the sediment.