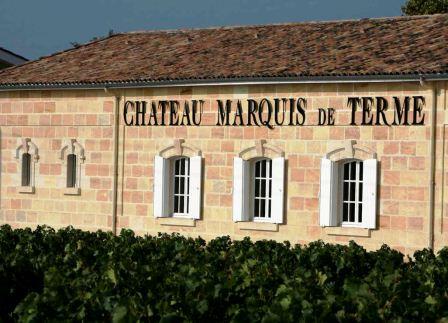 Learn everything about Chateau Marquis de Terme Margaux Fourth Growth with wine tasting notes and wine with food pairing tips. Learn the best vintages, a history of the property, information on the vineyards, and winemaking. If you want to read about other important, Bordeaux Chateaux: Links to all Bordeaux Wine Producer Profiles

Chateau Marquis de Terme is another Bordeaux wine estate with a long history. The original owner was Bernard de Faverolles. In 1661, September 7, he sold it to Pierre des Mesures de Rauzan. At the time, this was one of the largest properties in Bordeaux.

In fact, this Medoc estate was so big, it gave birth to four different Classified growths; Rauzan-Segla, Rauzan-Gassies, Chateau Desmirail, and Marquis de Terme! Like many properties in Bordeaux owned by wealthy families at the time, it was originally created through a marriage dowry.

It was a gift to celebrate the marriage of Mademoiselle Rauzan du Ribail to Jean Desmirail which helped create a dowry gift for the marriage between Elizabeth de Ledoulx d’Emplet and the Marquis de Termes, François de Peguilhan de Larboust.

In 1886, Chateau Marquis de Terme was purchased by Frederic Eschenauer, a very popular Bordeaux wine negociant. The Eschenauer family managed the chateau until it was acquired by Jean Feuillerat in 1898. Pierre Seneclauze bought the property in 1935.

In 2009, a complete renovation and modernization were finished for all the technical wine-making facilities at Chateau Marquis de Terme. In 2018 the Chateau opened a restaurant headed by chef Nicolas Lascombes. 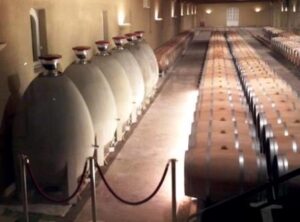 The 40-hectare, Left Bank vineyard of Chateau Marquis de Terme is planted to 60% Cabernet Sauvignon, 33% Merlot, and 7% Petit Verdot. This shows a slight change since the mid-1990s with less Cabernet Sauvignon and more Merlot planted today. The Cabernet Franc has also been removed from the vineyard.

The terroir is gravel, sand, limestone, and clay soils. On average, the vines are 30 years of age. The vines are planted to a density of 10,000 vines per hectare. Their best parcels of vines are located close to the chateau, not far from Rauzan Segla. They also have parcels in the Cantenac commune and a bit further south, they have vines planted next to Chateau dIssan.

Starting with the 2013 vintage, Chateau Marquis de Terme began experimenting with organic farming on a small parcel of vines. They are now farming their vineyards using only, 100% organic vineyard management techniques, and were certified organic in 2017. In 2020, in a bid to join the growing oenotourisme movement, the estate opened a restaurant on the property called Marquis.

The wine of Chateau Marquis de Terme is aged in a combination of 33% to 50% new, French oak barrels and a small amount of 600-liter, Nomblot, concrete, egg-shaped vats for an average of 18 months. The Nomblot eggs, which are used for an average of 8% of their production, first became popular due to their usage in the Rhone Valley by Michel Chapoutier.

The egg-shaped, concrete vats are said to add more minerality to the wine. Additional experiments are taking place with the portion of the wine aged in the egg-shaped vats by exposing the wine to a nano oxygenation technique that introduces tiny amounts of Nitrogen, Oxygen, and Carbon Dioxide into the wine.

Today Marquis de Terme is making the best wines in the history of the estate! So far, the 2015 is the best wine they have ever produced!

Chateau Marquis de Terme can be enjoyed on the young side with decanting. But you are better off giving the wine some time to develop. Young vintages can be decanted for an average of 1-3 hours, give or take. This allows the wine to soften and open its perfume. Older vintages might need very little decanting, just enough to remove the sediment.