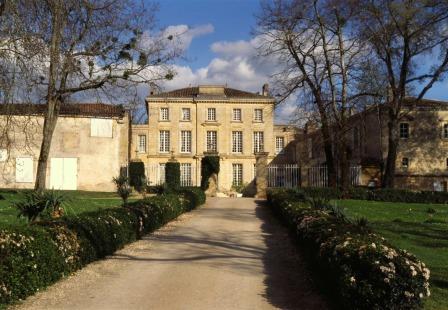 Learn everything about Chateau Figeac St. Emilion, Premier Grand Cru Classe B, with wine tasting notes and wine with food pairing tips. Learn all the best vintages, a history of the property and information on the vineyards and winemaking. If you want to read about other important, Bordeaux Chateaux: Links to all Bordeaux Wine Producer Profiles

Chateau Figeac is not an old Bordeaux vineyard. Figeac is an ancient Bordeaux vineyard! In fact, the genesis of the estate can be dated as far back as the second century during the ancient Gallo-Roman period. At that time, the owner of the property, Figeacus gave his name to the villa he built on the same location.

Even the ancient Romans knew Figeac had great terroir. Figeac is one of the few St. Emilion wine vineyards that has remained continually occupied for the past two thousand years.

If you’re visiting Chateau Figeac, you can easily see a water supply system that dates back to the days of the ancient Romans. There are also remains of building foundations, ruins from the Middle Ages and even defensive walls along with the remnants of the original Renaissance chateau at Figeac.

The Renaissance styling’s are easily noted in the famous door and the tower. The genesis of the chateau was built in 1586 by Raymond de Cazes. The current chateau was constructed in 1780.

In 1661, through marriage, the estate passed to the Carles family was renamed Chateau Carle Figeac. By the late 18th century, Chateau Figeac had already been owned by descendants of the de Cazes family for almost five centuries! By that time, the vineyards of Figeac had grown to a massive 200 hectares.

Much of the growth came from a major expansion headed by Elie de Carle before the French Revolution. Elie de Carle also owned what we know of as Chateau Clos Fourtet as well. At 200 hectares, Figeac was one of the largest Bordeaux vineyards in the entire appellation. That is not the case today.

Over the years, numerous owners have bought and sold different parcels and plots. This is the explanation as to why so many different chateaux in the region have Figeac in their name. The vineyards of Figeac were sold over a long period of time during the early 17th century and beyond, which led to the creation of several other Saint Emilion estates.

Portions of the land were also purchased by neighboring Pomerol produces like Chateau La Conseillante. One of the largest sections of Figeac was sold to the Ducasse family who used the land for Chateau Cheval Blanc.

By the time Figeac was purchased by the Chevremont family, the precursors to the Manoncourt family in 1892, the 200 hectare vineyard was now only 37 hectares of vines. Thierry Manoncourt took over managing the property starting in 1946. His first year at the estate was on a trial basis.

In 1947, Thierry Manoncourt took control of the property and never looked back. He was the first in his family to live at the estate. Born in Paris, Thierry Manoncourt earned a degree in agronomy. He was one of the founders of the Bordeaux Grand Crus Union. He was president of the Jurade of Saint Emilion from 1964 to 1987. Thierry Manoncourt was as traditional as he was innovative. When he completely renovated the cellars and wine making facilities.

Thierry Manoncourt made the then bold move of having Figeac be the first major estate in the Right Bank to use temperature controlled, stainless steel vats in the fermentation room. This took place in 1971. It was also the idea of Thierry Manoncourt to have Chateau Figeac become the first important estate in the Right Bank to produce a second wine.

Thierry Manoncourt passed away Friday, August 27, 2010, at his beloved Chateau Figeac, located in St. Emilion. One of the last of the old guard, he was only a few days shy of his 93rd birthday. Funeral services were held in Saint Emilion.

The wine of Chateau Figeac went through a period of making wine not up to the quality of its terror over the past several decades. It can be argued that Figeac was not up to par since the great 1964.

Following the reclassification of St. Emilion in 2013, when Figeac lobbied, but did not come close to receiving its much, sought after promotion to Grand Cru Classe A status, Figeac made steps to improve their wines, image and position on the marketplace. 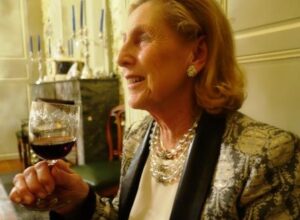 Having tasted the 2012, and 2013 where Michel Rolland assisted in the blending, the wine is clearly better. And let me set the record straight, the 2015 Figeac is mind blowing! The difference in the wines were especially noticeable in the mid palate, density and texture.

The next decision was to retire the previous director, who managed Chateau Figeac since 1988, Eric d’Aramon. This was a difficult move as Eric d’Aramon was the son in law of Thierry Manoncourt. d’Aramon was replaced by Frederic Faye as the director at the behest of Madame Marie-France Manoncourt.

Once Frederic Faye was firmly in place, he made a few, other important changes. In the barrel cellars, he installed new temperature controlled units with ventilation. The following year the chateau modernized their cellars, removed their older pumps and started moving everything by gravity flow.

His next efforts were in the vineyards, with additional planting of Cabernet Sauvignon vines that were hoped would be a better fit for the warm, gravel soils.

In 2015, Chateau Figeac started a major renovation and modernization of the cellars that allowed for complete plot by plot vinification which was finished completed in 2018. 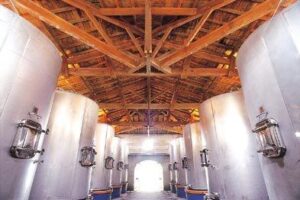 Starting in 2009, things began to turn around with the 2012 and the 2015 Figeac was a contender for the best wine made in the history of the estate! That is until the mind blowing 2016 was produced! Considering all the great older vintages, that is really saying something.

The preponderance of both types of Cabernet in the vineyard and in the wine can often make Figeac a difficult wine to taste En Primeur. Figeac often needs a few extra months for the blend to really come together and show its potential.

They have old vines. In fact, the oldest vines belonging to Chateau Figeac are now close to 100 years of age! On average, they are 45 years of age. Interestingly, many of the estates vines were personally planted by Thierry Manoncourt with some help from Madame Marie France Manoncourt.

As we mentioned earlier, the vineyards of Chateau Figeac are planted to different proportions from what you can find in any other Saint Emilion vineyard, and in all of Bordeaux as well. In part, this has a lot to do with the unique fine, gravel based soils. This terroir is uncommon in the Right Bank with its gravel, quartz, iron, clay and sand soils.

Figeac is situated in the graves region of Saint Emilion, which takes its name as you might guess, from the gravel in the soil. There are 5 gravel hillsides in this area, and 3 of those hills are at Figeac.

The 3 gravel ridges that make up the vineyard also play a pivotal role in the terroir, and thus the wines character and style. The gravel affords natural drainage and offers the perfect home for their unique varietal makeup.

At their peak, they reach 38 meters at the top of the slopes. The ridges run north to south, affording a southern exposure. You find most of their Cabernet Sauvignon on the gravel plateaus and the Cabernet Franc, further down the slopes.

As you travel east, you find more clay. If you head west, the soil is lighter, with more sand. More than 50% of the vines are farmed organically. In 2009, the estate started their own massale selection program taken from the oldest vines from each of the three grape varieties in the vineyard.

It should be noted that along with Chateau Cheval Blanc, Chateau Figeac is one of the few great terroirs of Saint Emilion not situated on the limestone based soils of the cotes. Interestingly, until the 1950’s, the vineyard of Chateau Figeac maintained close to 5% Malbec. There was also a tiny portion of Petit Verdot planted in the vineyards until 1956.

All those vines were eventually removed. The vineyard, located close to Chateau Cheval Blanc and Pomerol, with its gravelly terroir explains in part, why Figeac is able to produce such an elegant wine.

However, the entire estate is not reserved for vines. They have a massive garden replete with a myriad of flowers. There is a lake with swans, geese and ducks located behind the personal family home. This is truly a unique oasis in Saint Emilion. 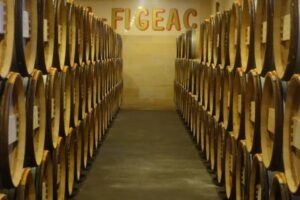 This allows for parcel by parcel vinification. Since 2009, malolactic fermentation takes place in barrel. Chateau Figeac is then aged in 100% new, French oak barrels for between 14 to 18 months before bottling.

The blend of Chateau Figeac most often relied on equal portions of Merlot, Cabernet Franc and Cabernet Sauvignon in the past. Today, that is no longer the case.

The blend varies from vintage to vintage, depending on the character of the year, and how each separate grape variety performed.

The average annual production of Chateau Figeac is close to 10,000 cases per vintage. There is a second wine, La Grange Neuve de Figeac which made it’s debut with the 1945 vintage.

Here’s a nice fact for you, Thierry Manoncourt was the first Right Bank producer to create a second wine. In 2013, the second wine was renamed Petit Figeac. In 2014, the estate became to first Saint Emilion property to inspect each cork, before bottling.

Chateau Figeac is much better with at least 12-15 years of aging in good vintages. Young vintages can be decanted for 2-3 hours, or more. This allows the wine to soften and open its perfume.

Older vintages might need very little decanting, just enough to remove the sediment. Chateau Figeac offers its best drinking and should reach peak maturity between 12-40 years of age after the vintage.

In addition to Figeac, the Manoncourt family owns 2 other small estates in Saint Emilion, Chateau La Fleur Pourret, which comes from 4.5 hectares of vine is located not far from the village of St. Emilion and Chateau de Millery, which is produced from a tiny 1 hectare parcel of vines in the eastern portion of the appellation in the commune of Saint Christophe des Bardes.