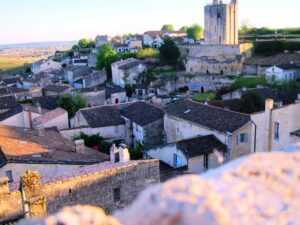 The complete guide to the continuing, changing St. Emilion classification.

While it looks difficult to comprehend at first, especially for American wine buyers, as they do not correspond to the famous 1855 Bordeaux Classification, the levels of classification are easy to understand and follow.

In my view, some of those estates at the Grand Cru Classe level could be elevated to the level of First Growths. On the other hand, there are vineyards that based on the quality of their wine could be demoted. And there are estates that are not classified that deserve to be Grand Cru Classe as well as Premier Cru Classe.

Perhaps in the next classification, (assuming there is one) they will have 2 levels of Grand Cru Classe, A, and B that would show which wines in that large classification were better than the others. At the end of the day, the market is the only true classification that matters.

Let’s take a look at the various levels of the St. Emilion classification.

Wines bearing the Grand Cru designation could be as good as Grand Cru Classe, or even at the level of a Premier Grand Cru Classe wine. However, generally speaking, wines at the Grand Cru level are not as good as the 71 wines included in the St. Emilion classification. Examples of top Saint Emilion estates that have chosen not to be classified are Tertre Roteboeuf and Chateau Le Dome.

The following criteria were used to come up with the results of the 2022 Saint Emilion Classification.

Saint Emilion Premier Grand Cru Classe status in the St. Emilion classification, they were required to provide samples of the previous 15 vintages. Chateau were graded on a 20-point system. Premier Cru Classe wines needed to score at least 16 of 20 points to earn Premier Cru status.

Points were awarded based on the following criteria.
50% Tasting
35% Reputation, Advertising, and Value
10% Terroir, Property Tax Base, and Uniform Quality of the terroir
5% Methods used in Winegrowing and Oenology

This is an improvement from the 2012 classification which awarded points on a different scale, with less of a focus on the wines. For 2012, the wines were only 30% of their total points.

Saint Emilion Grand Cru Classe status in the 2022 St. Emilion classification, they needed to provide samples of the previous 10 vintages.

While the chateaux were judged with more weight awarded to the wines, the estates were not judged solely on their wines. Other factors came into play.

50% Tasting
20% Reputation, Advertising, and Value
20% Terroir, Property Tax Base, and Uniform Quality of the terroir
10% Methods used in Winegrowing and Oenology

There is one key aspect that is good for wine buyers and chateaux with the continuing reclassifications. Estates wishing to be upgraded and vineyards hoping to retain their classification are forced to compete and continually make improvements in their wine, vineyards, and cellars. This can be seen all over the appellation!

Last, and least, the estate and its practices were also a part of the consideration in the current St. Emilion classification. For Grand Cru Classe status, that came in at 20% of the score, while it was only worth 5% of the score for Premier Cru Classe status. With all these facts, numbers, and figures floating around, Classified estates are in the minority in St. Emilion. As a reasonable guess, wines in the St. Emilion Classification at best count for about 10% of the production of the entire St. Emilion appellation.

As always changes took place with the 2022 St. Emilion classification.

Chateau Ausone, Chateau Cheval Blanc, and Chateau Angelus dropped out of the classification and starting with the 2022 vintage, will not be able to state Premier Grand Cru Classe A on their labels.

Chateau La Gaffeliere declined to continue as a classified estate and as of the 2022 vintage, they will no longer display Premier Grand Cru Classe B on its label. Chateau Croque Michotte also left the Classification. Château L’Arrosee, Chateau Château Grand Pontet and Chateau Tertre Daugaywere merged into Chateau Quintus.

Of course, you had multiple changes with the 2012 Saint Emilion classification as well. Chateau Magdelaine was absorbed into Chateau Belair-Monange. Chateau Bergat was added to Chateau Trotte Vieille. Chateau Cadet Bon was merged into Chateau Soutard. La Tour du Pin was annexed into Chateau Cheval Blanc and Chateau Angelus was also allowed to add a few more hectares of vines to their estate.

On the other side of the coin, Valandraud agreed to remove some hectares of vines that were not deemed suitable for Premier Cru Classe B status.

The biggest issues arose with the 2012 classification after it was certified by the French government when in January 2013, three producers filed a suit seeking to have the 2012 St. Emilion Classification amended.

Chateau Croque Michotte and Pierre Carle led the charge, which was followed by Chateau Corbin Michotte and Chateau La Tour du Pin Figeac. The basis behind the suit was a claim about errors in the process, supposedly based on uncovered minutes from meetings about the classification.

In March 2014, author Isabelle Saporta published “Vino Business.” The book stated the 2012 St. Emilion Classification was fixed. Among her claims was the larger chateaux were able to fix the criteria for what was needed to retain their higher levels of classification.

She added that some critics were paid thousands of Euros for better scores and comments. Hubert de Bouard, the owner of Chateau Angelus, which was upgraded to Premier Grand Cru Classe A was personally targeted in the book. Within days of being published, Hubert de Bouard filed a suit of libel and defamation of character. de Bouard was not successful in his suit.

In December 2015, just a few days before Christmas, the French, Bordeaux Administrative Court dismissed the lawsuit and legal challenge brought by the 3 chateaus. The legal efforts to derail the classification continued against Hubert de Bouard and Philippe Castaja for conflicts of interest and undue, overreaching of power and influence.

While the classification matters when it comes to land values, the truth is, that the market sets the price for the wine. Classified wines do not always sell for more than unclassified wines. We’ll need to wait and see what happens. It will be interesting to see what takes place in 2032 in the next official Saint Emilion classification.

This is the complete list of 85 chateaux that earned classification status in the 2022 St. Emilion Classification.

Chateau Figeac (A)
Chateau Pavie (A)

There were several changes with the 2022 classification from the previous classification. As we mentioned previously, most notably, Cheval Blanc, Ausone, and Angelus declined to participate as well as La Gaffeliere, La Clotte, and Quinault L’Enclos.

A few vineyards no longer exist as they were merged into other estates. Pavie Decesse is now part of Pavie, Les Grandes Murailles will be included within Clos Fourtet and Clos la Madeleine is not currently in production as the vineyard has been completely replanted. It is my guess that the vines could eventually be added to Belair-Monange. Faurie de Souchard is also not on the list, and here again, it is possible the vines will eventually be included in Chateau Dassault.

The St. Emilion classifications are based on soil, terroir, a tasting of the wine, the wine-making facilities, efforts at promotion, and the reputation of the vineyard. The system worked reasonably well until the most recent reclassification from 2006 was slated to be certified.

The Saint Emilion classification has not been easy. As you can see below, there have been numerous issues and lawsuits over the years.
In
March 2007, The Bordeaux administrative council suspended the classification based on the claims and suits filed by four Bordeaux wine properties that had been demoted.

The four chateaus filing the suit were: Chateau La Tour du Pin Figeac, Chateau Cadet Bon, Chateau Guadet, and Chateau de La Marzelle. The basis of their suit was the results were discriminatory, because not every property was visited personally by the 12-member St. Emilion Commission.

In late 2007, France’s highest administrative court lifted the suspension of classification allowing the previously agreed changes to appear on the labels for the 2006 vintage. However, while the results of the 2006 St. Emilion classification are now official, the 4 excluded estates that brought the suit had the right to appeal, which they did. Their suit was not successful. But a reclassification was ordered to take place in 2012.

The first list of classified wines from St. Emilion was published on June 16, 1955. The original St. Emilion classification was amended on August 7 and October 18, 1958. The debut list contained 12 Premier grand crus classés and 63 Grand crus classés. The local Wine Growers’ Union planned on having the classification revised every ten years, to keep it from becoming rigid or outdated.

Although this is not happening on schedule, it has been revised several times, most recently in 2006. But in 2006, things did not go exactly according to plan, as you have read.

Summary of changes to the St. Emilion classification

NOT RETAINED IN THE CLASSIFICATION: 10