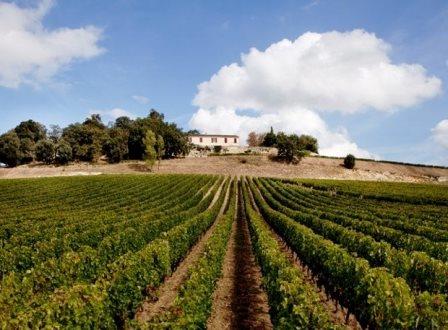 Learn everything about Chateau Quintus St. Emilion with wine tasting notes and wine with food pairing tips. Learn the best vintages, the history of the property, and information on the vineyards and winemaking. If you want to read about other important, Bordeaux Chateaux: Links to all Bordeaux Wine Producer Profiles

Chateau Quintus did not take its name from a previous owner like so many chateaux in St. Emilion. That’s because the rebirth of the estate, and its new name, officially came into being in 2011.

This took place after being purchased in May 2011, from Count Leo de Malet-Roquefort, the owner of La Gaffeliere, by Domaine Clarence Dillon, who also owns Chateau Haut Brion and Chateau La Mission Haut Brion in Pessac Leognan.

Previously known as Chateau Tertre Daugay, the new owners chose to rename the estate Quintus, because it is considered the fifth Bordeaux wine owned and produced by Domaine Clarence Dillon.

Quintus is translated from Latin into the number 5. Many ancient Roman families named their fifth child Quintus. As the Romans were the first people to plant vines in Saint Emilion, and this is the 5th winery for the company, the name is quite fitting.

At the time of the purchase by Domaines Clarence Dillon, the vineyard of Quintus was 15 hectares. However, that changed in 2013 when it was announced that the vines from Chateau L’Arrosee would be merged with Quintus, creating a much larger vineyard that was now almost double the original size. The vineyard was once again enlarged with the purchase of Chateau Grand Pontet in 2021.

The vineyards were also in much better shape thanks to their efforts at replanting. Part of the goal with the extensive work in the vineyards was to increase the level of vine density, as well as remove the remaining Cabernet Sauvignon plants and replace some of their Cabernet Franc vines.

The 45 hectare Saint Emilion vineyard of Quintus is planted to 67% Merlot and 33% Cabernet Franc. The vineyard has a terroir of clay and limestone soil.

Located on the far, southwest, of the plateau, the vineyard has elevations that reach 62 meters at its peak. The vineyard of Quintus has two different types of limestone in the soils. The best part of their terroir is on the limestone slope, which is used for Quintus. The vines at the bottom of the slopes are reserved for their second wine.

The small amount of Cabernet Sauvignon previously planted here was ripped from the vineyard and replaced with Cabernet Franc. On average, the vines are more than 30 years of age. However, a portion of the original vines is old. Some of their oldest vines are close to 100 years of age!

On average, the production of Chateau Quintus is expected to be close to 8,000 cases per year once the winery and vineyards are running at full speed. There is a second wine, Le Dragon de Quintus. The estate also makes a small amount of a third wine, Saint Emilion de Quintus, which is sold primarily to restaurants. 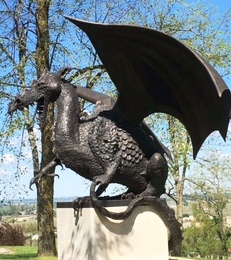 The same team that produces Chateau Haut Brion and Chateau La Mission Haut Brion, managed by Jean Philippe Delmas will be responsible for making the wines of Chateau Quintus. With a good terroir, the ability to spend what it takes to produce the best wine possible, and an experienced winemaking team, this will be an exciting Right Bank wine to watch develop.

Chateau Quintus is marketed in a special bottle that was modeled after an ancient bottle of Haut Brion that was recently discovered from an old pirate’s lair. The bottle also features a raised seal engraved in the glass, which mirrors the design of the old Haut Brion bottles. The wine is sold in 6 packs, with a special wood case.

Chateau Quintus is much better with at least 7-9 years of aging in good vintages. Young vintages can be decanted for 1-2 hours or more. This allows the wine to soften and open its perfume.

Older vintages might need very little decanting, just enough to remove the sediment. Chateau Quintus offers its best drinking and should reach peak maturity between 9-30 years of age after the vintage.

Chateau Quintus is a perfect match with Asian dishes, hearty fish courses like tuna, mushrooms, and pasta as well as cheese.

2011 was the debut vintage for Chateau Quintus and Le Dragon de Quintus. When Chateau Quintus was originally offered for sale with its first vintage produced from the new owners, the price almost tripled from all previous vintages. The market did not take well to the massive jump in price.

That being said, with the Chateau Haut Brion team behind the estate, it will be interesting to see what develops over the next few years. After tasting several vintages, it is clear that the wine is definitely improving in quality and character. By the 2016 vintage, Chateau Quintus really upped their game and began producing very strong, Saint Emilion wines.