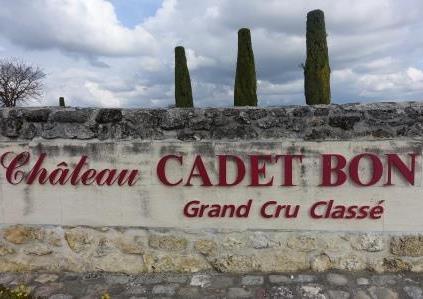 Learn everything about Chateau Cadet Bon St. Emilion with wine tasting notes and wine with food pairing tips. Learn the best vintages, the history of the property, and information on the vineyards and winemaking. If you want to read about other important, Bordeaux Chateaux: Links to all Bordeaux Wine Producer Profiles

Chateau Cadet Bon takes its name from two sources, its location in the Cadet lieu-dit and one of the founding owners of the original St. Emilion estate, Pierre Bon, which gives you Cadet Bon. Today the estate is owned by Guy Richard and Mylene Richard. The Richard family purchased Chateau Cadet Bon in 2001 from Bernard Gans who had owned the vineyard since 1992.

Chateau Cadet Bon was one of the four St. Emilion chateaux to formally sue and contest the results of the 2006 Saint Emilion Classification as they were demoted in the classification.

The 7-hectare vineyard of Chateau Cadet Bon is planted to 80% Merlot and 20% Cabernet Franc. The Right Bank estate is situated just north of the Saint Emilion village. The vineyard is one single parcel of vines. However, the vineyard is laid out in two different sections.

The larger portion of the estate is the 4.6 hectares of vines that are in classified terroir. The smaller section, 2.4 hectares is used to produce their second wine, because that terroir is not classified. The terroir is limestone over clay soils. They have old vines. Many of which are on average, 35 years of age. Though they have some older vines as well. The vineyard is farmed using 100% biodynamic farming techniques.

The wine is then aged in 33% new, French oak barrels for between 12 to 18 months, depending on the vintage. Stephane Derenoncourt is the consultant. On average, the production of Chateau Cadet Bon is close to 2,000 cases per year. There is a second wine, Vieux Moulin du Cadet.

Prior to 2009, Chateau Cadet Bon was not a Saint Emilion wine that was on most people’s minds. Since the team of Stephane Derenoncourt started working with the estate in 2005 the wines have remained on a steady, course of improvement. 2010 is the best vintage I’ve tasted of Chateau Cadet Bon yet.

However, 2015 and 2016 are going to give previous years a run for their money as the wines age and develop.

Young vintages can be decanted for up to 1 hour or so. This allows the wine to soften and open its perfume. Older vintages might need very little decanting, just enough to remove the sediment.