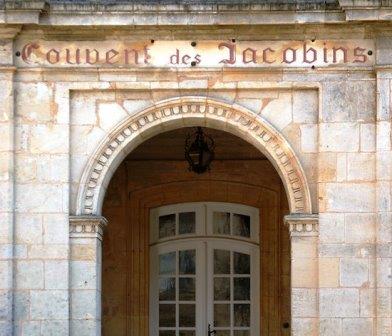 Learn everything about Couvent des Jacobins St. Emilion with wine tasting notes and wine with food pairing tips. Learn the best vintages, the history of the property, and information on the vineyards and winemaking. If you want to read about other important, Bordeaux Chateaux: Links to all Bordeaux Wine Producer Profiles

Couvent des Jacobins is situated right in the center of the picturesque, Saint Emilion village. The actual chateau is located on the site of an ancient, 13th-century Dominican monastery. The Dominican part of the name comes from Saint Dominic de Guzman. The estate takes its name from the order of Friars and preachers that were responsible for the Dominican monastery, Freres Precheurs Jacobin.

The 11 hectare Right Bank vineyard of Couvent des Jacobins is planted to 75% Merlot and 20% Cabernet Franc and 5% Petit Verdot. This marks a change in the plantings here, with an increase in the amount of Cabernet Franc as well as the addition of Petit Verdot, which was used in the blend for the first time in 2014.

They have vines planted in three different sectors of St. Emilion, giving the estate a mix of terroirs that consist of mostly, sand, clay, and some limestone in their soils. Those three main blocks are further separated into 69 different parcels of vines. This makes farming difficult here because the parcels are in quite a diverse array of terroirs.

The vineyard blocks are located close to Chateau Grand Mayne, Chateau Laroze and they also have vines planted not far from the town of Libourne, close to the train station.

They have old vines, many of which are close to 45 years of age. The vineyard is planted to a vine density of 7,000 vines per hectare. Starting in 2015, the estate moved to 100% organic farming methods. They were certified organic by Ecocert starting with the 2020 vintage.

In 2015, the estate introduced a new wine, a special micro-Cuvee made from a selection of their oldest vines, planted in 1961 on sand and clay terroir. “Calicem” is made from 100% Merlot that is aged in a combination of 70% Demi Muid and new, French oak barrels. The wine is riper, richer, and deeper than the regular Cuvee.

The production is quite small as less than 250 cases are produced from under 1 hectare of old vines. The estate also produces a second wine, Le Menut des Jacobins. On average, production at Couvent des Jacobins is close to 3,250 cases of wine per vintage for this Saint Emilion estate.

Younger vintages can be decanted for up to 1 hour or so. This allows the wine to soften and open its perfume. Older vintages might need very little decanting, just enough to remove the sediment.