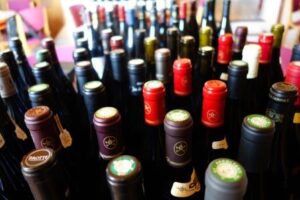 For Bordeaux wine lovers and consumers who just like wine, this is the best wine event of the year! This year, the focus is on the extremely highly regarded 2009 Bordeaux vintage. Having tasted these wines multiple times from barrel to bottle, (most recently last June in Bordeaux) 2009 is an outstanding vintage for Bordeaux wine.

If you have not attended a UGCB tasting before, this event awards guests the opportunity to taste over 100 different wines, as well as meet and talk with the owners of the chateaux that produce the wine.

We will be at the Los Angeles event and will publish a detailed article on the wines tasted with tasting notes and reviews. If anyone else catches the event in LA, or in any of the other cities, we’d like to hear from you and your notes and comments on the event and on all the wines you tasted as well.

The tastings are a combination of trade and consumer events.

Friday, January 20 – Los Angeles is hosting both trade and consumer tastings.  The trade tasting will be held at the The Fairmont hotel in Santa Monica  from 1pm-5pm. This will be followed by two consumer tastings hosted by Wallys Wines.  Wallys is kicking off the night with a unique, charity, tasting event beginning at 6pm with 100% of the proceeds going to the Horatio Alger Association Scholarship Fund. That will be followed by the main event which takes place from 7-10 pm at The Peterson Automotive Museum. 6060 Wilshire Boulevard, Los Angeles, CA.

Saturday, January 21, San Francisco – Hosted by K & L Wine Merchants the event is open to the public and will be held at the Palace Hotel.  For tickets and information – www.sherry-lehmann.com/events

Wednesday, January 25, New York is a trade tasting being held at the Marriott Marquee.

Thursday, January 26, Chicago – Trade tasting from 1-5pm at The Sheraton Hotel and Towers. A consumer event takes place later that night from 6-8 pm at the same location. The event is hosted by Binnys. http://binnys.com/blogs/post.cfm/union-des-grands-crus-de-bordeaux-2009-vintage-tasting

Not all producers will attend every event. This is a list of the 2009 Bordeaux wines being poured by the various Chateaux for the UGC 2009 Bordeaux tastings:

Complete Bordeaux Wine History and Description of the Wines