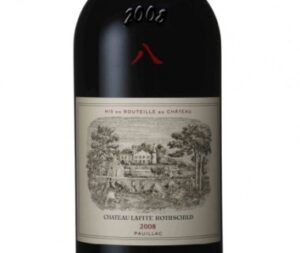 2011 was not a great year for most wine Wine investments.   Generally speaking, the price of Bordeaux wine follows the stock exchange.  But that is not what took place in 2011. People making wine investments were slammed with losses. In the what goes up, must come down category, the world’s most collectible wine, Chateau Lafite Rothschild, from Pauillac in Bordeaux took the biggest hit.  To some savvy investors, this wine investment loss was to be expected.  The logic behind that was, Lafite took the highest gains, so it should also follow that Lafite experience the most dramatic loss to people making wine investments in Lafite Rothschild.

The potential straw that broke the camel’s back for wine investments in 2011 was the release of the 2008 Lafite Rothschild.  The vintage pandered to the interest in Lafite by the Asian market by including an embossed Chinese figure of the number 8 on the glass.   The wine was first offered for sale at $200. By the time the wine was bottled less than two years later, prices soared to $1,500 per bottle.  Today, the same wine can be bought for close to $750.  That is still a huge markup from the original offering price. But for people buying at the high end, that was not a smart wine investment.

While money can be made by making a savvy  wine investment in Bordeaux wine, we do not recommend it.  If you’re dead set on putting your money in Bordeaux for the purpose of investing, buy sealed cases of wines rated 100 Pts by Robert Parker.  That is the safest bet in the long and short run.

Lafite Rothschild was not the only wine to lose value.  The entire market lost value. The fine wine industry’s leading benchmark – fell 3.90 per cent in December. Having declined for six consecutive months, the index closed at 286.33 – down 14.85 per cent for the year.

The Liv-ex Fine Wine 50, which tracks the daily price movement of recent vintages of the Bordeaux First Growths, fell rapidly between Christmas and New Year. Soft demand saw the benchmark lose 4.96 per cent in December – its fourth-largest monthly fall since January 2000. Encumbered by third and fourth quarter price drops, the index ended the year at 334.45 – a change of -16.62 per cent.

Although price falls at the top end of the market weighed heavily on the Liv-ex Indices, losses were not confined to First Growth quarters. The Liv-ex Fine Wine Investables (which tracks the chateaux commonly found in a wine investment portfolio) dropped 3.13 per cent for the month to 300.55. The index fell 9.97 per cent in 2011.