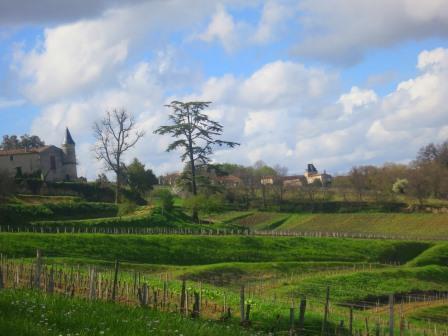 While wines like the First Growths and the most famous wines of Pomerol and St Emilion garner most of the attention of the press, that does not paint the entire picture of Bordeaux wine. In fact, much of what the appellation does best, is produce, charming, character filled wines that offer value. 2012 Bordeaux value wines are going to be easy to find, especially from the various satellite regions, Bordeaux Superieur, Cotes de Castillon and other areas. Plus, because the wines are most often made in large quantities, they will be easy to buy, and 2012 Bordeaux value wines for the most part, will be drinkable on release. The one problem consumers need to be aware of in this vintage is estates that over extracted and used too much new oak in their wine. This report should help you find numerous 2012 Bordeaux value wines that as the title implies, sell for fair prices.

2012 d’Aiguilhe – From a blend of 80% Merlot and 20% Cabernet Franc, the wine will be aged in 50% new French oak barrels. Ruby in color, plush, forward, and offering sweet black raspberries with fennel, drink this on the young side. 88-90 Pts

2012 d’Aiguilhe Querre – Medium-bodied and simple with red berries and some dryness in the finish. 86-88 Pts

2012 Alcee – The second vintage for Nicolas Thienpont was made from 95% Merlot and 5% Cabernet Franc, the wine is a step up after the debut vintage. Licorice and dark berries provide a sweet, fleshy and jammy wine with freshness and minerality. 88-90 Pts

2012 Bolaire – This unique wine is produced with the highest percentage of Petit Verdot in Bordeaux, with more than 54% in the blend, and is packed with spicy, fresh red berries. 87-89 Pts

2012 du Bouscat Caduce – Medium-bodied with licorice and blackberries, the wine is round, simple and easy to quaff. For a wine that will sell for $10-12, this represents great value. 86-88 Pts

2012 du Bouscat La Gargone – Fennel, earth, black cherries and jam are produced from a blend that includes 20% Malbec. Made from low yields, the wine is fresh, lively and represents true value. 88-90 Pts

2012 Clos Lunelles – Ruby in color with intense stone, oak and spicy black cherries and anise, the wine is medium-bodied with elegant, soft textures and a spicy, long and fresh finish. 89-91 Pts

2012 Croix de Justice – With fresh berries, chocolate and black cherries, this wine has lush, sexy textures, depth and minerality. What’s not to like? Bravo for its debut vintage. 89-91 Pts

2012 Croix Mouton – From 94% Merlot and 6% Cabernet Franc, this forward, sweet and oaky wine will be best in its first few years of life. This crowd pleaser is a steal at this price. 86-88 Pts

2012 Le Conseiller – From 100% Merlot, the wine is filled with tobacco, oak, soft textures and a forward style. The finish displays oak, so it’s not for the oak averse. That being said, as long as youdrink this young, it’s one of the best Bordeax value wines available. 87-89 Pts

2012 Dalem – Medium-bodied with a crisp red berry and anise-filled personality, this will drink well on release. 87-89 Pts

2012 Domaine de l’A – Owned by renowned consultant Stephane Derenoncourt and Christine Derenoncourt. Produced from a blend of 70% Merlot and 30% Cabernet Franc, the wine reached 13.5% alcohol and will be aged in 100% new French oak. Spicy red and dark fruits, coffee bean, and earthy notes are in the forefront. On the palate, the wine is medium-bodied, soft and delivers a mineral-driven, plummy finish. 88-90 Pts

2012 Domaine de Cambes – Not to be confused with Roc de Cambes, as this is parcel selection and not a second wine. This medium-bodied wine offers fresh herbs, spice and red berries. 87-89 Pts

2012 du Gaby – Light in color with a spicy, oak and berry note in the aroma, the medium-bodied wine is focused on sweet red cherries and will be drinkable on release. 86-88 Pts

2012 de Francs Les Cerisiers- Medium-bodied with fennel, cherries and herbs, the wine will be ready to enjoy on release. 87-89 Pts

2012 de Franc Infinity – This is the debut vintage for this 100% Merlot-based wine which is whole berry fermented in barrel and aged in 100% new French oak barrels. The production is small. Only 100 cases were produced. Cherries, minerality, oak and supple textures with medium body are the hallmarks of this wine. 89-91 Pts

2012 Fontenil – Oak, black and red fruits with fleshy textures and sweet, jammy cherries are found in this Michel and Dany Rolland-owned wine. 88-90 Pts

2012 G, which takes its name from the first letter of the famous owner’s last name Guinaudeau, who also owns Chateau Lafleur in Pomerol, was produced from a blend of 51% Merlot and 49% Cabernet Franc. Medium-bodied with sweet black raspberries and cherry sensations, the wine is soft, forward and approachable. 88-90 Pts

2012 Les Grands Marechaux – Medium- bodied with wild strawberries and a light red berry finish, this is best drunk in its youth. 84-86 Pts

2012 Joanin Becot – Soft and ripe with licorice and black raspberry, this delicious and round wine will drink on release. 88-90 Pts

2012 La Laurence – This soft, forward, crowd-pleasing and plump style of Merlot-based wine will be perfect to drink on release. This new wine is a joint venture between Hubert de Bouard and Philippe Nunes. 86-88 Pts

2012 Le Pin Beausoleil – With 85% Merlot and 15% Cabernet Franc in the blend, the wine is spicy and medium-bodied and ends with red berries and herbs. 85-87 Pts

2012 Marjosse – Light red berries, herbs, soft textures and forward personality make this a wine to drink in its first year or two years of life. 84-87 Pts

2012 Marjosee Blanc – With citrus and a touch of grapefruit, this fresh, bright, refreshing and well-priced Bordeaux Blanc is one of the better values from Entre deux Mers. 85-87 Pts

2012 Montlandrie – From 75% Merlot and 25% Cabernet Franc, from clay and limestone soils, this wine opens with oak, licorice and dark berries and is fleshy, but dry in the finish, 85-87 Pts

2012 Moulin Pey Labrie – Ripe and overripe, jammy fruits, licorice and earth notes are there, but the wine feels forced and over extracted, leaving a dry sensation in the finish. With luck, aging will bring this wine around. 84-86 Pts

2012 La Prade – 90% Merlot and 10% Cabernet Franc – A kiss of oak touches dark red berries with an earthy, easy-to-like personality that will make this easy to drink on release. 87-88 Pts

2012 Reignac – Medium/full-bodied, with an open personality, the wine is filed with oak, licorice and jammy berries. At the moment, the oak dominates the fruit in the finish. 88-90 Pts

2012 La Riviere Aria – Deep in color with licorice, flowers and jammy berries in the nose, the wine is rich, deep, ripe, jammy and full-bodied with a chocolate-covered, black cherry finish. 89-91 Pts

2012 La Rousselle – Blending 65% Merlot and 35% Cabernet Franc, the wine offers licorice, black cherry and earthy notes in the nose. Soft in texture, but short in the finish. 85-87 Pts

2012 Soleil Le Rival – Dominated by Merlot, the wine opens with coffee, black cherry, licorice and cocoa. Sweet, round and forward, this will be fun to drink young. 88-90 Pts

2012 Vieille Cure – Deep in color with licorice, espresso, smoke and jammy berries in the nose, the wine is packed with soft, sexy, supple-textured fruit that is already fun to drink. And it’s always available for a fair price. 89-91 Pts

2012 Virginie Thunevin – With oak and red fruits, this medium-bodied wine has a sweet and sharp red berry finish. 85-87 Pts