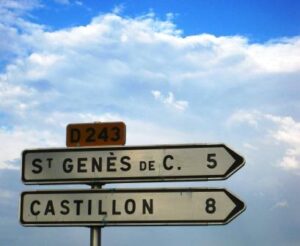 .
The satellite appellations for this report on 2011 Bordeaux value wine combined all the different areas I tasted from that are not from the major Bordeaux appellations. Satellite appellations can offer some of the best quality-for-the-money wines. Many of these Bordeaux wines would do well in blind tastings with wines from more illustrious terroirs. Cotes de Castillon, Fronsac, Bordeaux Superieur and other appellations are covered in this article.

2011 20 Mille is produced from a 1.4-hectare section of the Croix Mouton vineyard planted to 100% Merlot. The wine takes its name from the fact that it’s planted to 20,000 vines per ha. Mineral and blackberry with a bright, cherry, red berry finish. 87-89 Pts

2011 d’Aiguilhe – From a blend of 80% Merlot and 20% Cabernet Franc, this wine will be aged in 45% new oak. From limestone soil similar to what is found on the St. Emilion plateau, it shows flowers, minerality, spearmint and plum. This fresh, soft, black raspberry-filled, tannic wine will benefit from a few years of age. 91-92 Pts

2011 Alcee— The debut vintage for this new Cotes de Castillon wine owned by Nicolas Thienpont.  From old vines, averaging more than 50 years on 2 hectares of clay and limestone soils, the wine is a blend of 95% Merlot and 5% Cabernet Franc.  Rich, supple-textured and silky, there is good sweetness and intensity to the wine. 89-91 Pts

2011 Balthus – This special 100% Merlot wine from the owner of Reignac was made from small yields of 27 hectoliters per hectare. At close to 14.5% alcohol, the wine offers fennel, floral, black cherry, spice and espresso bean scents. Soft and round, this black cherry-dominated wine should drink well early. 89 – 91 Pts

2011 Bord’Eaux Merlot From 100% Merlot, culled from 24 year-old vines, the wine reached 14% alcohol. Ripe black raspberry and cocoa scents, soft, lush textures and a sweet licorice- and black cherry-filled finish is a bargain at under $10.00!  85-87 Pts

2011 du Bouscat Cauduce – From a blend of 70% Merlot, 20% Cabernet Sauvignon, 5% Malbec, and 5% Cabernet Franc with vines that are an impressive 37 years of age. With good color, licorice, black cherry and vanilla, the wine is sweet, round and approachable. 87-88 Pts

2011 du Bouscat La Gargone – This tiny 3.3 hectare vineyard, situated not far from Fronsac, contains a whopping 20% Malbec, along with 60% Merlot, 18% Cabernet Franc and 2% Cabernet Sauvignon. The wine is fermented in unlined cement tanks and is aged in 95% new oak. Deep in color with vanilla, blackberry, coffee and boysenberry, the wine is rich, ripe and plush,  ending with an opulent, fruit-filled finish. 88-90 Pts

2011 du Bouscat Les Portes de l’Am The third wine from Bouscat, and the most intense, the wine is inky in color. From old vines planted in clay and limestone soil from a tiny.7 hectare vineyard, the blend consists of 50% Merlot, 25% Malbec and 25% Cabernet Franc. Licorice, truffle, mineral and black cherry scents open to an intense, ripe, opulent wine that is dense and packed with ripe, black, juicy, sweet fruit. Only 2,100 bottles are produced. 89-91 Pts

2011 Bolaire – Produced from an unusual blend of 40% Petit Verdot, 35% Merlot and 25% Cabernet Sauvignon, the goal is to move the property to an even higher percentage of Petit Verdot with hopes that the wine will eventually become an even mix of Petit Verdot andMerlot. With leaf, forest and spice, the wine is fresh and filled with crisp cassis and blackberry. 88-91 Pts.

2011 Croix Mouton From Jean Philippe Janoueix, this wine remains one of the top value Bordeaux wines from the region. Cocoa and cherry with a light strawberry finish. 85-86 Pts

2011 La Dauphine Licorice, chocolate and earthy scents with black raspberry, this wine is open and soft on the palate, finishing with jammy black cherry. This Fronsac estate is consulted by Denis Dubourdieu. 87-89 Pts

2011 Domaine de l’A Owned by renowned consultant Stephane Derenoncourt and Christine Derenoncourt, this wine is produced from a blend of 80% Merlot and 20% Cabernet Franc and reached 13.7% alcohol. Fermented in oak tanks and aged in 40% new oak, there is ample sweet oak, licorice, earth and black raspberry. With soft, round textures, this forward style of wine should drink well on release. 90-91 Pts

2011 Fougas Maldoror – Sporting a new label, this organically farmed property is currently applying for biodynamic status.  With soil that includes blue and red clay along with limestone, the wine blends 75% Merlot and 25% Merlot and will be aged in 50% new oak. Licorice, spice and black cherry with soft textures and a black cherry finish. 87-89 Pts

2010 G, Acte 3, which takes its name from the first letter of the famous owner’s last name, Jacques and Sylvie Guinaudeau,who also own Chateau Lafleur in Pomerol and the number 3, which signifies the number of vintages for the wine. Produced from a blend of 56% Merlot and 44% Cabernet Franc, this round, supple, soft-textured, black cherry-dominated wine offers a lot of early drinking charm. 89-91 Pts

2011 du Gaby Oak, smoke, red and black fruits with hints of fennel, this medium-bodied wine offers soft textures and should be enjoyable on release. The chateau has been increasing the percentage of Cabernet Franc in the blend which adds depth and structure. 86-88 Pts

2011 Gigault Cuvee Viva From 100% Merlot, the wine was whole berry fermented and aged in 33% new oak is medium bodied with a red cherry personality. 87-89 Pts

2011 Gree-Laroque is 95% Merlot with the remainder coming from Cabernet Franc. Deep ruby in color, licorice and black raspberry scents open to a supple-textured, sweet, round wine with a sweet ripe finish. 88-89Pts

2011 Jean Faux – From clay and limestone soils, this blend of 80% Merlot and 20% Cabernet Franc is aged in 50% new oak. Floral and cherry vanilla scents. Medium bodied, tannic and slightly dry in the finish. 86-88 Pts

2011 Joanin Becot – Blending 70% Merlot with 30% Cabernet Franc and grown in clay and deep limestone soils, the wine opens with licorice, earth, jam and blackberry. Sweet, ripe, round and soft-textured, the wine ends with ripe, fresh black cherry and chocolate. 88-90 Pts

2011 Lafon Fourcat – A special cuvee from this producer with licorice, stone and ripe berries, soft textures, medium body and an easy-to-like personality. 85-87 Pts

2011 LAurage – From 90% Merlot and 10% Cabernet Franc. However the goal is to slowly replace the remaining Cabernet Franc with Merlot, so that at some point in the future, the wine is 100% Merlot. The wine reached 13.5% alcohol and will be aged in 100% new oak. With jammy kirsch, herb, coffee bean and earthy notes, this medium-bodied wine ends with soft, almost overripe cherry. 88-89 Pts

2011 Lusseau From the winemaker at Chateau Pavie, the wine offers earthy kirsch scents, dense black cherries and licorice in the finish. 87-89 Pts

2011 Marjosse The home estate of Pierre Lurton, the director of Cheval Blanc and d’Yquem. Blended from 80% Merlot, 10% Cabernet Franc and 10% Cabernet Sauvignon and planted on limestone and clay terroir, the wine is aged in 30% new oak and reached 13.5% alcohol.  Cocoa, red berry and herbs with medium body and a fresh cherry finish.  This will drink well on release. 85-87 Pts

2011 Montlandrie – From 75% Merlot and 25% Cabernet Franc, planted on limestone soils and aged in 50% new oak, the wine offers oak, red berries and stone with medium body and a bright red berry finish. 85-87 Pts

2011 Petrus Gaia – The affordable Petrus, like its more expensive namesake, is mostly Merlot along with 10% Cabernet Franc.  The wine reached 14.2% alcohol. Fresh plums and cocoa scents are made better by supple textures and a forward, soft-textured personality. 87-88 Pts

2011 Le Pin Beausoleil – Made from 80% Merlot, 15% Cabernet Franc and 5% Cabernet Sauvignon, planted in clay and limestone, licorice, truffle and black cherry lead to a ripe, round, soft, open wine. 88-89 Pts

2011 La Prade – Blending 90% Merlot with 10% Cabernet Franc, the wine offers oak. Smoke and dark cherry. With a strong sense of minerality, cherry and earth, this is drying in the mouth. This wine from Nicolas Thienpont should offer pleasure after 1 or 2 years in the bottle. 88-90 Pts

2011 Puygueraud Like La Prade, both of which are made by Nicolas Theinpont, once again utilized optical sorting machines for the harvest.  Deep in color with a truffle and black cherry nose, this tannic wine is concentrated and packed with jammy black cherry and stone. 87-89 Pts

2011 Reignac From a blend of 70% Merlot, 25% Cabernet Franc and 5% Cabernet Sauvignon, the wine is deep in color. Tannins are slightly firm for this producer, while the wine offers licorice, jammy black raspberry, coffee and pepper at 14% alcohol. 88 – 90 Pts

Interestingly, this wine is shown last in the tastings after Tertre Roteboeuf. This is because the wines are presented in order of their picking dates.

2011 Domaine des Combes From 65% Merlot with 17.5% Cabernet Sauvignon and 17.5% Cabernet Franc, the wine opens with forest, earth and plum, medium body and a short black cherry finish. This is a wine to enjoy young. 85-86 Pts

2010 La Roncheraie –This tiny vineyard more than doubled its size. It’s now a whopping 3.84 hectares!  From a blend of 75% Merlot, 20% Cabernet Sauvignon and 5% Cabernet Franc, the vines are planted in a layer of thin clay over serious limestone deposits. Reaching 14% alcohol, the wine is aged in 100% new oak. With licorice, smoke and black cherry, this thick and intense wine is filled with sweet, ripe and round black cherries. This is the second vintage for this Jeffrey Davies Exclusive. 89-91 Pts.

2011 Soleil – Blending 80% Merlot, 10% Cabernet Franc and 10% Cabernet Sauvignon.  The wine was aged in 30% new oak. From limestone and clay terroir, the wine offers black raspberry jam and cocoa, soft tannins and a medium-bodied, plummy finish. This will drink well on release. 86-88 Pts

2011 Soleil Le Rival From 45 year-old vines planted on a 5-hectare bed of limestone terroir, this 90% Merlot and 10% Cabernet Franc blend reached 13.5% alcohol.   This wine is produced with the efforts of Stephan Von Neipperg. With deep color, floral, earth and kirsch aromas, luscious texture and a fresh, chocolate- and cherry-filled finish. 89-91 Pts

La Tulipe de la Garde From limestone and clay, this blend of 80% Merlot and 20% Cabernet Sauvignon is earthy, cherry filled and easy to like with a fresh cherry griotte finish. 84-86 Pts

2011 Virginie Thunevin – With an earthy black cherry nose, round textures and a supple character, this dark berry-filled wine is made in a sweet, uncomplicated, crowd-pleasing style. 87-89 Pts

2011 Vrai Canon Bouche  – From a blend of 83% Merlot, 15% Cabernet Franc and a little Malbec delivers plums, fennel and black cherries in a soft, approachable, forward style that will drink well young. 88-89 Pts