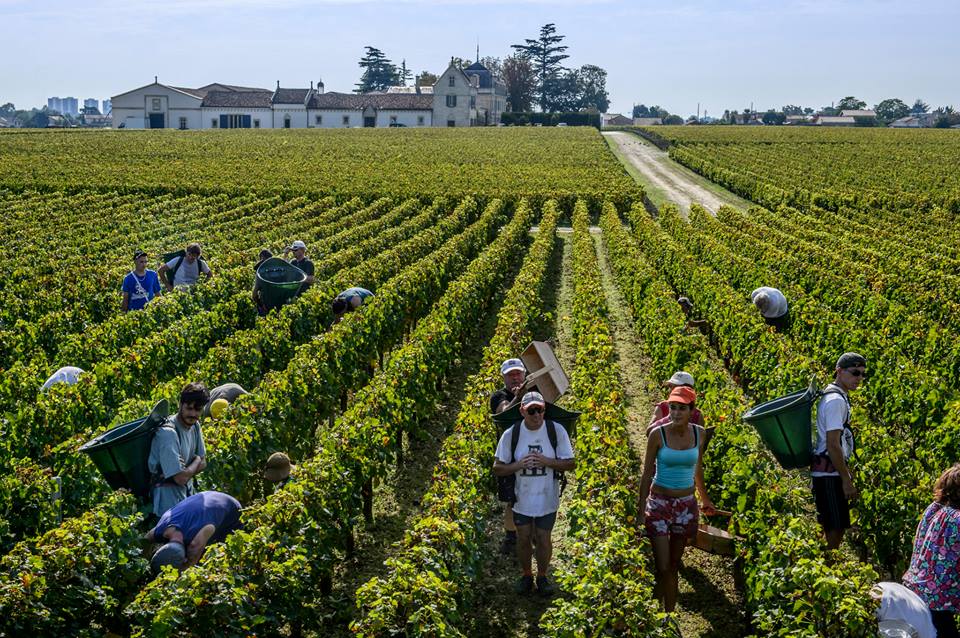 E.A Bucchaineri had the right idea when he wrote, “Same old vines, same old wine!” Once again, history repeats itself with 2013 Pessac Leognan. For three vintages in a row, the dry white Bordeaux wines from Pessac Leognan are contenders for the best wines of not only the appellation, but in all of Bordeaux.

With 2013 Pessac Leognan, it’s also important to note this is a vintage of terroir, where the best wines are truly from the top soils and have no competitors nipping closely at their heels from talented winemakers at other estates. In great years like 2009 and 2010, competition is stiff to determine the best wines of the vintage. But that is not the case with 2013 Pessac Leognan. Clearly, in this vexatious year, only the strong survived as can be seen by the results of tasting 2013 Pessac Leognan wines. For a summary and overview of the 2013 Bordeaux Campaign so far… 2013 Bordeaux Vintage and Futures Campaign Summary

2013 Bouscaut – Spicy light berries with a hint of mocha are at the core of this nice—but simple—value-priced Bordeaux wine. 83-85 Pts

2013 Branon – Coconut, espresso bean, smoke, boysenberry and jam are coupled with flashy, fleshy textures and an open, plush personality. From a blend of 50% Merlot, 25% Cabernet Sauvignon and 25% Cabernet Franc, the wine reached 13.5% alcohol with a pH of 3.7. 89-91 Pts

2013 Brown – With incense, coffee bean, licorice and plum on the nose, this enjoyable wine is easy to drink with its open personality filled with light red berries. The wine is aging in 40% new French oak. 86-88 Pts

2013 Carbonnieux –Light in aromatics and in fruit, the wine will offer its fresh cherry character early in life. 86-88 Pts

2013 Les Carmes Haut Brion – Fennel, smoke, and spicy black raspberries are easy to find in this medium-bodied, elegantly styled wine. Correctly made with a light touch, the wine is deeper and more interesting than the property produced in 2012, finishing with a round, sweet finish brimming with dark chocolate and plum. Produced from the highest percentage of Cabernet Franc in the appellation with 59% Cabernet Franc, 22% Merlot, and 19% Cabernet Sauvignon, the wine reached 13.2% alcohol. Production was way down in this vintage, with close to a total production of 1,300 cases, instead of the usual 4,200 cases. 91-93 Pts

2013 Domaine de Chevalier Rouge – Tobacco, earth, fresh red berries and a touch of oak reign on the nose, followed by medium body and user-friendly style. You should be able to enjoy this soft, elegant wine on release for its refined cocoa and cherry finish. The wine was produced from a blend of 85% Cabernet Sauvignon and 15% Merlot. 90-92 Pts

2013 Domaine de Chevalier Blanc – Mineral-driven with a blast of fresh citrus, the wine is long, keeping its citrus and stone personality tinged with fresh, lemon sensations from start to finish. 80% Sauvignon Blanc and 20% Semillon. 93-95 Pts

2013 Clos Marsalette – Interesting notes of prune, dark berry and tobacco are followed by a round textured core of licorice and plum. 87-88 Pts

2013 Clos Marsalette Blanc – Fresh, lively and packed with a floral and citrus, this wine has to be a contender for one of the best white Bordeaux value wines of the vintage. 90-92 Pts

2013 Couhins-Lurton Blanc – Medium bodied, with a grapefruit and lemon peel character, drink this fresh citrusy wine on the young side. 88-90 Pts

2013 de Fieuzal – With smoke, coffee, fennel and plum on the nose, this soft, open wine has round textures and will drink well in its youth. 88-90 Pts

2013 Haut Bailly – Licorice and black cherry griotte jumpstart the aromatic profile. Medium bodied with an uncomplicated, light style, the wine ends with a structured, firm finish with strawberry and black raspberry. From a blend of 64% Cabernet Sauvignon, 34% Merlot and 2% Cabernet Franc, the wine reached 12.8% alcohol. The wine will be aged in 55% new French oak barrels. With yields of only 20.6 hectoliters, the wine was made from 40% of the crop. According to Veronique Sanders, the key to the vinification was avoiding over-extraction while using a gentle touch following one of the estate’s most rapid picking periods. 89-91 Pts

2013 Haut Bergey – Chocolate-covered raspberries, smoke, coffee and cherry are on display in this open, forward and round wine. This will drink well on release. From a blend of 70% Cabernet Sauvignon and 30% Merlot. 88-89 Pts

2013 Haut-Brion – With a deep ruby color, the wine opens with a smoky, tobacco, earth, cassis and blackberry nose. Elegant, silky tannins, fresh cherry and cassis are on the palate and carry through to the finish. Blending 50% Merlot, 45.5% Cabernet Sauvignon, and 4.5% Cabernet Franc, the wine reached 13.1% alcohol with a pH of 3.6. From yields of 26.7 hectoliters per hectare, which represents 45% of the crop. Very little Cabernet Franc was added to the blend in 2013 because of the massive amount of rain 24 hours prior to picking. 92-94 Pts

2013 Le Clarence de Haut Brion – Medium bodied with fresh red berries and an open, spicy character, this wine will be best enjoyed on the young side. 87-89 Pts

2013 Haut Brion Blanc – With 66% Sauvignon Blanc and 34% Semillon, the wine explodes with grapefruit, honeysuckle, honeyed lemon rind, nut, floral and mineral elements in the perfume. In the mouth, the wine is dense, balanced, long and sweet with a finish that carries through from start to finish. Obscenely expensive, but if you have the money, this is a tremendous wine. 97-98 Pts

2013 LaTour Martillac – Smoke, stone and dark cherry team up with a sandy, red berry finish for a wine that will show best in its youth. Produced from blend of 60% Cabernet Sauvignon, 32% Merlot and 8% Petit Verdot. 88-90 Pts

2013 Larrivet Haut Brion – Oaky with a nutty, leafy and red berry-filled nose, the wine is medium bodied with a light red cherry finish. The wine was produced from a blend of 56% Cabernet Sauvignon, 35% Merlot and 9% Cabernet Franc. 87-88 Pts

2013 La Louviere – Light in style with an earthy, red cherry-filled personality, the wine feels rustic on the palate with sweet, tart flavors in the finish. 83-85 Pts

2013 La Mission Haut Brion – Cherry pipe tobacco, licorice, earth and spice are on the nose. With a bright, spicy and fresh personality, the wine delivers a lively, crisp and structured finish featuring cassis, pomegranate and blackberry finish. Blending 65% Merlot, 32% Cabernet Sauvignon and 3% Cabernet Franc, the wine reached 13.2% alcohol with a pH of 3.6. From yields of 33 hectoliters per hectare, the wine represents 39% of the crop. 90-93 Pts

2013 Olivier – Opening with herbal, olive-filled and leafy aromas, the medium-bodied wine has a drying, sweet and tart finish. 84-86 Pts

2013 Olivier Blanc – With a depth of fresh citrus that offers length and complexity, the wine leaves a good impression with each sniff and sip. 88-90 Pts

2013 Pape Clement – With a smoke-filled nose of earthy black cherry, coffee bean and fennel, the dark-colored (for the vintage) wine is soft, polished and sweet, but just a bit short in the fresh black raspberry finish. From a blend of 55% Cabernet Sauvignon, 40% Merlot, and 5% Cabernet Franc, the wine reached 13.5% alcohol and is aging in 70% new, French oak. Fans of pre Bernard Magrez Pape Clement should be all over this lower alcohol, less concentrated style of wine. 90-93 Pts

2013 Pape Clement Blanc – Vanilla, lemon, stone and pomelo scents are quickly followed by a plush layer of citrus rind and orange marmalade with ample lift in the finish. 92-94 Pts

2013 Smith Haut Lafitte – With a spicy dark berry, smoke, earth and tobacco personality, the wine is plush, soft and fresh, ending with sweet black raspberries. Quite nice for the vintage. 91-93 Pts

2013 Smith Haut Lafitte Blanc – With good density, freshness and length, there is a blast of fresh-squeezed lemon, lime, vanilla and grapefruit that carries through from start to finish along with the perfect amount of freshness and lift to keep the wine lively and refreshing. 94-95 Pts