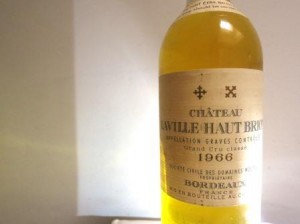 Learn everything about Chateau Laville Haut Brion, Pessac Leognan, Bordeaux with wine tasting notes and wine with food pairing tips, best vintages, a history of the property, and information on the vineyards and winemaking. If you want to read about other important, Bordeaux Chateaux: Links to all Bordeaux Wine Producer Profiles

Chateau Laville Haut Brion was planted for the production of white wine in 1923. The vines, located in the commune of Talence were originally part of the vineyard for Chateau La Tour Haut Brion.

But because the soil was considered unsuitable for red wine, due to its heavy, clay-dominated terroir, with little gravel, the Woltner family did the next best thing and planted white wine grapes. 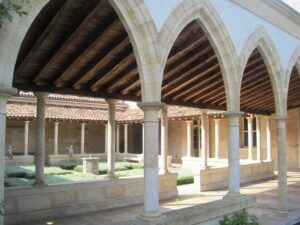 The small, 3.5 hectare parcel is planted to 70% Semillon, 27% Sauvignon Blanc and 3% Muscadelle. Muscadelle was not always used in the blend. In fact, the average blend is usually close to 79% Semillon and 21% Sauvignon Blanc. The vineyard is planted to a vine density of 10,000 vines per hectare. The vines, many of them old were on average, an impressive 51 years of age.

The vineyard is located next to Chateau La Mission Haut Brion. The terroir is gravel, clay, sand, and limestone soil.

To produce the wine of Chateau Laville Haut Brion, vinification takes place in 100% new, French oak barrels. There is no contact with the skins. There is no malolactic fermentation.

The final vintage for Laville Haut Brion was 2008. After that date, starting with the 2009 vintage, the grapes have been used to produce the white wine of La Mission Haut Brion.