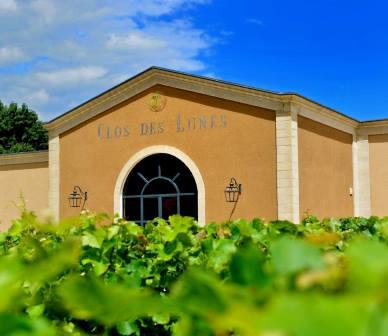 Learn everything about Clos des Lunes Bordeaux with wine tasting notes and wine with food pairing tips. Learn all the best vintages, the history of the property, and information on the vineyards and winemaking. If you want to read about other important, Bordeaux Chateaux: Links to all Bordeaux Wine Producer Profiles

Clos des Lunes made its formal debut with the 2012 vintage after the land was purchased from the Castel group. At the time of the purchase, the vineyards were 27 hectares. With additional purchases, the vineyard has increased in size to 45 hectares.

Founded by Olivier Bernard, the owner of Domaine de Chevalier in Pessac Leognan and Chateau Guiraud in Sauternes, the property previously made undistinguished, sweet wines under the name of Chateau Haut Caplane. That is no longer the case, now that Olivier Bernard and his son, Hugo Bernard began turning things around at Clos des Lunes. Today, Hugo Bernard is essentially managing Clos des Lunes.

The 45-hectare vineyard of Clos des Lunes is planted to 70% Semillon and 30% Sauvignon Blanc. The vines are old, with an average age of 30 years. The vineyard is planted to a vine density of 6,500 vines per hectare.

All work in the vineyards is organic, with the goal of moving to complete, self-sustaining, vineyard farming techniques. The terroir of Clos des Lunes is gravel with clay, sand, and limestone soil. The vineyard is close to some very good neighbors as it’s not far from Chateau d’Arche, Chateau Guiraud, and even Chateau d’Yquem.

The remainder of the wine is aged in tanks. The same team that is responsible for making the wines of Domaine de Chevalier produces the wine for Clos des Lunes.

Clos des Lunes “Lune Blanche” is the estates entry-level wine, made for early drinking. The wine is aged in a combination of stainless steel tanks and concrete vats for an average of 6 months before bottling. The wine is produced from a blend of 70% Semillon and 30% Sauvignon Blanc.

Clos des Lunes “Lune d’Argent” is a blend of 70% Semillon and 30% Sauvignon Blanc. The wine is aged in a combination of 25% new, French oak barrels while the remaining 75% is aged on its lees in stainless steel tanks for between 6 to 7 months. The property refers to this as their La Grande Cuvee’! On average, the production of this great, white Bordeaux, value wine is close to 6,500 cases per vintage.

Clos des Lunes “Lune d’Or” is a blend of 70% Semillon and 30% Sauvignon Blanc. The grapes from the estate’s oldest vines are generally close to 35 years of age or older. The terroir is gravel, with clay and limestone soils.

“Lune d’Or” is the top level of wine produced at Clos des Lunes. In fact, the owners refer to this as La Quintessence. It’s made from a barrel selection of the estates 15 best barrels. The grapes are whole bunch vinified, meaning no destemming took place.

“La Petite Lune” is the only red wine produced by the estate. From a blend of 50% Merlot, 45% Cabernet Sauvignon and 5% Cabernet Franc, the wine is sold as a generic AOC Bordeaux rouge because the production of red wine is forbidden in the Sauternes appellation.

Clos des Lunes can be enjoyed on the young side with no decanting. In fact, it is delicious and quite a treat young, even on release! However, Clos des Lunes is much better with age, so depending on the wine, and the vintage, you can age it for a few years. That is when the magic happens! So, enjoy it on any special occasion that calls for it.

Clos des Lunes is best served at 14 degrees Celsius, 57 degrees Fahrenheit. The cool, almost cellar temperature gives the wine more freshness and lift. The wine will naturally warm in the glass, while it develops more aromatic complexities and fleshes out.

Clos des Lunes can be served with seafood dishes, especially shellfish, lobster, crab, and oysters on the half shell. Foie gras is a perfect pairing with its natural sweet, salty and savory characteristics. Clos des Lunes can also be paired with roasted chicken, veal, and pork dishes that are either spicy or prepared with a touch of sweetness.