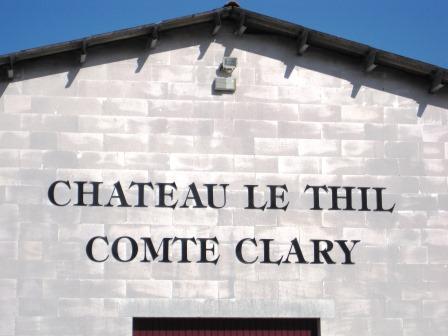 Learn everything about Chateau Le Thil Pessac Leognan with wine tasting notes and wine with food pairing tips. Learn the best vintages, a history of the property, and information on the vineyards and winemaking. If you want to read about other important, Bordeaux Chateaux: Links to all Bordeaux Wine Producer Profiles

The vineyards of Chateau Le Thil were once part of the original Smith Haut Lafitte vineyard. If you’re looking for older bottles of Chateau Le Thil, and you cannot find any, that is because for a time the wines were sold under the name of Le Desert until the late 1950’s.

During the 1970’s, the vineyard was rented to Chateau Carbonnieux. It was at that point in time, during the 1970’s that Chateau Le Thil was inherited by the de Laitre family. Jean de Laitre, began planting vines in 1990.

In 2002, at the end of their lease, the owner of Chateau Carbonnieux, Eric Perrin purchased some of the vines they had been leasing, adding them to Chateau Carbonnieux. They did not buy the name, buildings, unplanted vineyards or young vines.

Once the transaction was completed, Jean de Laitre began a serious replanting program. To avoid confusion with another estate in Bordeaux in the satellite appellations named Le Thil, he changed the name to Chateau Le Thil Comte Clary.

The 11.6 hectare vineyard of Chateau Le Thil is planted to to 70% Merlot and 30% Cabernet Franc. The Cabernet Sauvignon grapes were replaced with Cabernet Franc after the 2013 vintage.

3 hectares were previously planted to white Bordeaux wine grapes. Those vines have since been removed.

It is interesting to note that for a few years, following the removal of the Cabernet Sauvignon, Le Thil was produced using only 100% Merlot. This took place until the Cabernet Franc vines were old enough to be used in the blend. The high percentage of Merlot works here because of the amount of deep clay in the soil. The terroir is gravel, clay and limestone soils.

The vines are located not too far from Chateau Carbonnieux, Chateau Bouscaut and Chateau Smith Haut Lafitte in the commune of Martillac. The vineyard is planted to a vine density that ranges from 6,700 to 10,000 vines per hectare. The vines are on average, 20 years of age.

One of the little known facts about their vineyard is that here you find the remains of the ancient Romans who cultivated the vineyards over 2,000 years ago. If you like antiquities, it’s well worth a walk in the vines here.

To produce the red wine of Chateau Le Thil, vinification takes place in temperature controlled, stainless steel tanks with a 28-day maceration. A portion of the Merlot undergoes its malolactic fermentation in 100% new, French oak barrels and spends three weeks on its lees before racking.

Starting with the 2006 vintage, Chateau Le Thil started making wines and selling them at prices that make them one of the best value wines in Bordeaux today.

Chateau Le Thil can be enjoyed on the young side with decanting. Young vintages can be decanted for an average of 1 hour, give or take. This allows the wine to soften and open its perfume. Older vintages might need very little decanting, just enough to remove the sediment.

Chateau Le Thil is usually better with at least 4-6 years of bottle age. Of course that can vary slightly, depending on the vintage character. Chateau Le Thil offers its best drinking and should reach peak maturity between 6-15 years of age after the vintage.

Chateau Le Thil is a perfect match with Asian dishes, hearty fish courses like tuna, mushrooms and pasta as well as cheese.