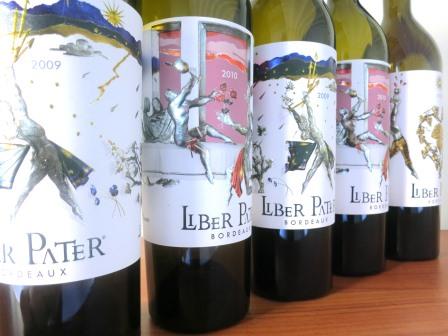 Learn everything about Liber Pater Graves, Bordeaux with wine tasting notes and wine with food pairing tips. Learn all the best vintages, a history of the property and information on the vineyards and winemaking. If you want to read about other important, Bordeaux Chateaux: Links to all Bordeaux Wine Producer Profiles

A lot has been written about Liber Pater and its owner Loic Pasquet. To explain this succinctly, Loic Pasquet wants to show what Bordeaux wine tasted like at the time of the original classification and pre Phylloxera. To do this, he using old vines and ungrafted rootstock in sand with gravel soils.

At Liber Pater, they also use grape varieties in small amounts that were in use in Bordeaux in those days but are not currently allowed by INAO rules. The vineyard is planted in some places at a high vine density of up to 20,000 vines per hectare and the yields are kept low.

The entire vineyard is farmed by the owner and a mule. Loic Pasquet also uses a plow that is more than 150 years old. I have been there and seen it used in the vineyards.

So, while many things are different, including the use of 100% new, French oak barrels, selection, malolactic fermentation in barrels, and other modern techniques when you taste the wine of Liber Pater, this is about as close as you are going to get to wines produced in the 19th century, albeit with a modern twist.

Liber Pater takes its name from an ancient Roman God that was associated with Bacchus. Liber Pater was considered the God of vines, wine, abundance, and even fertility. The estate produces three wines, a red wine, a white wine, and a sweet, white dessert wine.

Loic Pasquet purchased Liber Pater in 2005. His first vintage that was under his control was 2006. Loic Pasquet has a spare no expense attitude to producing the best wine possible from his tiny Bordeaux wine vineyard in the Graves appellation.

Within a few years, Loic Pasquet was clearly producing a wine that far exceeded what anyone was doing in the appellation.

The wine of Liber Pater began to be in such high demand that single bottles were selling for as much as 2,000 Euros per bottle. In January 2016 Loic Pasquet ended a long-running dispute with the French Administration and the European Community over monies provided for agricultural promotion.

The monies were returned along with a small fine. The only other change was that as of 2015, the wines were only allowed to be sold as a VDP, instead of the Graves appellation. That is not going to change the ability of Liber Pater to sell in the marketplace.

The vineyard actually dates to ancient Roman times. It is planted at a high vine density of 20,000 vines per hectare. The vines are old, with an average age of 40 years.

The vines of Liber Pater are propagated from a selection massale of the property’s own pre-phylloxera, ungrafted rootstock. Liber Pater is one of the first estates in Bordeaux to begin planting grapes that were popular in the pre-phylloxera era, Castet, Marselan, and Tarney Coulant. Those ancient varieties were added to the red blend starting with the 2015 vintage.

The terroir of Liber Pater is mostly gravel with mineral deposits. The Liber Pater vineyard is organically farmed with all mechanical plowing done exclusively with horses. Harvesting is manual. The net yields are often the lowest in the entire Bordeaux appellation. In 2009, they were just 15 hectoliters per hectare. In 2010 and 2011, the yields were even lower at only 10 hectoliters per hectare! In 2015, it was even less!

Previously, to produce the wine Liber Pater they used micro vinification techniques. Fermentation took place in 100% new, French oak barrels from Cadus (50%) and Remond (50%). The maceration time is usually long. As an example, with the 2009 vintage, the maceration ran 60 days. That is no longer the case today.

With the 2018 vintage, Loic Pasquet, in an effort to present the fruit as naturally as possible stopped aging the wine in oak. Instead, Liber Pater shifted to using the only amphora to age the wine. Due to climatic conditions and the search for producing the best wine possible, about 100 bottles were produced of their 2018 wine.

Malolactic fermentation takes place in barrels where the new wine spends an estimated 18 months on its lees that will be stirred regularly. Only 2,400 bottles are produced per vintage of the red wine of Liber Pater. As you can see, much of the work in their Bordeaux vineyard work is done by hand, by the owner, Loic Pasquet, with the help of a Spanish mule.

Prices increased with the sudden drop in volume, making Liber Pater the most expensive in the world on release. Single bottles will set you back about 30,000 Euros if you want to own them! But it is not easy to find as only 200 bottles were produced. 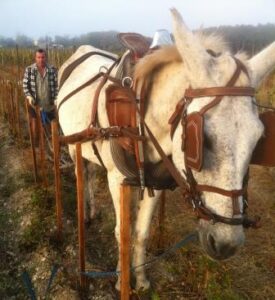 Like what they did with the red grapevines, all the vines are propagated from a selection massal of the property’s own pre-phylloxera, ungrafted rootstock. The yields for the white wine of Liber Pater are insanely low.

Liber Pater Blanc is a very labor-intensive wine to produce. Previously, the fruit was pressed under the protection of a blanket of CO2. Fermentation took place exclusively in 100% new, French oak barrels from Remond. But things at Liber Pater are always changing.

The wine is aged on its lees for an average of 16 months with regular stirring. Only 300 bottles of this hard-to-find, white Bordeaux wine are produced in an average vintage.

At Liber Pater, Loic Pasquet is always experimenting. You can expect to see 2 new wines added to their portfolio in the years to come when they release wines under the name of Liberi Bellaria from 100% Castets and Mancin.

Liber Pater is much better with age and decanting. Young vintages can be decanted for an average of 1-3 hours, give or take. This allows the wine to soften and open its perfume. Older vintages might need very little decanting, just enough to remove the sediment.

Liber Pater is usually better with at least 7-10 years of bottle age. Of course, that can vary slightly, depending on the vintage character. Liber Pater offers its best drinking and should reach peak maturity between 9-25 years of age after the vintage.

Loic Pasquet and Liber Pater have a commitment to producing the best Bordeaux wine possible. That commitment is so strong, for the 2012 vintage, Liber Pater declassified their entire harvest! They produced no red, white, or dessert wine that year. For a chateau of this size to declassify an entire year’s crop is unheard of.

Proving even more of a commitment to only making and selling wine they feel deserves to be called Liber Pater, they once again declassified their entire crop in 2013 and 2017.

To further illustrate their commitment to quality, even with their tiny production, Liber Pater produces a second wine in select vintages, Clos de Landiras. Liber Pater also produces an entry-level wine, Denarius. Liber Pater Denarius is available in both red and white wines.

Liber Pater takes everything seriously, including their label art, which they change every year. Liber Pater is one of the most expensive wines in all of Bordeaux. Single bottles sell for over $3,500 per bottle in some markets.