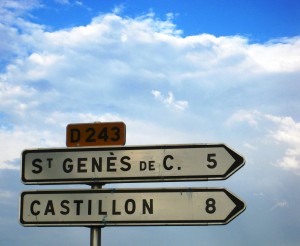 The 2010 Bordeaux wine futures campaign is off to a slow start.  No one really knows why.  Possible reasons why range from judging the world market demand, economic issues or the desire to wait as this is a Vinexpo year when the world’s largest wine and spirits fair is held in Bordeaux.

While most 2010 Bordeaux wines have not been priced and offered for sale yet, it is a safe bet to assume that many of the years best values are going to come from the satellite appellations like Cotes de Castillon, Fronsac, Lalade de Pomerol, Bordeaux Superieur and other appellations are covered in this article. These wines are delicious and would fare well in a blind tasting with far Bordeaux wine that cost a lot more money! They will also be enjoyable to drink young as many do not require cellaring.

Once all the classified wines and chateau better known for values from St. Emilion and Pomerol have been priced and offered for sale, we’ll publish a follow up article with a list of the top 2010 Bordeaux wines that match price with quality.

The following 2010 Bordeaux Wine Value wines were tasted during my visit to Bordeaux in April.

2010 20 Mille is produced from a 1.4-hectare section of the Croix Mouton vineyard planted to 100% Merlot. This Bordeaux wine reached 14.9% alcohol in this vintage. The wine takes its name from the fact it’s planted to 20,000 vines per ha. According to the owner, Jean-Philippe Janoueix, the purpose of this density of planting, is to show quality Bordeaux can be produced from terroir that is not only found in the top appellations. Black cherry, chocolate and licorice aromas couple with sweet, round textures, concentration and depth. As the vineyards continue aging, the wine keeps getting better. 89-91 Pts

2010 d’Aiguilhe – This 50-hectare Bordeaux wine vineyard produced with a typical blend for the Cotes de Castillon appellation, 80% Merlot and 20% Cabernet Franc is aged in 50% new oak. Dark, purple ruby in color, with a perfume of licorice, jammy dark berries and oak, the wine is round in texture and is filled with delicious ripe black and red fruits, chocolate and spicy, fresh berries. 90-92 Pts

2010 Beausejour Montagne 1901, produced from vines planted in 1901 is stuffed with ripe jammy berries, licorice and spice. Not much of this Bordeaux wine is produced, but it’s worth seeking out as it’s made from old vines that were planted over 110 years ago! Stephane Derenoncourt consults. 89-91 Pts

2010 Bolaire Produced from an unusual blend of 40% Petit Verdot, 35% Merlot and 25% Cabernet Sauvignon, the goal is to move the property to an even higher percentage of Petit Verdot with the hopes the wine will eventually become an even mix of Petit Verdot and Merlot. With wood, black raspberry, cassis and flower scents, this medium bodied wine offers a lot of freshness, spice and cassis ending with hints of pepper and slightly green tints in the finish. 86-89 Pts

2010 Cap de Faugeres From a blend of 85% merlot, 10% cabernet franc and 5% cabernet sauvignon, (which is how the vineyard is planted,) came in at 14.5% alcohol. This medium/full bodied Cotes de Castillon wine offers abundant fresh, sweet black cherry and chocolate notes in a lush crowd pleasing style that will drink well on release for a fair price. As 10,000 cases of this Bordeaux wine are produced, this will also be easy to find. 89-91 Pts

2010 Croix Mouton from Jean Philippe Janoueix remains one of the top value Bordeaux wines from the region. From a blend of 87% Merlot, 12% Cabernet Franc and a drop of Petit Verdot. Oak, black raspberries, medium bodied, round, mocha and cherry finish. This Bordeaux wine drink well on release. 87-88 Pts

2010 La Dauphine From a blend of 90% Merlot and 10% Cabernet Franc, this deeply colored wine starts with aromas of oak, licorice, floral, chocolate and dark berry scents. On the palate this round textured wine finishes with ample, sweet ripe black cherry flavors. 2010 La Dauphine was aged in 30% new oak for 12 months. This Fronsac estate is consulted by Denis Dubourdieu 89-90 Pts

2010 G From a blend of 56% Merlot and 44% Cabernet Franc, the wine offers earthy, truffle, forest floor and dark berries. Medium bodied and soft in texture, the finish is filled with dark cherries and coca powder. 90-91 Pts

2010 Grand Village 75% Merlot 25% Cabernet Franc create an earth, candied plum and sweet black cherry scented wine with a medium body that ends with a fresh cherry finish. This should drink well on release. 89-91

2010 Les Grands Marechaux This is another contender for one of top values in Bordeaux wine with its supple textures and fresh cassis, licorice and black cherry profile. 87-89 Pts

2010 Gree-Laroque is mostly Merlot with the remainder coming from Cabernet Franc. Licorice, smoke and cassis, round textures and a finish of black cherry and cassis make this one of the top value Bordeaux wines from the vintage. 88-90 Pts

2010 Goulee 80% Cabernet Sauvignon and 20% Merlot combine to produce a wine that opens with a spicy profile filled with coffee, fresh, ripe dark berries and licorice. Concentrated ripe, round berries, fresh cassis and bitter chocolate are found in the finish of this lush, styled Bordeaux wine from the team at Chateau Cos d’Estournel. 90-92 Pts

2010 Lusseau From the winemaker at Chateau Pavie, this blend of 75% Merlot 25% Cabernet Franc is filled with licorice, oak and jammy dark berries and ends with a medium bodied, ripe, fennel infused, cherry finish. 89-91 Pts

2010 La Prade is filled with cassis, black cherry and licorice. Concentrated, and easy to like, this wine from Nicolas Thienpont should offer pleasure early. 88-90 Pts

2010 Puygueraud, like La Prade, both of which are made by Nicolas Theinpont, once again utilized optical sorting machines for the harvest. Produced from a blend of 80% Merlot, 15% Cabernet Franc and 5% Malbec, this full bodied wine is stuffed with licorice, cassis, smoke and dark cherries. 87-89 Pts

2010 Reignac opens with oak, espresso bean, jammy black fruit and cassis, Round, supple and packed with jammy ripe fruit, this should offer pleasure on release. 88-90 Pts.

2010 La Riviere Aria was a discovery for me. Thank you to to Bill Blatch from Vintex for introducing me to it. It was the first time I had tasted this wine. Froma blend of 86% merlot, 12% Cabernet Franc and the rest Cabernet Sauvignon, with vines averaging 40 years of age, the wine sported a deep color. Floral, boysenberry aromas, a rich mouth full of ripe, black fruit, chocolate and boysenberry jam makes this a very tasty offering from Fronsac. I’m not sure what this costs yet, but chances are, this will be a good value wine to seek out. 90-92 Pts

2010 La Roncheraie From a small 1.4 hectare vineyard, the wine is made from 100% Merlot that average 30 years in age. Inky in color, with an oak, licorice and jammy berry perfume. Dense, thick and mouth coating, this wine exchanges complexity for hedonistic pleasure. Less than 300 cases of this Bordeaux wine are produced. 89-91 Pts

2010 Soleil 80% Merlot, 10% Cabernet Franc, 10% Cabernet Sauvignon was used to create a wine with licorice, jammy black fruit and cassis with a milk chocolate covered, cassis finish. This wine is produced with the efforts of Stephan Von Neipperg. 86-88 Pts

2010 Soleil Le Rival From 45 year old vines planted on a bed of limestone terroir, this 90% Merlot and 10% Cabernet Franc blend offers a complex perfume of truffle, earth, blackberry and stone aromas. Concentrated with intense dark cherries and chocolate, the wine ends with a long, fresh, mineral, cassis and cherry finish. This wine is produced with the efforts of Stephan Von Neipperg. 90-92 Pts

2010 Vieille Cure Opaque in color, black licorice, dark chocolate, oak, jammy berries and sweet black cherry flavors are coupled with a big blast of concentrated, sweet jammy berries. This is the best wine produced by La Vieille Cure since the 2005 and a strong contender for the top value 2010 Bordeaux wine of the vintage. 90-93 Pts