Chateau Beychevelle, due to the classic architecture of the chateau and the gardens is often referred to as the “Versailles of the Médoc”. The history of the Bordeaux wine chateau dates back the French King, Henri III. In 1565, Bishop François de Foix-Candale constructed the château. At the time Beychevelle was the property of the Dukes of Epernon.

To understand the Duke’s power, it’s important to note that all the ships sailing in front of theBordeaux wine property were forced to lower their sails. This was seen as a sign of respect. In fact, this that is where the chateau took its name. Beychevelle can be translated to Baisse Voile, which means lower the sails.

In 1644 Bernard de Nogaret de la Valette built the central part of the chateau and consolidated the vineyard. Etienne-François de Brassier, inherited the property in 1717. He was a noted Bordeaux wine lover in his day who replanted the vineyard and rebuilt the Beychevelle Port. 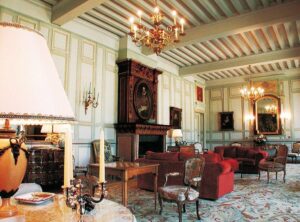 In 1825, the estae was bought by Pierre-François Guestier. Guestier was a popular Bordeaux wine merchant, and the mayor of Saint-Julien. Guestier strove to rebuild the reputation that Beychevelle earned at the start of the century. His efforts made sure the chateau was included in the 1855 Classification. In 1875, Armand Heine, cousin of the famous German poet, Heinrich Heine purchased the Bordeaux wine estate. Heine built the château’s north wing and replanted the vineyard after the phylloxera epidemic.

After Armand Heine died in 1883, Marie-Amélie Kohn, his wife from Louisiana, managed the property. The chateau continued to be managed by family members for the next several generations. After the close of World War 2, a new team of workers were hired. They were consulted by the noted professor, Emile Peynaud. 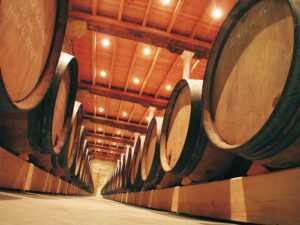 In 1970, Aymar Achille-Fould took over the property. Following Professor Peynaud’s advice, he created a second Bordeaux wine in 1974, Admiral de Beychevelle. The huge cost of running the Medoc estate prompted him to look for a business partner to invest in Beychevelle. In 1984, the GMF group took a minority shareholding in the château. In 1988, the GMF group joined forces with the Japanese Suntory company and formed a new business called Grands Millesimes de France. In February, 2011, Chateau Beychevelle was sold to a partnership consisting of Pierre Castel and the large Japanese beverage company Suntory.

Château Beychevelle’s emblem, a ship with a griffon figurehead and a lowered sail, was sculpted in bronze in 1989 by Roberto Gnozzi, Professor at the Rome Academy of Fine Arts. The figurehead is especially appropriate as, according to Greek mythology, a griffon was the guardian of Dionysos’ wine goblet.

The Chateau Beychevelle vineyard cover 90 hectares. They are planted on deep, gravel based soils. The terroir is made up of mostly deep Garonne gravel. The vineyard is planted with 62% Cabernet Sauvignon,31% Merlotm 5% Cabernet Franc and 2% Petit Verdot. The wine remains in barrel for 18 months, of which 50% is new oak. This is a traditionally made and traditionally styled Bordeaux wine full of cassis, earth, spice and tobacco notes that ages well.