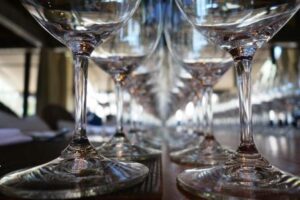 The 2014 Chateauneuf du Pape harvest is in full bloom. Growers are picking all over the Southern Rhone Valley. The conditions for picking have been good so far. It’s been sunny and warm until recently in Chateauneuf du Pape. Some rain started to fall which turned into a minor rain storm as gorwoers were close to finishing their harvest. It looks like temperatures are going to drop a bit over the next few days. On the positive side, one thing we know for certain is growers will have a lot more wine with the 2014 vintage. 2014 could be the biggest cropfor the region since 2007. After 2013, this is welcome news. But, as the old saying goes, it’s not over until it’s over. And it ain’t over yet! In other words, it’s far too soon to discuss the 2014 vintage as the grapes have not even fully arrived at the cellars. While it’s too early to know much about 2014, it’s not too early to talk about the recently bottled 2012 Chateauenuf du Pape wines I tasted in late June.

Drinking wine is fun. Tasting wine is almost as much fun. But trust me on this, tasting a single vintage in one day is a lot of work. It’s taxing on your palate and concentration. Often, it’s the surprises encountered during the tasting that keep you awake and focused becuase those wines really stand out. I really like the style of 2012 Chateauneuf du Pape wines with thier freshness, clean, silky fruits and forward personality. Some domaines were not as successful as I had hoped. Others made strong wines and a vew producers turned out sublilme efforts.

The following 2012 Chateauneuf du Pape wines were tasted in June during a visit to the region.

2012 3 Cellier Eternelle – A hint of wood, kirsch and spice are coupled with silky textures and the essence of fresh, sweet cherries. The wine was produced from 100% old vine Grenache. 92 Pts

2012 3 Cellier Cuvee Privilege – Produced from a blend of 54% Syrah, 29% Grenache, 11% Counoise, 4% Mourvedre and 2% Vaccarese, the wine reached 15% alcohol. Medium bodied, silky and smooth, the freshness in the red berries and soft textures carries through. 90 Pts

2012 Bastide Saint Dominique Les Hesperides – Finesse driven in style, showing sweet fruits with a solid depth of flavor in the red berry dominated wine. Produced from a 50/50 blend of Mourvedre and Grenache. 91 Pts

2012 Beaurenard Boisrenard – Burnt wood, spice, incense and kirsch notes create the nose. The soft, round fruits and crisp, smoky berries on the palate make it even better. While the blend is mostly Grenache, the wine features various amounts of all 13 varietals. 93 Pts

2012 Berthet Rayne Cadiac – With a mineral driven core of fruit, the wine is fresh, expansive and rich in texture. 90 Pts

2012 Bosquet des Papes A la Gloire de mon Grand-Pere – With a good depth of plum and kirsch on the mid palate, the spicy finish follows through. From mostly old vine Grenache, 2% Cinsault was added in for good measure. 93 pts

2012 La Celestiere La Croze – Fresh and fleshy, with a sweetness to the dark, peppery red fruits, the wine lingers and refreshes. Made from 100% old vine Grenache, the wine reached 15% alcohol. 90 Pts

2012 La Celestiere Les Domaines – Polished and peppery, the fruit is deep, sweet, ripe, spicy and rich. The wine was produced from a blend of 70% Grenache and 30% Mourvedre. 91 Pts

2012 Cellier des Princes Les Hauts des Coteaux – Medium bodied and easy to like, the wine was made in a soft, early drinking, open, finesse style. This is the top wine from the Chateauneuf du Pape cooperative. 88 pts

2012 Clos du Caillou Les Safres – Lots of ripe, round textured, peppery, black raspberries, kirsch and spice are found from start to finish in this rich wine. With Grenache making up most of the blend, 2% Cinsault, 2% Syrah and 1% were added for good measure. 91 Pts

2012 Clos du Caillou Les Quartz – With freshness in its character, the ripe, red and juicy black fruits stand out with their spicy qualities and polished textures. There is no sensation of heat in the 15.5% alcohol finish. The wine was produced from a blend of 85% Grenache and 15% Syrah. 93 Pts

2012 Clos du Caillou Reserve – There is a purity of fruit that leaves a long impression here. This is made even better with the freshness, length and silky tannins that push along the spice and ripe berry driven finish. This will be fun to age. The blend of 60% old vine Grenache and 40% Mourvedre reached 16% alcohol with no sensation of heat. 95 Pts

2012 Clos du Mont Olivet Cuvee du Papet – Charming in every way, the fruit has a polished texture and freshness that never seems to dissipate or lose its fresh, lush qualities. Produced from a blend of 75% old vine Grenache, 15% Mourvedre and 10% Syrah, the wine reached 15% alcohol. 93 Pts

2012 Charbonniere Vieilles Vignes – Supple, soft fruits with intensity and depth, sweet, ripe tannins and a spicy, lush character in finish. From a blend of 90% Grenache and 10% Mourvedre, the wine reached 15.5% alcohol. 93 pts

2012 Eddie Feraud Cuvee Les Raisins Bleus – Supple, clean and fresh, there is a sweetness in the ripe kirsch and licorice finish that stands out. With 95% old vine Grenache and the remainder of the wine coming from different varieties, the wine reached 15% alcohol. 91 Pts

2012 Fontavin Terre d’Ancetres – Medium bodied, spicy red fruits and good freshness are found in this forward styled wine that was produced from a blend of 85% Grenache and 15% Syrah. 90 Pts

2012 Fontavin David et Goliath – There is a blast of oak in the nose that is made better by the lusty, plush, supple fruits on the palate that was produced from a blend of 95% Grenache and 5% Syrah. 91 Pts

2012 Font de Michelle Elegance de Jeanne – From 100% old vine Grenache, the wine is balanced and elegant, with soft, layers of ripe red berries that shine through. This is very sweet and refined. 92 Pts

2012 Grand Tinel Alexis Establet – Refined, polished and silky, with freshness in its kirsch core that really stands out in the finish. Made from 100% old vine Grenache. 92 Pts

2012 Giraud Les Grenaches de Pierre – Silky, clean and pure, the fresh peppery kirsch notes of the 100% old vine Grenache expand in the lush textured, pure finish. One of the stars of the vintage. 95 Pts

2012 Janasse Chaupin – Silky, polished and fresh, the fruit is sweet, ripe and supple in texture, with a vibrant quality. Made from 100% old vine Grenache, the wine reached 15.5% alcohol. 94 Pts

2012 Janasse Vieilles Vignes – With a serious depth of flavor, the wine is rich, long and deep, finishing with layers of ripe, sensuous, peppery, sweet black raspberries and pepper. This is a very good wine in any vintage, but it’s a real superstar in 2012! From a blend of 80% Grenache, 10% Mourvedre and 10% Syrah, the wine reached 15.5% alcohol. 96 Pts

2012 Juliette AvrilCuvee Maxence – Medium bodied and all about its sweet, fresh, kirsch quality and silky textures in the forward finish. Produced from 100% Grenache. 90 Pts

2012 L’Or de Line Cuvee Paule Courtil – Silky, lush and long, there is sweetness and depth of flavor in the ripe, spicy fruit filled core. From a blend of 60% Grenache and 40% Mourvedre, the wine reached 15% alcohol. 91 Pts

2012 Marcoux Vieilles Vignes – Purity and elegance are seldom paired together as well as this. The fruit is ripe, sweet and fresh, with the right amount of spicy tannins in the mix. This stellar wine was produced from 100% old vine Grenache which reached 15% alcohol. 96 Pts

2012 Mas Saint Louis Louis Arpents des Contrebandiers – With a good depth of color, the spicy, kirsch filled wine is complicated by licorice, pepper and plum in the finish. 91 Pts

2012 Mathieu Marquis Anselme – Supple and polished, the wine is rich, soft and velvety in texture. With 85% old vine Grenache, 8% Mourvedre and the remainder of the wine coming from a field blend of different grape varieties, the wine reached 15% alcohol. 90 Pts

2012 Maucoil Esprit de Maucoil – Silky, fleshy, sweet and long, there is a nice quality to the melange of kirsch and dark red berries in the wine. 91 Pts

2012 La Nerthe Cuvee des Cadettes – Oaky, supple and rich, there is good sweetness, flesh and charm in the modern styled, lush, polished, smoky fruit. This should be better once the oak integrates. Produced from a blend of 39% Syrah, 37% Grenache and 22% Mourvedre. 91 Pts

2012 Ogier Heritages – Plush and polished, there is a wealth of sweet, ripe berries and jam in every sip and swallow. Blending 80% Grenache, 10% Syrah, 5% Mourvedre and 5% Cinsualt, the wine reached 15% alcohol. 91 Pts

2012 Solitude Barberini – Long, fresh, spicy, ripe and sensuous, with depth a flavor on the long finish. Slightly modern in style, but I liked it. 90 Pts

2012 La Tour Saint Michel Feminessance – Deep in color, with a touch of wood and ripe dark berries, creates a fleshy, sexy, plush, concentrated wine that lingers in the finish. From 60% Grenache and 40% Syrah, the wine reached 15.5% alcohol with no touch of heat. 93 Pts

2012 Raymond Usseglio La Part des Anges – Deep in color to match the depth of flavor, this rich, concentrated wine is packed with supple, ripe and super ripe black cherries. From a Mourvedre dominated blend, the remaining 30% is made from 20% Grenache and 10% Syrah. 94 Pts

2012 Vaudieu Amiral G – Earthy in character, the wine is all about the sweet, soft and spicy, fresh core of fruit and licorice. With lusty textures and layers of sweet fruits, the wine is long, clean and fresh. This 100% old vine Grenache based wine will be better with a few years of age. 93 Pts

2012 Vieille Julienne Reserve – Deep in color, with a floral, earthy, dark red berry perfume. Elegant in style, with a long, fresh, ripe finish that brings its plumy notes all the way through from start to finish. This is a compelling example of Chateauneuf du Pape that has to be a contender for the wine of the vintage. 97 Pts