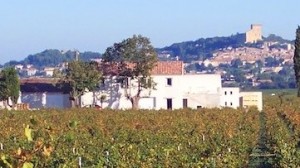 Learn everything about Mas Saint Louis Chateauneuf du Pape with wine tasting notes, wine and food pairing tips, best vintages, a history of the property and information on the vineyards and winemaking. If you want to read about other important wineries and wine makers from the Rhone valley: Links to all Rhone Valley Wine Producer Profiles

The creation of Mas Saint Louis dates back to the late 1800’s. It was purchased by Jean-Louis Geniest in 1909. Jean-Louis Geniest was already well acquainted with the wine business at the time, as he owned a successful cooperage.

It was Jean-Louis Geniest who built the original concrete vats. Some of those early concrete tanks are still in use today. The Geniest family still owns and manages the estate today.

However, the estate previously sold their production to negociants. Those contracts expired with the 2011 vintage and they have not looked back since.

Mas Saint Louis owns 30 hectares of vines planted in Chateauneuf du Pape. Most of their Southern Rhone terroir is made up of sand and rock strewn soils. The vineyard is planted to 80% old vine with varying amounts of Syrah, Mourvedre, Cinsault, Counoise, Picpoul, Bourboulenc and other assorted field blends planted in the vineyards.

Mas Saint Louis is one of the few Chateauneuf du Pape vineyards planted in a single block of vines. This is almost unique as most vineyards in the appellation are spread out in different lieux-dits all over the region.

Mas Saint Louis Chateauneuf du Pape Tradition is produced from 80% Grenache, 10% Mourvedre, 5% Syrah and 5% Cinsault. Although a small percentage of other grape varieties could also be in the blend from time to time.

The terroir is rocks, stones and sand in the la Crousroute lieu-dit. The wine is vinified in old cement tanks and aged in a combination of foudres and tank for 12 months before bottling.

Mas Saint Louis Les Arpents des Contrebandiers is produced from 75% Grenache, 10% Mourvedre, 10% Syrah and 5% Cinsault. The terroir is rocks, stones and sand in the la Crousroute vineyard. The wine is vinified cement vats and aged in both demi-muids and tank for 12 months.

Mas Saint Louis Grande Reserve comes from a blend of 80% Grenache and 20% Mourvedre. The terroir is rocks, stones and sand in the la Crousroute lieu-dit. The wine is vinified in cement tanks. The aging takes place in demi-muids for an average of 12 months before the wine is bottled.

Mas Saint Louis Blanc comes from a blend of 85% Grenache Blanc 10% Clairette and 5% Roussanne. The wine is vinified and aged in 80% stainless steel vats and 20% in French oak barrels. They are now also producing a Rose’.

Mas Saint Louis can be enjoyed on the young side. Young vintages can be popped and poured, or decanted for about 1 hour, give or take. This allows the wine to soften and open its perfume. Older vintages might need very little decanting, just enough to remove the sediment.

Mas Saint Louis is usually better with 1-3 years of bottle age. Of course that can vary slightly, depending on the vintage. In the best vintages the wine should be consumed within 2-8 years after the vintage.