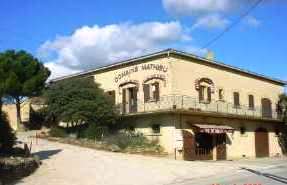 Learn everything about Domaine Andre Mathieu Chateauneuf du Pape, with wine tasting notes, wine, and food pairing tips, best vintages a history of the property, information on the vineyards, and winemaking. If you want to read about other important wineries and winemakers from the Rhone valley: Links to all Rhone Valley Wine Producer Profiles

The owners of Domaine Andre Mathieu have quite a long history in the Chateauneuf du Pape appellation. In fact, they date their family all the way back to some point in time close to 1600.

The birth of Domaine Mathieu took place in 1854 when it was founded by Anselme Mathieu. At the time the wines were sold under the name of Felibre. Domaine Andre Mathieu is located in Courthezon.

The modern era for Domaine Mathieu starts in 1980 when the family began to modernize the estate and its winemaking. Instead of having all their tanks in the middle of their home, they created a new winery. The estate was managed by the two brothers, Andre Mathieu and Jerome Mathieu.

Following the departure of Jerome Mathieu, who went on to found Domaine de Saje, starting with the 2014 vintage, the estate changed its name to Domaine Andre Mathieu, as Andre Mathieu was now solely in charge of the Domaine. Andre Mathieu is ably assisted by his daughter, Coralie Mathieu.

While it is common for most producers in the Southern Rhone Valley to own vines that are scattered across the appellation, Domaine Mathieu is spread out more than most. Their 20.2 hectares of vines are divided into 60 different parcels.

Of course, as you can imagine, that diverse array of parcels is interesting to work with, because of the various types of terroir, soil, harvest dates, picking conditions, and because they have plantings of all 13 allowable grape varieties.

Domaine Andre Mathieu Chateauneuf du Pape – 85% old vine Grenache, 6% Mourvedre, and the remainder of the blend is basically a field blend of all 13 allowable grapes planted in the appellation. The terroir is a mix of galets, sand, and limestone. Some of the grapes are destemmed.

The wine is aged in old foudres, demi-muids, and a small amount of used French oak barrels for between 12-14 months. 2,200 cases are produced.

Domaine Andre Mathieu La Centenaire is produced from the oldest vines from the estate. The vines used for this Cuvee, date back more than 100 years! While the blend is mostly old vine Grenache, all 13 different grape varieties are also included.

Domaine Andre Mathieu La Centenaire is made from a blend of almost 90% old vine Grenache from vines that are over 120 years of age!

The terroir is rocks and sand soils. The vineyards date back to plantings that took place in 1890 and 1892 in the La Font du Pape lieu-dit and Barbe d’Asne lieu-dit. The remaining 10% of the blend comes from a field blend of different grape varietals.

The wine is aged in a combination of the estate’s oldest foudres and French oak barrels for 14 to 16 months before bottling. This Special Cuvee is only made in the best vintages. 500 cases are produced each vintage.

Domaine Andre Mathieu Vin di Felibre is a hommage to the estates formative years. Felibre is the name the property first sold its wines under. The wine is made from a blend of 80% Mourvedre, 10% Grenache, and all the other various, allowable other varieties.

Domaine Mathieu Cuvee Marquis Anselme Rouge – Produced from the estates oldest vines, planted at the start of the 20th century, the wine is made from to 90% Grenache, with the remainder of the blend coming from all 13 of the other allowable, assorted, red wine grape varieties.

This Special Cuvee is only made in the best vintages. This wine is no longer being made. It has been replaced by La Centenaire, starting with the 2014 vintage.

Domaine Andre Mathieu Vin Di Felibre Vin Di Felibre is one of the few wines made from 100% Clairette. Not much is made with a production that averages about 2 barrels of wine, or just under 50 cases of wine per vintage. This wine was previously produced and sold under the name of Domaine Mathieu Marquis Anselme Blanc.

Domaine Andre Mathieu can be enjoyed on the young side. Young vintages can be popped and poured, or decanted for an hour so. This allows the wine to soften and open its perfume. Older vintages might need very little decanting, just enough to remove the sediment.

Domaine Andre Mathieu is usually better with 2-5 years of bottle age. Of course, that can vary slightly, depending on the vintage. In the best vintages, the wine should be consumed within 8-12 years after the vintage.

The white wine of Andre Mathieu is best served with a myriad of different seafood dishes, shellfish, crab, lobster, sushi, sashimi, chicken, pork, and veal, as well as Asian cuisine.