Learn everything about Domaine de Cristia Chateauneuf du Pape with wine tasting notes, wine and food pairing tips, best vintages, a history of the property, information on wine making and terroir, along with wine tasting reviews and images. If you want to read about other important wineries and wine makers from the Rhone valley: Links to all Rhone Valley Wine Producer Profiles

Domaine de Cristia came into being about 1942 thanks to the founder, Etienne Grangeon. The estate takes its name from the lieu-dit, le Cristia, where they have some of their vines. The vineyard is placed not far from the village of Courthezon, which is where the domaine is based.

At first, the Chateauneuf du Pape estate of Domaine Cristia owned about two hectares of Grenache vines in the Southern Rhone Valley. In the early days, like most producers in the appellation, their wines were sold in bulk to negociants.

Etienne Grangeon was able to enlarge their vineyard holdings thanks to the efforts of his son Alain Grangeon. Alain slowly began bottling some of their production.

In the beginning, it was only about ten percent. The amount of wine was not really enough to be sold on a commercial basis. In those early days, the wines of Domaine de Cristia went to family and friends. It was Alain Grangeon who decided to plant other varietals in their vineyards like Mourvedre and Syrah.

Things changed in 1999, when the next generation became involved with the family business at Domaine de de Cristia. Baptiste and Dominique Florent also joined the estate that year.

One taste of the wines being made currently at Domaine de Cristia and you can easily see that the wines have never been better. Some of the recent changes have been to practice biodynamic farming techniques. In 2008, Domaine de Cristia was certified as Agriculture Biologique by Ecocert. 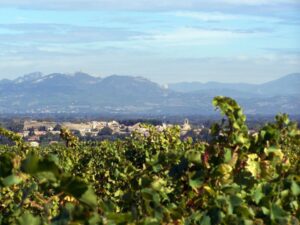 Domaine Cristia has 13 hectares of vines in Chateauneuf du Pape. 12 hectares are reserved for producing red wine and 1 hectare is used for the production of white Chateauneuf du Pape wine. The parcels are in different locations and terroirs in the appellation.

Although most of the vineyards in the northern part of the appellation. They have vines planted in sand, limestone, loam and even a minor portion has the highly valued, stony soils. They have old vines. They own Grenache vines that range from 50 years of age to over 100 years. Their Mourvedre and Syrah plantings are on average, 50 years old as well.

Domaine de Cristia Chateauneuf du Pape is made from 85% Grenache, 15% Syrah, although some vintages have included Mourvedre in the blend. The average age of the vines used varies from 50 to 100 years of age. The terroir is pure sand soils. The vines are planted in the le Crista vineyard.

The grapes are 100% destemmed. Vinification takes place in concrete vats. The Grenache is aged in tank while the Syrah is aged in foudre for 18 months before bottling. The production is about 3,000 cases per year.

Domaine de Cristia Cuvee Renaissance comes from a blend of 60%, 100 year old vine Grenache and 40% Mourvedre. Although in some vintages, Syrah is often added to the blend.

The terroir is sandy soils in the Cristia and la Font du Loup lieux-dits. The Grenache is aged in demi-muids and the Syrah and Mourvedre can be aged in up to 33% new, French oak barrels for 18 months before bottling. On average, 500 cases are produced per year.

Domaine de Cristia Cuvee Vieilles Vignes is clearly their top wine. The wine is made from 100% old vine old Grenache that ranges from 70 to 80 years of age. Some vines are even older. The vines come from their parcels planted in sandy soils of the Cristia lieu-dit. The grapes are 100% destemmed.

Domaine de Cristia Chateauneuf du Pape Blanc is a blend of 30% Grenache Blanc, 30% Clairette, 30% Roussane and 10% Bourboulenc. 90% of the wine is aged in steel vats and 10% is aged in new, French oak for 8 months. 425 cases are produced each year.

Domaine de Cristia Vieilles Vignes Blanc is one of the few white Chateauneuf du Pape wines made from 100% Grenache Blanc. The vines are old, ranging from 55-85 years of age. The modern styled wine is aged in 100% new, French oak barrels for 8 months. Only 100 cases are produced each vintage.

Domaine de Cristia can be enjoyed on the young side. Young vintages can be popped and poured, or decanted for about 1-2 hours or so. This allows the wine to soften and open its perfume. Older vintages might need very little decanting, just enough to remove the sediment.

Domaine de Cristia is usually better with 3-5 years of bottle age. Of course that can vary slightly, depending on the vintage. In the best vintages the wine should be consumed within 4-20 years after the vintage.

In 2009, Baptiste Grangeon of Domaine Cristia and Peter Weygandt formed a partnership to produce wines under the name of Chapelle St. Theodoric. Domaine de Cristia also produces wine from 8.5 hectares of vines they own in the Cotes du Rhone appellation.