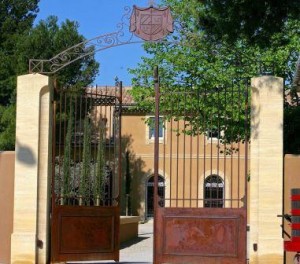 Learn everything about Domaine de Beaurenard, Chateauneuf du Pape with wine tasting notes, wine, and food pairing tips, best vintages, a history of the property, information on the vineyards and winemaking. If you want to read about other important wineries and winemakers from the Rhone valley: Links to all Rhone Valley Wine Producer Profiles

Domaine de Beaurenard is another Chateauneuf du Pape estate that can be called a true, family affair. That’s because the vineyards have been in the same family for 7 generations. Domaine de Beaurenard dates way back to 1695. At the time, it went under the name of “Bois Renard,” which as you might guess, is where the special Cuvee, used for both their red and white wines got its name.

Due to the worldwide depression that was just starting to sink in, this was as you might imagine, quite a difficult way to start a new winery in the Southern Rhone Valley. However, as you can easily see, they survived and prospered.

Domaine de Beaurenard remains a family run estate. The sons of Daniel Coulon are becoming increasingly involved with the property. Over the next several years, you can expect that Antonin Coulon and Victor Coulon will eventually take over managing the property.

They have a terroir with clay, limestone, and large stones in the soil. They have old vines, with some of the Grenache dating back over 100 years. Domaine de Beaurenard also owns 15 hectares of vineyards in the Cotes du Rhone Villages and 62 hectares of vines in the Rasteau AOC.

While Domaine de Beaurenard grows all 13 Rhone allowed grape varieties for use in their red wine, the primary grapes used in the blend are; Grenache, Syrah, Mourvedre, Cinsault, and tiny amounts of Counoise, Muscardin, Terret and Vaccarese.

For their Chateauneuf du Pape Blanc, they primarily use Clairette, Roussanne, Bourboulenc, Grenache Blanc, Picardan and Picpoul in the blend. The vineyards of Domaine de Beaurenard are planted with vines that are close to 45 years of age.

They have taken this a step further here however as they now have their own massal selection program. To create their massal selection, starting in 2007, they took cuttings from each of the 13 grape varieties planted that were considered old vines, (more than 100 years of age) and placed those in a specific 1-hectare parcel to aid in the propagation of their genetic material.

In 2004, the winemaking facilities were modernized. At the time, they added several small, truncated, conical, oak vats. With a total of twenty-four temperature-controlled, stainless steel vats, they are able to vinify on a parcel by parcel basis. After finishing the alcoholic fermentation, the wine is moved into oak barrels for malolactic fermentation.

The wine is aged in three different sized vats, 30 hectoliter foudres, 80 hectoliter truncated oak vats, and 228-liter oak barrels for between 9 to 18 months depending on the wine and the character of the vintage.

Domaine de Beaurenard Chateauneuf du Pape is produced from a blend of 70% Grenache, 10% Mourvedre, 10% Syrah with 4% Cinsault, the rest of the blend is from assorted grape varieties. The vines are on average close to 50 years of age. The terroir is galets, sand, and limestone soils.

The wine is aged in a combination of vat, used oak barrels, demi-muids, and 5% new, French oak barrels for 12 to 15 months. The production is close to 6,500 cases per year.

Domaine de Beaurenard Boisrenard is produced from a blend of 60% old vine Grenache and assorted other grape varieties. The vines range in age from 60 to more than 100 years of age.

The grapes are 100% destemmed. The wine is aged in a combination of new and used French oak barrels for up to 18 months, giving the wine a plush texture in a modern style. On average, close to 1,500 cases are produced each year. The wine was first produced from the 1990 vintage.

Domaine de Beaurenard Chateauneuf du Pape Homerus de Beaurenard is the newest wine from the Coulon family, making its debut its the difficult 2013 vintage. The wine is made from a selection of barrels in the cellar.

The blend is on average 65% Grenache, 15% Syrah, 10% Mourvedre, and the comes from Cinsault and other allowable grape varieties, similar to what you find in the standard Chateauneuf du Pape. The wine is aged in a combination of old foudres and oak vats.

Domaine de Beaurenard Gran Partita made its debut with the 2012 vintage. The wine is produced from blending a high percentage of Grenache with an average of 10% white wine, grape varieties and various other, allowable grapes. The wine is aged for about 18 months in old foudres and for an additional 6 months in cement tanks. Only 400 cases of this wine are made.

Domaine de Beaurenard Blanc is made from 27% Clairette, 26% Roussanne, 25% Bourboulenc and 1% Picpoul with 1% Picardan. The wine is aged in vat for 90% of the production. The remaining portion is aged in French oak barrels for 6 months. Close to 800 cases are produced each year.

Domaine de Beaurenard Boisrenard Blanc is made from the estates oldest vines which are more than 70 years of age. The blend comes from 30% Clairette, 25% Roussanne, 20% Bourboulenc, 20% Grenache Blanc, 2.5% Picardan and 2.5% Picpoul.

The wine is aged in a combination of new and used, French oak barrels for 6 to 10 months before bottling. The production is quite small with close to 225 cases made each vintage.

Domaine de Beaurenard can be enjoyed on the young side. Young vintages should be decanted for 1-2 hours. This allows the wine to soften and open its perfume. Older vintages might need very little decanting, just enough to remove the sediment.

Domaine de Beaurenard is usually better with 3-6 years of bottle age. Of course, that can vary slightly, depending on the vintage. In the best vintages, the wine should be consumed within 8-16 years after the vintage.

The white wine of Domaine de Beaurenard is best served with a myriad of different seafood dishes, shellfish, crab, lobster, sushi, sashimi, chicken, pork, and veal, as well as Asian cuisine and cheese.