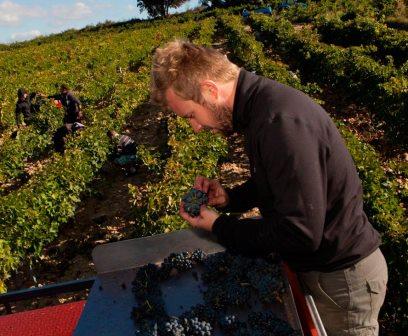 Learn everything about Domaine La Barroche Chateauneuf du Pape, with wine tasting notes, wine, and food pairing tips, best vintages, a history of the property, information on the vineyards, and winemaking. If you want to read about other important wineries and winemakers from the Rhone valley: Links to all Rhone Valley Wine Producer Profiles

In fact, they date all the way back to the 17th century. Domaine la Barroche was founded when Alexandre Barrot began obtaining land in Chateauneuf du Pape. Those original purchases, which became what we know of as Domaine la Barroche, along with more land bought at later dates, have remained in the hands of the same family for hundreds of years.

The beginning of the modern era for Domaine la Barroche starts in 1972 when the Barrot family, headed by Christian Barrot began expanding their vineyards in Chateauneuf du Pape.

In 1972, the estate was only slightly more than 2 hectares in size. At the time, their fruit was bought by negociants and sold under the name of “Lou Destre d’Antan.” The name was a homage to his grandfather.

The next jump forward for Domaine la Barroche occurred in 2002 when the son of Christian Barrot, Julien Barrot joined the family business. The following year, 2003 was the first time people began taking notice of what was taking place with the wines of Domaine la Barroche.

One of the first improvements at the estate Julien Barrot requested was the addition of three new vats that would allow for the fermentation process to take place based on specific parcels or grape varieties.

In 2006, the young Julien Barrot was given a lot more responsibility and things have never been the same. Today, the charming Laetitia Barrot Latour helps her brother, Julien Barrot in managing the estate.

In 2015, Domaine la Barroche completed a massive renovation and modernization of all their cellars and wine-making facilities including adding new, conical-shaped concrete vats for fermentation. The estate now partially destems their grapes and most of the aging takes place in foudres. 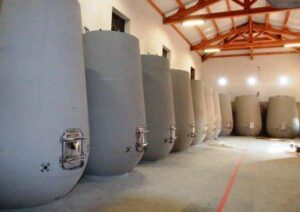 Currently, Domaine la Barroche owns 15.5 hectares of Chateauneuf du Pape vineyards on stony, sandy terroir, dedicated to the production of red wine. Although there are portions of the vineyards that are not currently in production.

While their best terroir is sand and rock-covered soil, you also find limestone and even red clay and iron-enriched sandstone soils.

One of their best terroirs is located next to Chateau Rayas. Most of their vineyards are situated in the northern part of the appellation. They have old vines which average more than 70 years of age. However, they have very old vines as well.

In fact, some of which are more than 100 years ago! While Grenache is of course their primary grape planted, they have smaller plantings of Mourvedre, Syrah, Cinsault, Clairette Blanche, Vaccarese, Terret Noir, and Clairette Rose.

While most of their vineyards are planted to red wine grape varieties, in their holdings, .5 hectares are reserved for the production of white wine grapes for Chateauneuf du Pape Blanc.

At Domaine la Barroche, the fruit is sorted in the vineyards and again at the cellars before being cold macerated, prior to harvest. A portion of the Grenache can be whole cluster vinified. The wine is aged in concrete vats, small barrels, or large foudres. The grape variety determines which vessel is used.

Domaine la Barroche has added and removed from their lineup of wines produced at the estate since 2003. By 2006 they were releasing 4 different wines. That is no longer the case.

In 2015, they added a new wine to their portfolio, La Barroche Liberty, which is sold as a Vin de France.

However, starting with the 2016 vintage, La Barroche added a white Chateauneuf du Pape to their portfolio, Pure Blanc. In total, the average annual production is about 3,000 cases of wine per vintage.

Domaine la Barroche Cuvee Pure – Pure is produced from between 97% old vine Grenache to 100%% depending on the vintage, hence the name Pure. The label is stark white, to further the Pure theme. The terroir is pure sandy soils in the Grand Pierre, Rayas and Pointu lieux-dits. The vines are old, having been planted back in 1901.

The vines are quite close to Rayas. The grapes are partially destemmed. The vinification is conducted in concrete vats. Malolactic fermentation takes place in tanks. The wine is aged one, large, old oak foudre for about 18 months before bottling.

This wine can be quite difficult to find as less than 300 cases per year are produced. For some reason, at least with the 2007 vintage, two separate bottling’s were produced, one was filtered and the other was unfiltered. There is no way to tell which you’re buying.

Domaine la Barroche Signature, produced from a blend that varies from 65% Grenache, 15% Mourvedre, 15% Syrah, and a portion of Cinsault, along with various allowable grape varieties. The terroir is a mix of sand, stone, and clay soils.

The vines are quite scattered over the appellation as they are planted in the Bois Dauphin, Cabrieres, le Grand Pierre, les Mascaronnes, Palestor, le Parc, le Pied Long, Pierre a Feu, Pointu, and Rayas lieux-dits. The grapes are partially destemmed grapes for this wine come from vines that vary in age from 18 years of age up to 100 years in age.

La Barroche Signature is aged in a combination of foudres and stainless steel vats. The Grenache is aged in foudres, the Syrah and Mourvedre are aged in French oak barrels and demi-muids, and the Cinsault is aged in concrete vats for an average of 18 months.

Domaine La Barroche Liberty – The wine is made from old vines, many of which are almost 70 years old. Dominated by Grenache, the fruit comes from vines placed in both the Cotes du Rhone appellation and in Chateauneuf du Pape.

Due to AOC laws, because the grapes come from 2 different appellations La Barroche Liberty is sold as a Vin de France, and not a Cotes du Rhone. The first vintage was produced in 2015.

La Barroche Liberty comes from a blend that is on average 55% Grenache, 18% Syrah, 12% Mourvedre, 2.5% Carignan, and 2.5 Cinsault, although that can vary, depending on the vintage. La Barroche Liberty while quite tasty, is a wine to drink in its youth, between 5-7 years of age.

Domaine La Barroche can be enjoyed on the young side. Young vintages can be popped and poured, or decanted for 1-2 hours or so. This allows the wine to soften and open its perfume. Older vintages might need very little decanting, just enough to remove the sediment.

Domaine La Barroche is usually better with 3-6 years of bottle age. Of course, that can vary slightly, depending on the vintage. In the best vintages, the wine should be consumed within 8-20 years after the vintage.

The following two wines from Domaine la Barroche are no longer in production.

Domaine la Barroche Terroir, produced from young vines, is made from 95% Grenache. The vines are among the youngest of their holdings, belonging to Barroche as they are between 15 to 20 years of age. The production averages 1,750 cases per vintage. 2010 was the final vintage.

Domaine la Barroche Cuvee Fiancee – Made from 50% Grenache and 50% Syrah, the vines range in age from as young as 25 years, to as old as more than 100 years of age. The old vine Grenache comes from the Terres Blanches vineyard and the Syrah is planted in the Cabrieres lieu-dit.

The wine is aged for 18 months, give or take, in large, oak barrels. The production is quite small, with an average of only 350 cases per vintage.