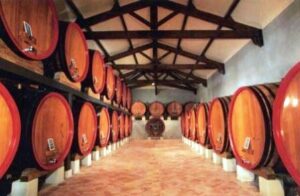 Learn everything about Caves Saint Pierre Chateauneuf du Pape with wine tasting notes, wine and food pairing tips, best vintages, a history of the property and information on the vineyards and winemaking. If you want to read about other important wineries and wine makers from the Rhone valley: Links to all Rhone Valley Wine Producer Profiles

Caves Saint Pierre La Tiara du Pape is produced from 60% Grenache, 30% Syrah, 7% Mourvedre and 3% of assorted grape varieties. The wine is aged in a combination of old foudres and used oak barrels for 12 months before bottling. On average, the production is close to 3,000 cases per year.

Caves Saint Pierre Dedication is produced from a blend of 60% old vine Grenache, 20% Syrah and 20% Mourvedre. The wine is aged in used, French oak barrels for 12 months before bottling. The production is on average, 500 cases per year.

Caves Saint Pierre La Tiara du Pape Blanc is made from a blend of 60% Grenache Blanc, 20% Roussanne, 15% Bourboulenc and 5% Clairette. The wine is aged for 6 months on its lees in a combination of oak barrels and tank.

Caves Saint Pierre is fine to drink on the young side. Young vintages can be popped and poured, or decanted for about 1 hour. This allows the wine to soften and open its perfume. Older vintages might need very little decanting, just enough to remove the sediment.

Caves Saint Pierre is usually better with 2-3 years of bottle age. Of course that can vary slightly, depending on the vintage. In the best vintages the wine should be consumed within 3-10 years after the vintage.