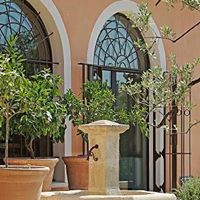 Learn everything about Domaine du Grand Tinel, Chateauneuf du Pape with wine tasting notes, wine, and food pairing tips, best vintages, a history of the property, and information on the vineyards and winemaking. If you want to read about other important wineries and winemakers from the Rhone valley: Links to all Rhone Valley Wine Producer Profiles

What we know of as Domaine du Grand Tinel is actually one of the older estates in the Southern Rhone Valley. In its formative years, during the late 1700s, the property was known as Chateauneuf Calcernier. Over time, the property continued adding more land to their vineyards.

In 1846 the Domaine changed its name to Petit Gardiole. In 1906, the property became one of the first Chateauneuf du Pape producers to bottle their own wine. In 1972 the vineyard once again changed its name to what we know of today as Domaine du Grand Tinel. The inspiration for the name comes from the word Latin word for cask which can be translated into tina.

Their oldest Grenache vines date back more than 100 years. Some of 4.5 hectares of vineyards in the lieu-dit of La Gardiole to the north were planted with Grenache. 3 hectares are used to produce Chateauneuf du Pape Blanc.

Domaine du Grand Tinel Tradition – 83% Grenache, 12% Syrah, 2% Mourvedre, 2% Counoise and various other allowable Rhone grape varietals. The terroir is a mix of rocks, and sand. The wine is aged 12 to 16 months in a combination of old foudres, demi-muids, and tanks. The production is close to 11,500 cases per year.

Domaine du Grand Tinel Cuvee Alexis Establet made its debut in 1997. The wine is made from 100% old, vine Grenache from the rock and sand terroir found in the soils of the La Gardiole lieu-dit.

This modern-styled wine is aged in a combination of 35% new French oak barrels, used oak casks, demi-muids, and foudres for an average of 12 to 18 months. The wine is only made in the best vintages. The production is about 1,300 cases per vintage.

Domaine du Grand Tinel Cuvee Heres is made exclusively from 100% old vine Grenache. In this Cuvee, the fruit comes from the estate’s oldest vines, which are all over 100 years of age.

The terroir is evenly split between rocks and sand. To produce the wine, the berries are destemmed 100% and aged in vat for 12-14 months. Production is quite limited as close to 350 cases per year are produced.

Domaine du Grand Tinel Blanc is made from blending 60% Grenache blanc, 20% Clairette and 20% Bourboulenc. The wine is aged in steel vats with a small portion aging in new, French oak barrels. The production is close to 1,000 cases per vintage.

Domaine du Grand Tinel can be enjoyed on the young side. Young vintages can be popped and poured, or decanted for 1-2 hours give or take. This allows the wine to soften and open its perfume. Older vintages might need very little decanting, just enough to remove the sediment.

Domaine du Grand Tinel is usually better with 3-5 years of bottle age. Of course that can vary slightly, depending on the vintage. In the best vintages, the wine should be consumed within 5-14 years after the vintage.

Domaine du Grand Tinel also produces red wine from the Cotes du Rhone appellation from 18 hectares of vines they own in the region.