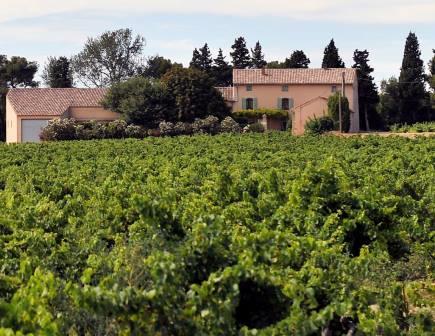 Learn everything about Domaine de Panisse Chateauneuf du Pape with wine tasting notes, wine and food pairings, best vintages, a history of the property and information on the vineyards and winemaking. If you want to read about other important wineries and wine makers from the Rhone valley: Links to all Rhone Valley Wine Producer Profiles

Domaine de Panisse has a long history in the Southern Rhone Valley dating back almost 600 years. In 1492, the domaine was the property of the Lord Dominique of Panisse, which as you can see, is where the domaine took its name from. The modern era for Domaine de Panisse starts in 1992, when the vineyard was purchased by Christine Olivier and Jean Marie Olivier.

Domaine de Panisse Confidence is produced from a blend of 80% Grenache, 10% Mourvedre and 10% Syrah. Here you find limestone, rocks and sand in the terroir. The grapes are not destemmed. The wine is aged in a combination of 50% used, French oak barrels and the remaining 50% of the wine is aged in tank for 12 months. On average, 350 cases are produced each year.

Domaine de Panisse Noble Revelationis a blend of 50% old vine Grenache that comes from vines that range in age from as young as 30 years to almost 90 years of age, (with most of the fruit coming from 80 year old vines) 30% Mourvedre and 20% Syrah.

Panisse Noble Revelation is aged in used, French oak barrels for 12 months. The production is on average, 125 cases per year.

Domaine de Panisse can be enjoyed on the young side with about 1 hour of decanting, more or less. This allows the wine to soften and open its perfume. Older vintages might need very little decanting, just enough to remove the sediment.

Domaine de Panisse is usually better with 2-4 years of bottle age. Of course that can vary slightly, depending on the vintage. In the best vintages the wine should be consumed within 4-14 years after the vintage.