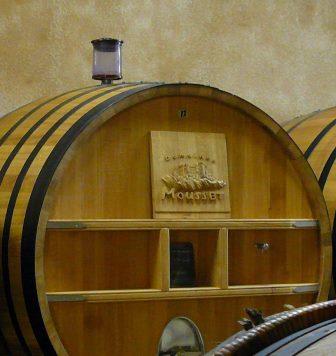 Learn everything about Clos Saint Michel Chateauneuf du Pape with wine tasting notes, wine and food pairings, best vintages, a history of the property, and information on the vineyards and winemaking. If you want to read about other important wineries and winemakers from the Rhone valley: Links to all Rhone Valley Wine Producer Profiles

Clos Saint Michel has been managed by its current owners, the Mousset family since the 1950s. The original farmhouse on the property predates the family ownership by several decades. In addition, the Mousset family, headed by Frank Mousset and Olivier Mousset also own Domaine des Saumades.

While the Mousset family has managed Clos Saint Michel for more than 6 decades, they have been active in the Southern Rhone as winemakers for longer than that. Olivier Mousset and Franck Mousset represent the 4th generation in their family to make and produce wine at Clos Saint Michel.

Of the estates 14 hectares of vineyards in Chateauneuf du Pape, 12.6 hectares are used to produce red wine. The remaining 1.4 hectares are for the growing of white wine grapes.

In total, at the moment, Clos Saint Michel produces 4 red wines and 1 white wine from Chateauneuf du Pape as well as wine from Cotes du Rhone.

Clos Saint Michel Tradition is made from 40% Grenache, 30% Syrah and 30% Mourvedre. The terroir is pure rocks and stones. The vines are planted in the Les Coulets vineyard. The wine is aged for 12 months in vats. Close to 3,500 cases are produced each vintage.

Clos Saint Michel Cuvee Reserve is from vines more than 50 years of age. The blend is usually 40% Grenache, 30% Syrah, and 30% Mourvedre.

The terroir is pure rocks and stones. The vines are planted in the les Coulets lieu-dit. The wine is aged in used French oak barrels for up to 24 months, depending on the character and quality of the vintage.

Clos Saint Michel Homage To Heritage is the newest addition to their portfolio. The wine, which is made from a probably unique blend of 50% Grenache, 30% Syrah, and 20% Grenache Gris, has a unique style. The wine is aged entirely in concrete vats. The first vintage produced was produced from the 2013 vintage.

Clos Saint Michel Grand Clos Grand Reserve is produced using only 100%, old vine Mourvedre. The wine is aged in a good portion of new, French oak barrels. Not much of this beauty is produced. On average, slightly more than 800 cases are made in a good vintage. The wine is not produced every year. In fact, until recently, the wine was not produced since 2004. However, the wine was most recently produced in 2020.

Clos Saint Michel Coteau Brule is the newest wine from the property, focusing on Syrah. The wine is made from a blend of 80% Syrah and 20% Grenache.

Clos Saint Michel Le Grand Vin is a blend of 50% Grenache and 50% Syrah. The terroir is clay, limestone, and rocks. The wine is aged for an average of 12 months in French oak barrels before bottling. The production is limited to roughly 450 cases of wine per vintage.

Clos Saint Michel Chateauneuf du Pape Blanc is a blend of 30% Grenache Blanc, 30% Clairette, 20% Roussanne and 20% Bourboulenc. The wine is aged in a combination of stainless tanks and French oak barrels.

Clos Saint Michel can be enjoyed young with decanting of about 1 – 2 hours, give or take. This allows the wine to soften and open its perfume. Older vintages might need very little decanting, just enough to remove the sediment.

Clos Saint Michel is usually better with 3-5 years of bottle age. Of course, that can vary slightly, depending on the vintage. In the best vintages, the wine should be consumed within 8-20 years after the vintage.